Krista Siegfrids — Finland’s Eurovision 2013 singer and the winner of the second edition of Uuden Musiikin Kilpailu (UMK) — can do many things. She can release hit singles such as “On & Off” and “Better On My Own“. She can convince her boyfriend to marry her. And she can even deliver a lesbian kiss felt all the way from Turkey to China. But can Krista, one of the 28 acts to sing in Melodifestivalen 2016, compete in her Melfest heat while also hosting Finland’s national selection for Eurovision?

Krista Siegfrids in Melodifestivalen 2016 — and UMK

As Krista prepares to wow audiences in Sweden, she won’t leave Finland behind completely. Earlier this month it was announced that Krista will co-host Uuden Musiikin Kilpailu (UMK) 2016, Finland’s Eurovision selection. That’s great, but there is one problem. The second deltävling of Melodifestivalen will be held in Malmö on February 13 — on the same day and time as the second semifinal of UMK. Talk about a scheduling conflict.

How will she do it?

In a video posted on UMK’s Facebook page, Krista answers that very question. She says that there is no need to worry and that everything will go swimmingly — hey, it’s easy to get between Sweden and Finland. If she’s in a pinch, she will take a helicopter from Helsinki to Malmö. It seems that Krista has planned all of this very carefully with UMK producers ahead of time. She’s a woman in control…

Krista isn’t the first artist to competing in Melodifestivalen while hosting a national final in another country.

Back in 2009 Norwegian singer Maria Haukaas-Mittet (née Storeng) participated in Melodifestivalen with “Killing Me Tenderly“. At the same time she co-hosted Melodi Grand Prix in Norway. Of course, she had one big advantage: the dates didn’t clash! 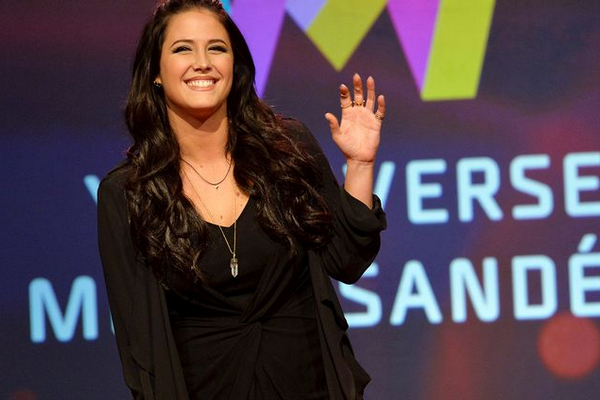 OK, but can someone explain me why is Krista’s Instagram verified while Emmelie de Forest’s isn’t?

UMK is pre-recorded…I think.
So why is Krista making this “games”? [helicopter ? ridiculous MF and UMK are at the same hour no? ]
Of course she knew in advance which were chosen for the Melodifestivalen there would be no problems with the UMK and SVT is not stupid to put Krista in 2ºsemifinal knowing that she already is a host in another show in the same day.

She’s free to do whatever she wants and I praise her for doing it precisely on the same year and even more, the same day. She gets a whole new level of respect from me for doing that, because I bet it won’t be easy even though I’m sure she’s completely capable of it.

This world is not a big pig pen where you can only stay in a tiny little circle. Music dose not have nationnalities. Love krista anyway<3.

Krista is a Finno-Swede, Swedish is her first language, and thus it’s not surprising why she’d want to try for MelFest. However doing so in the same year that she’s hosting UMK is a conflict of interest and doesn’t exactly say team spirit.

The reason why Helena Paparizou and Anna Vissi could represent two countries was because they did so in separate years.

Besides, what can win UMK can’t win MelFest. Krista will need to up her game.

Good point, Robyn – or like when Jedward from Ireland were in the UK X Factor!

I am so excited to see Krista sing in Swedish! Best of luck to her!

Hippo – Same as I, my father is Finnish and my mother is Lithuanian, but I was raised in Sweden. However I disagree. I feel a close connection with all 3 of my countries, and I assume it’s the same thing for Krista, so I understand why she’d want to represent Sweden and Finland.

D – That does change things then, and I can identify with that somewhat (my parents are different nationalities) but I still think she should choose one country to represent whatever the circumstances, if she feels swedish she shouldn’t have represented Finland. I don’t have anything against her, but it just looks in these cases that the participant is only in it to further their own careers rather than represent their country.

@Hippo – While I agree with you about not liking artists represent a country they have no connection to, that isn’t exactly the case here. Krista is ethnically Swedish and Swedish is her first language. She was just raised in Finland.

I never like to see artists sing for countries they don’t have much to do with. I know Scandinavians get on well together but this is pushing it. My prediction? Dropped by umk or realises herself it’s not possible to do both and only does Melodifestivalen, fails to win, and damaged image in Finland. Not much good can come from this.

I’m finnish and i’m proud she is brave enough to do this. I hope she will become international star. She deserves it. she has done so much job for this, and she is talented and does everything 100% on.

To me….that’s awkward. If I was Finnish, I would feel slightly offended that she would prefer to sing in the Swedish contest than represent Finland again. Hmm..oh well, either way, best of luck to her in both roles.