Every day until December 24, we’re stuffing your stockings with a new Eurovision poll and asking for your opinion about important matters such as the best edition of Eurovision and the best Israeli entry over the past ten years. Consider this our advent calendar for 2015. Whether you celebrate Christmas or not, you can let us know your thoughts each and every day by casting your vote and sounding off in our comments section. Let’s open the door to today’s poll!

Day 15: From singer to host

Yesterday it was revealed that Eurovision 2015 winner Måns Zelmerlöw will host next year’s contest together with Petra Mede. Måns will follow in the footsteps of Conchita Wurst, Eldar Gasimov and Marie N, who all hosted the contest (in some capacity) after winning it the previous year.

But they aren’t the only former Eurovision entrants who later served as a presenter. Which of them did it best? We aren’t asking for the best song, but rather for the best host. Click the name of all your favourites in our poll and then press submit. You can vote for as many people as you like, but you can only vote one time.

Corry Brokken took part in Eurovision three times, winning the second edition of the contest in 1957 with “Net als toen”. After Teach-In won the contest for The Netherlands, Corry was invited to host the contest in The Hague.

Yardena sang for Israel in 1976 as part of Chocolate, Menta, Mastik and placed sixth with “Emor Shalom”. A few years later, Israel won the contest for the first time and Yardena had the honour of hosting the contest from Jerusalem. In 1988 Yardena returned to the contest with “Ben Adam” and finished seventh.

Lill Lindfors sang “Nygammal Vals” together with Svante Thuresson back in 1966. Sweden won the right to host the contest in 1985, after Herreys’ victory. Lill Lindfors caused drama by having a wardrobe malfunction on the stage — which was planned beforehand.

Åse Kleveland was the first woman who didn’t wear a dress during her performance. She finished third in 1966 with “Intet er nytt under solen”. Bobbysocks took Norway’s first victory in 1985 and the next year Åse presented the contest from Bergen.

Toto Cutugno was the first winner to host the contest the next year. He was joined by another Eurovision winner, Gigliola Cinquetti who sang “Non ho l’età” in 1964 and later returned to the contest with “Sì“. Most of the evening Toto and Gigilola used Italian, giving the international commentators a lot of work to do at home.

Dana International took the victory for Israel with “Diva” in 1998 and the following year the contest was held in Jerusalem for the second time. For the first time ever the contest had three presenters. One of them was Dafna Dekel, who sang for Israel in 1992. She finished sixth with “Ze Rak Sport”.

Marie N was Latvia’s first ever Eurovision winner, and by winning in 2002 with “I Wanna”, she brought the contest to Riga. Marie got another former Eurovision singer — Renars Kaupers — as her co-host. Renars finished third with his band Brainstorm and their song “My Star” when Latvia debuted at the contest in 2000.

Turkey won the contest on their 26th try in 2003, when Sertab Erener sang “Everyway That I Can”. The next year Sertab hosted the green room, with Meltem Cumbul and Korhan Abay serving as the main hosts.

Sakis Rouvas sang “Shake It” in 2004 and finished third. Helena Paparizou’s victory with “My Number One” brought the contest to Athens and Sakis hosted the contest together with American actress Maria Menounos. He returned to the contest in 2009 with “This Is Our Night”.

Željko Joksimovic finished second behind Ruslana in 2004 with “Lane moje”. After debuting as a independent country in 2007, Serbia took victory on their first try. Željko hosted the event from Belgrade together with Jovana Jankovic — whom he later married.

Alsou represented Russia in 2000 with “Solo” and placed second after Denmark. Later Dima Bilan brought the contest to Moscow with “Believe”. Alsou was invited to host the grand final together with Ivan Urgant while Russian television personality Andrey Malakhov hosted the semifinals with model Natalia Vodianova.

Stefan Raab sang “Wadde hadde dudde da?” for Germany in 2000 and finished fifth. He also mentored Lena for her victory in 2010 and got the right to host the contest in Düsseldorf. He was joined by Anke Engelke and Judith Rakers.

Eldar Gasimov brought the contest to Baku by winning together with Nigar Jamal on “Running Scared”. Once again there were three hosts — Leyla Aliyeva, Nargiz Birk-Petersen and Eldar himself.

Conchita Wurst — the winner of Eurovision 2014 — joined an all female line-up when hosting the green room in 2015. Mirjam Weichselbraun, Alice Tumler and Arabella Kiesbauer hosted the contest from the main stage. 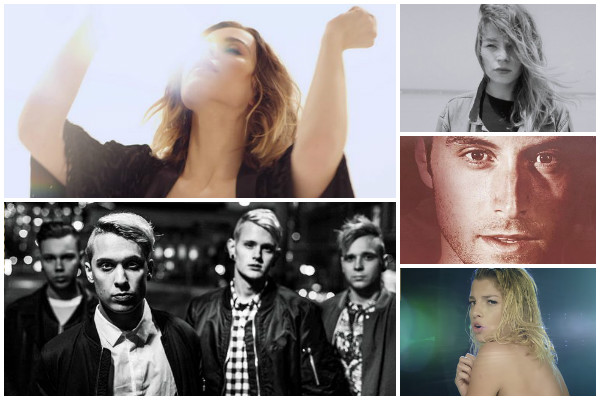 Conchita was the best for me. Funny,clever and posh !

For me Marie N was so rude to France spokerson , Francoise who represented France 2002 , when Maria won the contest for Latvia.https://www.youtube.com/watch?v=LOKiw9-zSsA

What 30 crazy people thought Eldar Gazimov was worth voting for?

Don’t tell me Azerbaijan are attempting to rig this poll too!

I’m sure he’s a nice guy, but as a host? Dreadful.

Renars is a darling human macaroni and Marie N is pure sunshine. Well, our southern neighbors, they are slightly more energetic than us.
Quite liked Conchita, she was very considerate and not too pushy. Really hated that Swedish poodlehead though (not the host, but…whoever). Very annoying.

Marie N was a fabulous hostess, although she sucks as a winner – hehe.

Lil Linfors was great too, best Swedish host of all times.

For me Lill Lindfors (1985), she is best host till now for me at Eurovision. She can teach Petra how to be funny .

Rigged! Conchita was horrible and Marie N and Renars Kaupers (2003) don’t even have a box to vote for them.

We apologize for missing Marie N and Renards from the poll, but everyone makes mistakes. They are added now 🙂

I forgot to include Stefan and Alsou among the few decent hosts, and Željko was OK too.

Marie N and Renars Kaupers were great (why aren’t they in the poll?) as was Lill Lindfors. Corry Brokken and Yardena Arazi did an OK job I guess.
The rest should have stuck to their day job and left hosting to worthier professionals.

Lili, Ase, Alsou and Stefan for me.

Toto – worst ESC host ever! Be funny if Italy ever won again, would they hire bad hosts again?

Would of been easier choosing the worse ones roslana was terrible in the green room!

Toto shouldn’t even be an option! 1991 was a mess! 2012 and 2015 hosts were definitely the weakest of this century (sorry Eldar and Conchita)! Stefan was by far the most entertaining although I did love Sakis, Alsou & Željko as well !

Marie N was awesome, actually looked like a professional presenter. The others were there for showing off instead of being good at their job that evening.

AND NO WAY TO VOTE FOR HER 🙁

Lill Lindfors … and nobody else! Even her rehearsed dress malfunction still looks far more entertaining and more natural than all the crap they try to set up today … The whole Conchita thing was just a “focus on me” moment and not a real hosting performance as far as I am concerned.

Probably should votefor everyone but Toto.

Toto will remain in history as the worst presenter EVER! hahahahaha

Sakis – gliding in a shiny golden suit was just ridiculous.

Ahem … The poll does not have a button for Marie and Renars. Not so much Riga’d as RIGGED? … ;P