In less than two months the Ariston Theatre will crank up the lights for the 2016 edition of the Sanremo Music Festival. Twenty artists will hit the stage and one will earn the right to represent Italy at the next Eurovision Song Contest. We’re super excited to discover who will take the baton from Il Volo!

Carlo Conti, the host and artistic director of the show, recently announced the participating artists. Even more interesting, however, is that the tanned presenter revealed details about the content of their entries. Over the past sixty years Sanremo has guarded info about the songs, treating them as state secrets until the first performance on the stage. Grab the popcorn and let’s discover what he told TV Sorrisi e Canzoni…

ANNALISA
She is making a comeback. In the last edition she achieved a great result, placing fourth in the final ranking. She’s a great singer with a wonderful voice. With her new entry “Il diluvio universale”, Annalisa will have another opportunity to demonstrate her qualities as a performer.

ARISA
She’s a Sanremo creature. And Sanremo just won’t do without her. She won both the “Newcomers” and the “Campioni” section and co-hosted the 2015 edition with me. She’s back with a melodic song, “Guardando il cielo”. An intense, spiritual song different from those she has sung so far.

ALESSIO BERNABEI
He’s a beautiful bet. He left his band, Dear Jack, and now he has to bring the same energy and the same power to the stage. It will be interesting to listen to him with “Noi siamo infinito” — no longer as a frontman, but as a solo artist.

GIOVANNI CACCAMO & DEBORAH IURATO
A couple made by the warmth and the shade of Sicily. Two completely different voices that come together in a curious way for a particularly big track, “Via da qui”, written by Giuliano Sangiorgi. Sanremo has lacked a mixed couple for a long time. [Actually, in 2015, Sanremo saw Grazia Di Michele and Mauro Coruzzi]

CLEMENTINO
It’s curious to note that not long ago the music scene from Napoli was represented by the “neomelodici” [singers from a niche genre sung in Neapolitan and tied to southern Italy. Some famous Italian singers who work in the genre include Nino D’Angelo and Gigi D’Alessio]. In this Festival we’ll have two members of the Neapolitan rap and hip hop music scene: Clementino and Rocco Hunt. Clementino will sing “Quasi lontano”: a rap ballad that makes us think about what it means to be away from our own country.

DEAR JACK
We’ll see how they get on with their new lead singer Leiner Riflessi. Their entry “Mezzo respiro” is a ballad: it has their characteristic energy, but with a more melodic sound.

DOLCENERA
She’s a powerful, gritty songwriter, not only good at writing and playing, but also an extraordinary singer. Her song “Ora o mai più” is difficult to perform but she manages it very well.

ELIO E LE STORIE TESE
What works in a song? The refrain. If it gets stuck in your head,  you’ve made it! Well, their entry “Vincere l’odio” is composed only of refrains, one strictly different from another. They’re absolute genius!

IRENE FORNACIARI
Irene sings “Blu”, a track written by Beppe Dati, an author who has repeatedly triumphed in Sanremo. It’s an important ballad that gently makes us think about the sea of tragedies.

LORENZO FRAGOLA
Sanremo has been his springboard for artists after the X Factor. For him the summer has been full of successes. Lorenzo is a songwriter who can sing both in Italian and English without losing his credibility and this doesn’t happen for everyone. He will sing “Infinite volte”.

FRANCESCA MICHIELIN
Francesca has a remarkable stage presence, a great voice and a beautiful entry, “Nessun grado di separazione”. I think the time has come for her consecration.

MORGAN & BLUVERTIGO
Thank God Bluvertigo are back together to create their own music. In their song “Semplicemente” there is a lovely contrast between the idea we have about Morgan, as a character over the top, and his story about the simplicity of daily life, everything highlighted by his musical genius.

NEFFA
He’s always steady. His entry “Sogni e nostalgia” is so catchy you can’t help but sing along. It will be one of the most whistled songs in the shower. As always, Neffa manages to mix lightness and depth.

NOEMI
A fantastic voice. She’s a great artist who sings the entry “La borsa di una donna”, written by Marco Masini among other authors. The story is of the female universe — through what is enclosed in a woman’s bag.

PATTY PRAVO
An artist who for 50 years has been constantly active and will celebrate this milestone by taking part in Sanremo with “Cieli immensi”, a spectacularly beautiful song with extraordinary atmosphere: it will leave everyone open-mouthed.

ROCCO HUNT
The power of Campania. “Wake up” is an addictive rap track that comes close to dance music, with distinctive rap lyrics.

ENRICO RUGGERI
He’s one of the most appreciated songwriters in our country. Enrico has always been willing to give himself a challenge, to make his own music and present it to the audience. He takes to the Sanremo stage with huge joy, because he already won it twice. In 2016 he will try again with “Il primo amore non si scorda mai”.

VALERIO SCANU
After all the performances he gave life to on the stage of “Tale e Quale Show“, we’ll listen again to his strong voice with the song “Finalmente piove”, written for him by Fabrizio Moro.

STADIO
They have made Italian music history and so they don’t need any introduction. I think of the songs they wrote for other artists, for their own discography and their soundtracks. “Un giorno mi dirai” is a sweet song, a speech from a father to his daughter.

ZERO ASSOLUTO
Thomas De Gasperi and Matteo Maffucci will sing “Di me e di te”: they will make a comeback with their music, their light weight, their carefree attitude and above all their rhythm. 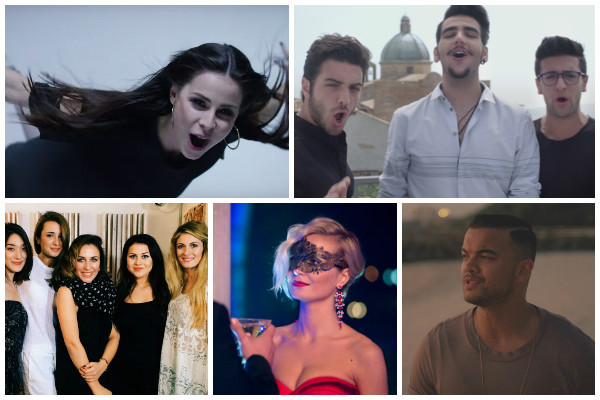 POLL: What is the most Christmassy Eurovision song?

Arisa is trying something unusual?

I ADORE CONTROVENTO, and I would love to see her with such a song at Eurovision – winning.

Francesca Michielin <333
seriously though https://www.youtube.com/watch?v=rMTfM28wAf8 is amazingggg I'm so pumped for her at san remo

Annalisa, Arisa and Noemi are the only singers I would like to see on Stockholm. I don’t want Lorenzo and his silly songs to represent Italy…. “hashtag fuori c’è il sole, lo puoi condividere”….

In the caption it says Annalisa will sing Arisa’s song. Uhhhh….