Ahead of the second show in Belgium‘s three-part Eurosong national final this Sunday, radio station MNM has released short snippets of the five songs. All we’re getting is 11 seconds, but it’s enough to get a taste of what will be offer on Sunday.

Over the past week, the Belgian broadcaster has slowly been releasing details about the five songs that will be battling it out to follow in Loïc Nottet’s footsteps. First we learned the titles, then a brief description, and now a tantalising 11-second snippet.

The second Eurosong show will take place on Sunday at 20:25 CET. The five artists will perform their song for the first time, with the emphasis just being on the song itself, and no staging. They’ll get expert advice from the panel of Belgian singer Tom Helsen and singer-songwriter Beverly Jo Scott (Loïc Nottet’s The Voice Belgique mentor and co-writer of “Rhythm Inside”).

Then the five will return the following Sunday for the grand final where one of the acts will be selected to represent Belgium in Stockholm. But until then, here are snippets of the five songs we’ll be hearing.

What’s the pressure?
You will cope
You will know in the end
That this is fiction…

Update: Want to hear more? 30-second snippets can now be heard over at ÉÉN.

What do you think of these five snippets? Is it enough to pick a winner? Share your thoughts below. Giving us life: Pregnant Kalomira glistens in selfies as she reveals third baby is on the way 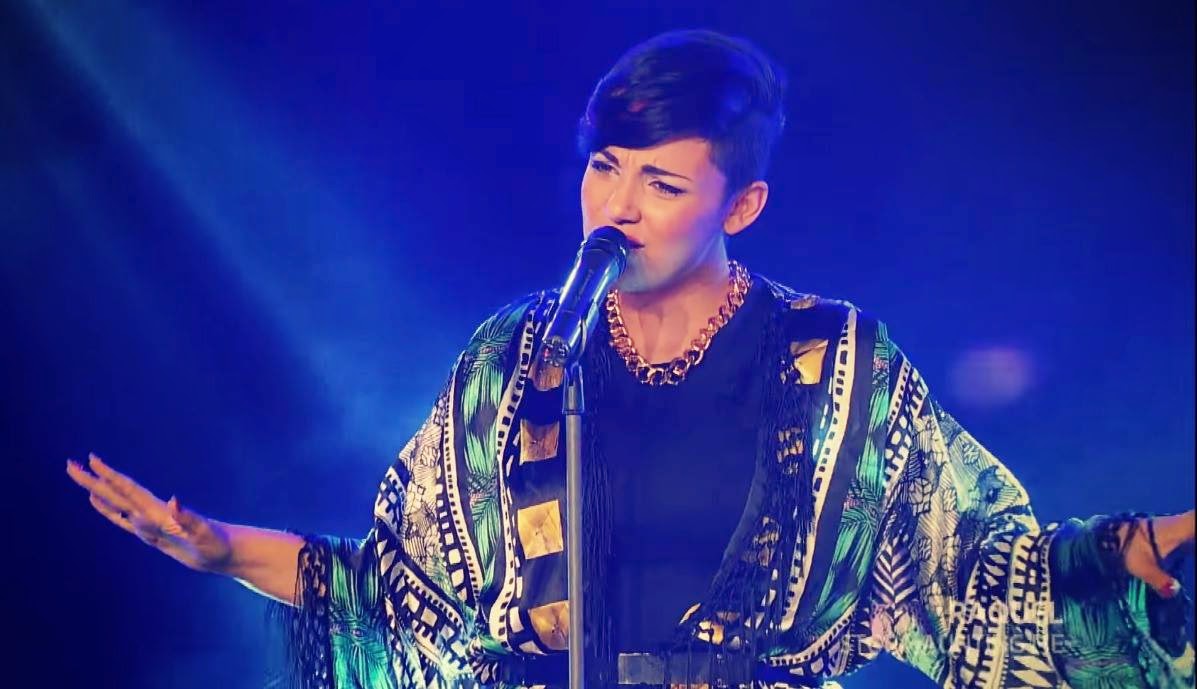 They’re not bad, actually. I din’t expect this. Tom’s snippet is the one I like the most.

@Genevieve, how can you compare Astrid’s song to Lithuania 2014? I don’t see any similarities lol

If you mean Amaryllis instead of Astrid, then I agree 😛

Astrid’s song reminds me of Lithuania 2014 and absolutely not in a good way. My favorites are Tom and Laura so far.

From this little snippet, I think I will enjoy Tom’s song the most. Adil and Astrid also seem like very nice songs. I don’t know what they were thinking when they released Amaryllis’ snippet? Horribly repetitive, doesn’t really make me want to hear the full thing

For friends and fans in the US who can’t see these vids… 🙂 The link below has 25 second clips!

Disappointed by Amaryllis’ song, she was my pick but the song is very meh.

Adil’s feels like the most Stockholm-friendly song, but I’m not enthusiastic about it.

Tom probably has a radio-friendly song, not sure how it would go on stage.

Laura’s might grow on me, seems a little bit too bubbly though from the snippet.

Astrid’s I want to hear a bit more of, but as with the rest… there isn’t a top 10 finish for Belgium in this lot.

AMARYLLIS – “KICK THE HABIT” Is the song I want to hear more of. ‘TOM – “IM NOT LOST” sounds promising but they all don’t inspire me like last year. However I have hopes for the night and looking forward to hearing them all in full.

I remember how disappointed I was when I heard the snippet of ‘Euphoria’ and then in the actual Melodifestivalen … WOW!!!!

Odds suggest either Astrid or Tom- Tom has moved in considerably from 7-1 before songs were revealed.

Very dissapointing. Astrid best of a bad bunch for me. Can’t see them qualifying this year. Also, in our nature reminds me of black smoke.

The others are meh…

In my opinion Astrid is the clear winner.

It’ll be either Tom or Astrid. The rest is unbearable, really. Amaryllis’ song sounds like it’s written by a 10 year old. Yeah, we should kick the habit, we got it. Plus her accent is actually really thick, not that it’s a bad thing, but it doesn’t go well with the song that you can tell was supposed to be delicate. Astrid’s snippet is very memorable, with Tom coming in very close with his One Republic-like anthem. If the rest of their songs are as good, and the staging will be fine, they could end up on the left hand… Read more »

Astrid I think. I’m dissapointed in Amaryllis, because I really like her voice but the snippet just sounds eh.

Astrid for me, though Tom also sounds very good.

Tom has to only song that makes an impact straight away for me. He had the same impact with his cover too. Amaryllis please no, same goes for Adil. Astrid’s song sounds disappointing tbh and I’d nearly bump Laura up into my second spot.

But by a country mile Tom has this

I’d go with Tom or Astrid, with a slight preference for Tom because he has a Tom Dice-vibe going on. Astrid reminds me of Ireland’s Molly Sterling!

They’re all great!!!! However once again I just think Laura has it all, the song is so catchy- and memerable.

After hearing the 30 second snippets I have a new top 5
1. Laura
2. Adil
3. Tom
4. Astrid
5. Amaryllis
So the only thing that happened was that Tom and Astrid switched places.
So far only Laura could beat Albania in my top 2, but I think I will like Toms and Adils songs will grow when I have heard the full verisions.

Amaryllis unfortunately sounds like a low budget Florence Welch. Tom has a very Gotye vibe going on. Right now, I think this is my favorite. Astrid also reminds me of something I’ve heard before, but the lyrics so far feel pretty weak. Not that Eurovision has ever been about lyrics. I can’t see VRT putting together a good act for this, though. Laura could definitely bring a party, if she sings better than she did last week. I like the energy she brings to the stage but if her voice goes all Maria Olafsdottir out there, it’s no good. Adil… Read more »

@PP: the lalalas were just a known gimmick for a song to make up for an “unpopular” language, at a time when countries could only sing in their national language. This boat has sailed.

Catchy doesn’t mean repetitive, neither does it successful. Look at Trijntje last year: her “waï-aï-aï” only made me want to bang my head against the wall, and she didn’t even clear the SF.

Laura’s song was written by Selah Sue but Selah wrote it originally for herself. Really can’t imagine Selah singing this. I don’t like it at all

I think Tom’s song is the only one that could qualify out of these.

Tom and Astrid are definently the best. But none of them are as good as Loice from last year

I think it’s going to be Tom or Astrid…though I think Tom would definitely do very well in Stockholm!

Belgium you tease! Not enough to tell a stand out but if Laura sings with as much enthusiasm again, it could be a banger

I think Astrid is the best of them.

I think it will be Tom for Belgium. It gives me the same feeling that “Take Me To Church” gave me the first time I heard it, together with Dotan’s “Home”. Then it’s Astrid that I really liked. I really hope that these two will go to ESC 2016!! 🙂

Tom all the way!

I was expecting worse since this is VRT but none don’t give me ‘Rhythm Inside’ Vibes.
My Top before listening to the full songs:
1: Astrid – I actually think that so far this is probably the most likely to get Belgium to the final
2: Tom – Its so similar to so many songs so I don’t think that would do well
3: Laura – I dunno – I haven’t warmed to it
4: Adil – It’s promising but I feel this will be disappointing
5: Amaryllis – Shes the only one that I dislike.

I can totally picture Amaryllis during her song writing session: “Songs in Eurovision need to be catchy, so I’ll just repeat the same phrase 56 times in my chorus. That’ll be catchy!”. It’s not catchy, it’s just annoying.

For me it’s either Tom, Adil and Astrid.

Need to see the staging first.

After the snippet best is Tom, than Astrid… shame that Adil don t have good song like Tom.

None of these clips sound promising. Rhythm Inside was one of last years best entries but I don’t see any of these having the same impact. Hopefully when we hear the full songs that will change.

Amaryllis’ song (at least the part we can hear) is the perfect example about how a good voice can be wasted because of a bad song. For now, Tom and Astrid have the best songs. Not a Eurovision winner here I think…

I prefere to wait and hear first the full songs… Like at MESC, snippets can dissapoint me when the full versions will be avalaible but from what I could hear: Amaryllis: Chorus too much repetitive… Laura: Reminds me a song from S Club 7 and could annoy me… Tom: Seems nice but not memorable, there’s some Gotye around the song that maybe could love it… Adil: This is a “Meh” from me, just ok from this, nothing special, nothing unique… Astrid: Hope this song can explode vocally, seems that builds through something and maybe could have that “special” thing that… Read more »

Tom is the best choice!

Astrid or Tom. Rest is quite disappointing…

Astrid or Tom to Stockholm. I can’t stand the other three.

Laura is doing her best Selah Sue impression, it seems… why doesn’t Selah just sing it herself?

Amaryllis’ song has the best arrangement, but the chorus is already repetitive after one listen, which is maybe the point considering it’s about kicking a habit.