On January 4 Germany’s NDR revealed some preliminary details about Unser Lied für Stockholm, its national selection for Eurovision 2016. And this morning they’ve given us what we all wanted: the names of the 10 finalists and their songs! The lucky ten performers are: Avantasia, Alex Diehl, Ella Endlich, Gregorian, Jamie-Lee Kriewitz, Joco, Keøma, Laura Pinski, Luxuslärm and Woods of Birnam. You may recognise Gregorian from our earlier list of potential candidates.

Germany has been less than lucky in the past few years when it comes to Eurovision, and already this year NDR has endured plenty of drama (what with the selection of an alleged homophobe who was subsequently withdrawn as its candidate). We’re hoping that it’s smooth sailing for NDR during their selection process and we think these ten acts could absolutely nail their performances in Stockholm.

Unser Lied für Stockholm takes place on February 25 at 20:15 CET. It will be streamed online and broadcast on the German network Das Erste. No jury — just televote!

LAURA PINSKI – UNDER THE SUN WE ARE ONE

WOODS OF BIRNAM – LIFT ME UP (FROM THE UNDERGROUND)

Are you happy with the choices for Germany? Let us know in the comments section below! 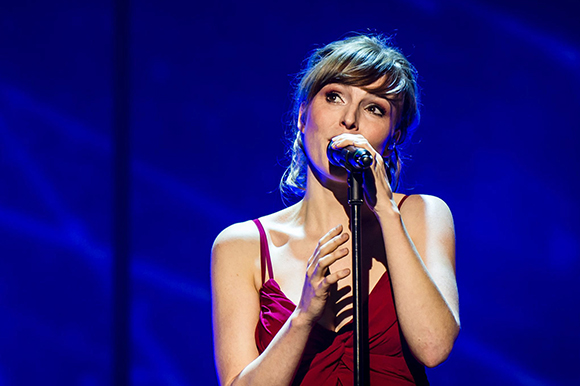 Arrrg….The Gregorian song is blocked here in Iceland on copyright grounds… 🙁 Anybody have another link?

Alex Diehl for me, but I see why Jamie-Lee is favorite

I hope Jamie-Lee will win! <3 Her vocals are flawless, the song is amazing and with the right staging, it could do really well :3

Joco have released a trailer for their song: https://www.youtube.com/watch?v=0Bp46MTbIm4

I have now hears Masters of chant, but Mystery of a blood red rose is still the best.

Moco there is another link this is the link: https://www.youtube.com/watch?v=1612ZAqBmOY

Honestly Germany seems to have a pretty good lineup of these songs so far.
I enjoy Gregorian’s song, but I feel like it might wear thin on some people after a few listens. Same with Avantasia’s song, it’s fun and has Meatloaf vibe, but I don’t know how far that will take them.

it’s called ‘blocked in my country’

Moco just go on YouTube and search for the song.

Go Jamie! I love Ghost so much!

Jamie-Lee is kinda half Maria Olafsdottir, half Aminata – a very good combo, as long as her stage vocals are more like the latter’s 😉

None of them are bad though – but how well would the gregorian chanting work with only 5?

WOW ! I dont know why but The ghostsong makes me want to dance and dance I like it a lot!

WOW! i dont know why but The ghost song makes me want to dance and dance i like it a lot!

Jamie lee Kravitz so far but will do well to get anywhere near the left side of the scoreboard. Pretty poor standard so far.

For me, it’s all reduced to one. Not two, not three, just one:
AVANTASIA <3

It's one of my favorite bands, and the song is catchy. Besides, Tobias Sammet is an outstanding performer.

I reckon Gregorian could have the same effect as the Russian Grannies did in 2012, the only difference is this is actually a good song.

Gregorian – Masters of chant is truly awesome !
I would be so happy to see them on Eurovision stage.

oooops
Also blocked in my country.

oooops
Alslo blocked in my country.

Gregorians music video is blocked in my country (Sweden).
But out of these songs, Avantasias song is the best IMO and has a big chance to get my vote in ESC if it wins ULFS.

Wait, these are the entering songs already?
Awesome! I’ve been listening to Jamie-Lee’s “Ghost” all month, please send her!

So, Avantasia’s song is actually a soundtrack from another thing. Hah. It sounds so, but those lyrics may have to be a little bit easier, they don’t follow the melody much. Wait…what? Hahaha… OK. Next. That Gregorian thingy is a thing in Germany apparently. And they are (or similar to them) in every NF throughout the years. Sorry for not buying your Da Vinci Deamons thing.

Jamie-Lee Kriewitz would be my fave from this bunch. Great sound, modern, very applicable and very not ESC related BUT finally some good music vibes.

Jamie-Lee HAS TO win!

That song by Jamie-Lee is pretty good, the video is hilarious though with the band playing a song which clearly consists of digital instruments only.

The best are Gregoria ft Amelia Brightman (younger sister of Sarah Brightman). With that song Germany wili be in TOP 10 , maybe in TOP 5.

So he got booted for being a homophobe? Even Conchita couldn’t make him Rise…

Poor dude. Maybe next year if he’s still interested in pulling off a “acceptance” campaign. Måns also expressed homophobic sentiment but changed it around Melfest 2015. Maybe Xavier could wing it too.

From those 5 you’ve posted videos of, Germany seem to have went for a very wide range of styles. The video qualities for Axel Diehl and Keoma aren’t good enough to fairly judge them compared to the others. Avantasia is very Meatloaf-esque, so it is a bit dated, but would be remembered against 25 other songs if sent to Stockholm. Gregorian is a very bizarre choice. I love their stuff, and really like this song, but it’s impossible to judge how well it would do, as it’s so unique. Jamie-Lee is the most comtemporary of the ones I’ve heard so… Read more »

Wow, Germany has really surprised us again with their rather unique songs! I would love for Jamie-Lee to win ULFS, “Ghost” has got so much potential and could possibly end up in the Top 5 if Germany sends her to Stockholm.

I’m so happy that Jamie-Lee is taking part. I really hope she wins our NF! 😀
Ghost would be my favorite German entry of all time ^^