We are getting close to Belarus’ national selection for Eurovision 2016, which takes place on January 22. In recent weeks the Wiwi Jury — our in-house panel of musical unprofessionals — has been listening and reviewing all of the songs. Valeriya Sadovskaya with “Not Alone” is the next one to undergo scrutiny. Did she convince us to stay by her side? Read and find out!

Mikhail: I was listenting to this song, slowly falling asleep, thinking “What a nice lullaby…” and then that weird ethnic or whatever it is hajajanana part comes out of nowhere and my sleep is ruined! Are they doing an act of sacrifice? Is it a secret plan to put everyone to sleep, tie up and then kill us with strange dancing? I did not sign up for this!

Denise: Hajajaananana? Really? It was pretty ok until that part came. Something like lalalala can fit into a song (Ivi Adamou) but this is the wrong song for it. It just tumbles along.

William: A promising start is killed off by the disjointed verses and horrific harmonies that follow. The “Waka Waka” inspired bridge comes out of nowhere, like a lion slaughtering a gazelle in the bush. Belarus to Africa doesn’t work, but Valeriya has a degree of vocal talent her competition lacks. That’s worth something.

Robyn: There’s something really strange going on with this song. It seems to throw together a whole lot of disjointed parts – the Lana Del Rey intro, the electro Céline Dion chorus, and then some random African-style chanting. Valeriya has a really good voice, but the song is a mess.

Sami: Mixing different genres in one song is usually difficult thing to do and they really didn’t succeed this time either. I really like the flute, but there should be a lot more of it. There still is some work to do with her vocals as well.

Edd: The song isn’t bad, but they need to take their tribal theme and run with it. The middle-eight is great and I hear some flute trying to come out in the second verse, but it sounds out of place with the modern production in the chorus. She is, however, the singer with the biggest potential – beautiful face, beautiful voice and good English(!).

Luis: The start is not bad, but it quickly turns boring. In the end, it’s a middle of the road song, which is determined to finish in the middle of the table (in the NF, ofc)

Cristian: Boring as hell, cheesy lyrics, a nice package with a bad gift. This is clearly an unsuccessful attempt to copy “Wrecking Ball” by Miley Cyrus but at the same time a good way to conquer the heart of the average Eurofans.

Antranig: Valeriya has a great voice and the verses are really good but this song is begging to break out into a dance number that never comes. The bridge is fun and the song never gets boring but if it were to win, I’d want Belarus to majorly revamp this before it takes to the stage in Stockholm.

Bernardo: First, get rid of the backing vocalists. They destroy any change of this to work. Thinking about the song, without the annoying backing singers, I can dig it. This could really work well with a decent staging. It could turn out to be a powerful and emotional performance. The song itself isn’t that good, but if Valeria nails the vocals on the big night, it could make an impression.

Anthony: One of this year’s returnees, Valeria returns with a strongly executed power ballad and it’s a major improvement from last year’s rock ballad combo. After a ballad overdose in Vienna, my concern is whether Europe and Australia would be in the mood for another ballad in Stockholm.

William C.: When I listened to this first, it reminded me of a mix between “Undo” and “Amanecer”, however Valeriya later differentiated herself from the two. Her powerful voice filled the room, and the “na-na-na” with a mixture of a drum beat I think fitted the song perfectly, albeit unusual. Those backing singers need to go though, they sound like a cat screeching and are dragging Valeriya down. 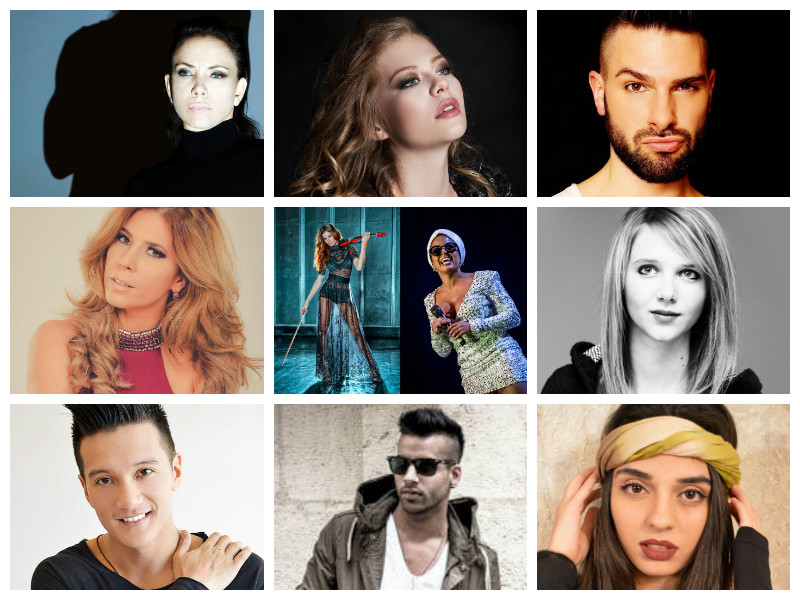 Wiwi Jury: Malta’s Deborah C with “All Around The World”

ITS HORRIBLE!!
Bye Felicia ,this song shouldnt have ever seen day light ew
3.0

I like it. With more backing vocals it could actually work.