The Wiwi Jury – our in-house panel of music unprofessionals – is continuing its journey around Lithuania ahead of the first Eurovizija quarterfinal on Saturday. Somewhat ironically, Istvan Kvik & Ellada left us on the verge of tears with “Please Don’t Cry”. Can Catrinah cheer us up with “Be Free”? Read on to find out…

Reviews: Catrinah with “Be Free”

Angus: Sidestepping the fact Catrinah is wearing a bean bag, “Be Free” is pulastaing with promise. Paired with her voice it’s a seriously decent effort. Styling is overshadowing a lot of the potential here but that can all be toned down, even if Lithuania isn’t exactly famed for taking the subtle approach at Eurovision.

Luis: Is it wrong if I say that the aspect which I like the most about this song is the backing singers? Because the song itself is not at all appealing. Throughout the three minutes, Catrinah doesn’t give me any reason to stay until the end, probably because she gives so much with the first “Be Free” that you know she isn’t going any further. She tries to insert some Aminata-Florence Welch realness towards the finish, but I’m not buying it. And well, what can I say about her trash bag that the rest of the jury hasn’t already mentioned?

Anthony: Catrinah has left me with a bag of mixed emotions. While the mesmerizing chorus drew me in, aided by her backing singers building up the tension, the verses in between are lacking. Overall “Be Free” is a decent song, but it could do with a slight revamp. Also, if I was Catrinah, I’d seriously consider losing that outfit, unless she want to win this year’s Barbara Dex Award.

Mikhail: Be freeeeeeee! I want to be free — free from you! Stop haunting me! It’s not emotional. It’s like being tossed in the sea. Your head goes round and round, and it feels like you’re being crushed under a giant press.

Robyn: “Be Free” sounds strongly influenced by “Love Injected”, an emotional love song with electronic beats. But — maybe because this is from Lithuania, not Latvia — the song and the performance don’t have Aminata’s creative restraint, and have thrown in all the excessive embellishments imaginable. I would love to see Catrinah try this at least without the scene-stealing bin bag dress. 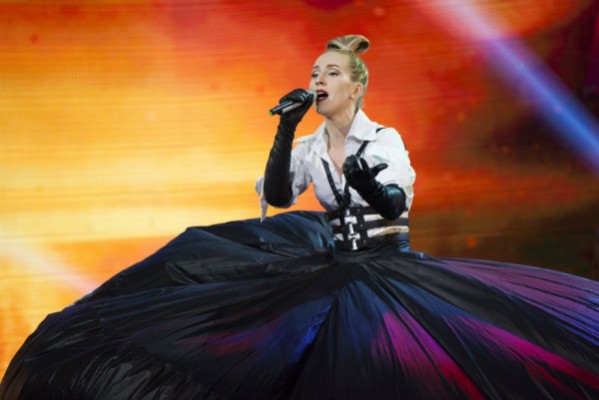 Steinunn: I listened to the song probably ten times to try and form an opinion on it. All I can say is that this is so far from being emotional (like she keeps repeating over and over again) that I feel like….nothing. The only opinion I have is about the dress. She forgot to take it out of it’s dry-cleaning bag.

Liam: I am the biggest fan of “Love Injected” and Aminata that you will ever meet. While Catrinah’s song draws influence from “Love Injected”, it falls slightly short of the majesty of Latvia’s 2015 entry. “Be Free” is good, but not good enough.

Antranig: Between her hair and her giant trash bag, I have already fallen in love with Catrinah. The song itself is above average and Catrinah sells it with some powerful vocals but it isn’t amazing. I would like Lithuania to send her just so the Eurovision wind machine can have some fun with the dress. She could have a “battle of the trash bag dresses” with Switzerland’s Rykka. Bernardo: We have a big problem. When I first watched the performance, I was scandalized by the dress. Again I was finally able to concentrate, the song had ended — that’s not good. Catrinah needs to perfect the vocals. She’s a bit out of tune, but the backing vocalists do a brilliant job supporting her. “Be Free” itself is quite acceptable and with a revamp could do well at Eurovision.

Padraig: Let’s ignore the atrocious staging for a moment. Without distractions you can appreciate “Be Free” for what it is — an very competent entry in an extremely weak field. It has a new age sensibility, but with some mainstream appeal. The studio version is particularly strong. Unfortunately, live Catrinah relies too much on her backing vocalists. But that dress is her greatest crime. One simply does not wear such attire unless one is a novelty act. And Catrinah is most definitely not a novelty!

To reduce potential bias, we drop the highest and lowest scores prior to calculating the average. We removed a low of 2 and a high of 7.5. Poland confirms a national selection for Eurovision 2016, but who will compete? Poll: Who should qualify from heat two of Hungary’s A Dal 2016?

I wonder if Missy Elliott has ever watched a Eurovision contest. I don’t think she has any idea what she started in Europe with her Supa Dupa Fly outfit in 1997:

Girl why are you backing vocalists stronger than you? Why does that dress have a wind machine rippling it? Why is the song even there? Is this secretly Aminata’s long lost, less talented Lithuanian cousin? The song has so many questions, but, like that trash bag, it’s hella empty. I wanna take out the trash, and not in a Cheeky Nandos way, in a landfill site way…it’s not great.

This is by far my favourite song in the NF. It really brings the emotion

The first thought that i had when i saw the dress was “OMG SHE’S LITERALLY TRASH U GO GURL”. But I can’t stop listening to the song! 10/10 c;

omg Antranig’s comment made me laugh so bad! I can’t breathe! “The battle of the thrash bag dresses” Anyway. Y’all are quite wrong about the dress. 🙂 The dress is going to be changed into a warrior – like stone figure costume where in the middle of the performance Catrinah is going to “BREAK FREE” and be left with an easy white dress. 😛 That’s quite emotional i would say. This saturday is hopefully going to be Catrinah’s night. She and Petunija are my current favorites. Maybe because i like electronic music a lot? http://www.delfi.lt/veidai/eurovizija/atlikejos-catrinah-ivaizdis-vienus-pasiurpino-kitus-priverte-aikteleti.d?id=70228708