Ukrainian broadcasters NTU and STB recently announced the 18 artists taking part in their national selection for Eurovision 2016. One name stands out among the participants: The HARDKISS. They have an enormous fanbase in Ukraine, Russia and beyond. You’ve never heard of them? Well, let us introduce you!

The HARDKISS have become known for their original sound and unique style. They say that their music is “progressive pop”, and it delivers modern and avant garde sounds. The HARDKISS know how to make a spectacular show. Just look at their performance during the MUZ-TV Award ceremony.

The band was formed in 2011 by lead singer Yulia Sanina and guitarist Valeiy Bebko. As soon as they released their first music video, “Dance With Me”, the band started getting attention.

Soon the video went global and was broadcast all around the world. The HARDKISS were mentioned in international media such as The New York Times, and they were nominated for multiple awards, like the MTV EMAs and the YUNAs, where they won the Best New Act and the Best Music Video categories.

And The HARDKISS have support from a Junior Eurovision star. In November, when our team was delivering all the fresh Junior Eurovision news from Bulgaria, wiwiblogger William spoke to Ukraine’s 2015 representative Anna Trincher.

When William asked which artist Anna would like to see represent Ukraine at Eurovision, she had a definite answer — The HARDKISS. Anna told us they would be an incredible choice for Ukraine and that she will cross her fingers for them. Her wish has come almost true!

What do you think? Do you want The HARDKISS to represent Ukraine? Let us know in the comments below! 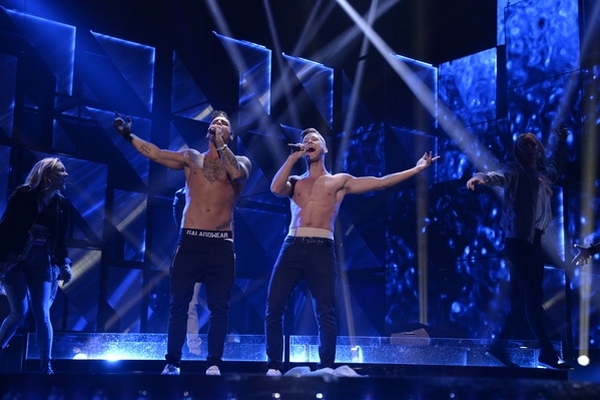 They are amazing! Just listen their song Stones and they will become yours favorites…

they sound a little too “progressive” for my liking but we’ll see.

A song like this with a good staging could make a huge impact in the audience. Ukraine has a Top 5 or even a winner in their hands. We’ll have to wait to hear “Helpless” and the other Ukranian songs, but for now they’re my hot fav to win the NF. For sure, they would bring an awesome show to Stockholm.

I listened to their song Tony Talk back in december and I had no idea they are from Ukraine.

Do you know that experts from esctips are communist liars? They wrote that “That’s Why I Love You” is much better for ESC than “Chameleon” and then they charged it and they banned me. This is one great mafia. They mislead people for their own profit.

Yes! An act like this would do well in Eurovision. Gimmicky for all the right reasons too! (although i use the word ‘gimmick’ lightly)