The Wiwi Jury – our in-house panel of music unprofessionals – is continuing its journey around Lithuania ahead of the fifth Eurovizija show on Saturday. Previously, we checked out Ruslanas Kirilkinas and “In My World”. Does this world he sings of include “Stars In A Rainbow” and Berta Timiniskaite? Read on to find out…

Berta Timinskaite “Stars in a Rainbow”

Reviews: Berta Timinskaite with “Stars in a Rainbow”

Steinunn: “Stars In A Rainbow” confuses me. I like the song and I like the singer, but the lyrics really put me off. They’re really weird. “Make stars in a rainbow”, what does that even mean? But I enjoy the beat enough to be able to ignore them, plus Berta is pretty fierce. So I’ve decided I’m going to like this.

Luis: Another case of a singer that’s much better than the song they’ve paired her with. “Stars In A Rainbow” sounds as if it was done with a trial version of a music editor. The ’90s sound is dull, and it doesn’t do Berta any favours. With a decent song she could shine, but with this she’s lost.

Robyn: We have some proper diva action here. Berta is great singer with a mighty voice. “Stars in a Rainbow” isn’t quite the right song for her, but she does her best with it, adding lots of flavour to the precision of the house beats. But as it is, “Stars in a Rainbow” makes Berta sounds more like a guest vocalist than a star in her own right. 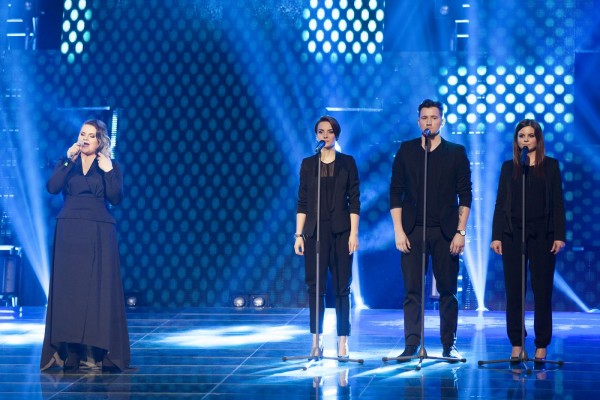 Anthony: Berta makes her return after a two year absence. She still performs with swagger, but “Stars in a Rainbow” doesn’t quite bring out the best in her, compared to her 2013 attempt “Missing you, Missing Me”. The ’90s house vibes make for pleasant listening.

Antranig: I want to learn Lithuanian just to understand why there’s a fully naked painter in her postcard. Berta has a great voice and the song is edgy but not quite polished. The beat is infectious and the attitude Berta brings to the performance sets this apart from a lot of the Lithuanian entries this year. “Stars In A Rainbow” has an outside chance of mounting a challenge.

Mikhail: It’s as if she just threw some random lyrics on a random beat. I can do that too! It sounds so bad. The arrangements are non-existent. If a DJ played this in the club, I would personally pelt him with tomatoes.

Bernardo: Berta has amazing vocal control and delivers a perfect performance of a so so tune. The song’s production feels unfinished. Maybe with a revamp this could work, but for now this just feels empty. Angus: Berta’s voice teamed with the Martin Solveig vibe beats makes a hugely compelling package. The lyrics are inherently ridiculous, but Berta’s character wins you over to her side and her voice convinces me this is in with more than an outside chance of doing well.

Liam: Many may look at this and think that a song like this wouldn’t do well at Eurovision, and that the vocalist is its only redeeming quality. Can I give you a list? Bojana Stamenov, Sebalter and many more have all single handedly carried underwhelming songs to success. Now it’s Berta’s turn. I’d watch out for this one.

Padraig: This a ’90s throwback that no one asked for. The lyrics are nonsensical, complete with contradictory metaphors for love. Berta can’t compete with the overpowering beat, and fails to take ownership of the song. She can posture all she likes, but there’s no hiding from the fact that, whatever about stars, there’s no gold at the end of this rainbow.

To reduce potential bias, we drop the highest and lowest scores prior to calculating the average. We removed a low of 2 and a high of 8.5. This music is so frickin good I could listen to it on repeat all day. I want her to win but I also want Catrinah to win such a dilemma :C Who though Lithuania would provide 2 great choices for me