Update at 16:30 GMT on February 16, 2016: SVT has released a statement and Molly Sanden will not be disqualified. All 7 songs from Semi-Final 4 are now available online to neutralise any advantage caused by the leak.

Ever since the 28 artists competing in Melodifestivalen 2016 were announced, Molly Sandén has been the bookies’ favourite to win and represent Sweden at Eurovision 2016. Today, however, Molly’s road to a Melodifestivalen victory experienced an unpleasant twist when a 30-second-clip of the her song “Youniverse” was leaked through Amazon. The Melodifestivalen rules are strict and say that no part of the competing songs may be publicly available before the first rehearsals clips, which SVT publishes during the week of the semifinal. It is still unclear what caused the leak.

This is not the first time that a competing song has been leaked early. Back in 2010, SVT accidentally published two of the competing songs beforehand. The Swedish broadcaster took the blame and the songs were allowed to compete. You can read more about Melodifestivalen disqualifications here.

It is still unclear how SVT will react to the leak. Earlier this month Anna Book got disqualified from Melodifestivalen, when her song “Himmel för två” was already sent to Moldova’s selection back in 2014.

The 30-second preview clip on the Amazon listings has now been removed. 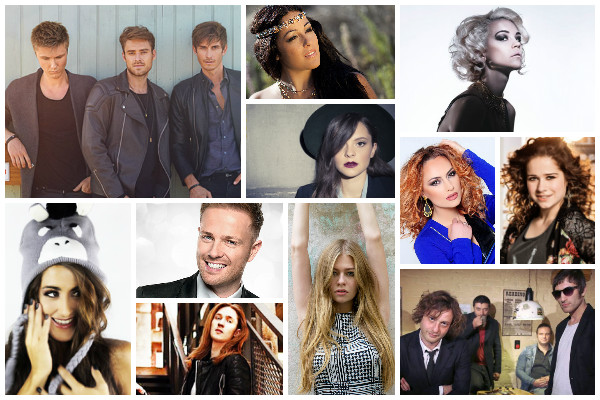 Its just a 30 sec snippet, its so cool that people already know that the song sucks or that she doesn’t have a chanche to win melfest, snippets can be so misleading.
Just like Isa, her snippet was AMAZING, but the full lenght song wasn’t as good as it, and Molly PH’s snippet was kinda bad, but the whole song and show was amazing!

Judging a song based on half a dozen words without even listening to it in its full complete version … does that make any sense? Shallow and futile! It’s like seeing all the designers of Project Runway shading one another for TV ratings… and still nobody knows anybody at all. And this Eurovision: since when do words even matter to what is “no longer a song contest”? So many contradictions … and so much desire to prevent the pre-favourite from actually NOT winning in Sweden.

Why after this, many wili be talk, write about Molly and her entry for MF 2016, in Sweden, Europe after her song leaked. This is huge for her and her authors and maybe also for SVT .

If it’s a genuine mistake as to the song being released then SVT are usually understanding, in 2012 Euphoria was used in a Spanish advert, after the first semi-final, when there was a censor on the song, because it had not been given out by Loreens team and was acquired a different way, SVT were understanding and didn’t do anything about it… There’s a clear difference between this and Anna Book.

I haven’t heard it, but it will have to be bloody good to forgive those awful lyrics. Jeez.

I find it offensive against my country that these conspiracy theories florish as soon as something like this happends. And that Christer Björkman has something to do with it. Come on! Or do you wish it perhaps? Well, I can say that he loves his job too much and he would not risk it. And I think he knows a lot better not mess with the rules to get the result he wants. No, we haven’t found a song that would stirr things up in ESC. The songs are not bad. Wiktoria is not THAT good. I prefer Robin Bengtsson.… Read more »

But has SVT discovered it, if you know what I mean…

It was still after 1 of September, so don’t disqualify Molly!

I find this so bad, that I would be relieved if it was disqualified. I like ace wilder ( a lot), but I have to agree with william- wiktoria seems to be the one to beat so far.

Y’all look like conspiracy theorists painting up Christer Björkman and SVT as antagonists. Melodifestivalen is the most organised and the least corrupt pre-selection today, and still you try constantly try to blow things up as “controversies”. Snippets (not full songs) being leaked during the Melfest weeks has happened plenty of times before (not only in 2010, in which it happened to a large extent) without dramatic reactions from the Swedish Television. The Anna Book situation is completely different, with the full song being public long before the actual competition and as previously said, breaking the rules of Eurovision. There is… Read more »

No. Let’s hand al this to Robin Bengsson please? I am pretty tired of the pop tarts and their dramas. Not to mention the over the top stagings for mediocre songs. It has really gone quite overboard this year.

It’s funny that so far this is shaping up to be a heavily female year even though it was the men who triumphed last year.

idk. none of the songs so far really speak to me. i hope arash’s afro-pop song kizungazunga is good because i have high hopes!

rules are clear and should be equal to EVERYONE, bye bye molly!
I was eager to hear you but rules gotta be respected and you clearly f*cked up

I listen the snippet of song, better then her first 2 song at MF, but I don t see this have great chance to win at MF. We have better song at MF, Wiktora, Isa, Robin even Ace Wilder.
I think SVT don t disqualifed Molly, and this situation will bring her much support from televote,and better result in semifinal and final.

We had same situation with Jedward in 2011, and RTE didn t disqualified but RTE change voting system not 50 % juries, 50 % televote, they change after that 67 % juries and only 33 % votes from televote.

Sounds great but those lyrics are more cringeworthy than the pun in the name!

Hmmm.. I doubt they’ll disqualify her, she’s the favorite to win and Christer Björkman knows that very well, they’ve probably spent a fortune on her performance. Besides, he bent the rules last year for Hasse Andersson and his already published japanese pop song.
I don’t want her to be disqualified, I was really looking forward to hearing her song and seeing her performance, but if SVT wants to be taken seriously they need to enforce their own rules.

Wiktoria should win, no one else matters tbh.

Ace is BS this year

“The Melodifestivalen rules are strict and say that no part of the competing songs may be publicly available before the first rehearsals clips, which SVT publishes during the week of the semifinal.”

The rules will be ignored and both her and the song will compete as she is the fave to win to represent Sweden!

Doesn’t sound like anything special from the snippet, and is definitely a step down from her singles.

Sounds like many other songs this season, nothing special. Let’s hope the full song is more appealing.

First of all I hope that she won´t dsq!!

Sounding pretty good.
Considering the lack of quality so far during this year’s Melfest, that is a relief!

Do they really want to diqualify a potential winner?
Or someone’s afraid that she can easily beat Ace in the final, so that’s why he need to leak the song?

Oh, this is a truly winning song and so much better than ‘Heroes’.

SVT is the control freak of the national broadcasters…. preventing people from watching the finalists’ videos online before Andra Chansen and now they’re probably having an existential crisis. Why should this be a big deal?

This isn’t really a leak. Her team likely put the song on Amazon for preordering but didn’t realize that listeners can sample the song. I doubt Christer is going to let his favorite get disqualified, but you never know, it should be interesting. It’s a shame though, this song is really good and would easily win Melodifestivalen.

Its all going down in Sweden.

I don’t think she’ll be disqualified because that would just be cruel.

So basically the MF winner will get disqualified or what? :O It probably isnt even her fault. Wow. Damn it!

Oh it was not as good as I hoped.. let’s hope she doesn’t get disqualified though 🙁

If Molly were to be disqualified because of this leak, I think I may cry!

I love the snippet of the song, and I can’t wait to hear ‘Youniverse’ in full.

I can see why she’s the favorite to win Melfest. It’s really good.

I hope she doesn’t get DQ’d for it!

Molly Sandén can say “thanks” to SME Sweden.

Ummmmm…. I can listen to it in the UK.