This week the Wiwi Jury — our in-house panel of music unprofessionals — headed north for Melodi Grand Prix 2016, Norway’s selection for Eurovision. After getting down on some delicious reindeer steak, we gathered round the fire to listen to Elouiz‘s song “History”. Do we think that she can make Eurovision history? Read on to find out…

Edd: The first two minutes are delightful. Enjoyable melodies, interesting production and a great voice – just as a pop ballad should be. But they could do so much more with the final chorus – it builds so beautifully to an underwhelming climax. It’s enjoyable whilst you’re listening, but it lacks a memorable moment that screams “vote for me!”

William: There’s a split second in the chorus where she sounds very Taylor Swift. But that’s not enough to elevate this bland, forgettable number. For a singer who spells Elouise with a Z, the song is incredibly tame. The production is lazy. I suggest she recasts this as an EDM number because the pop ballad just isn’t working. Chris: Gosh, those lyrics really are trying to drive the message home aren’t they? I suppose it’s better than Stine’s song in the “attempt at something Disney would do” stakes, but that’s not exactly saying much. It gets going and then stays exactly where it was. It’s a shame, but looking at Elouiz’s back catalogue, there’s nothing much different. It’s what she does, but it’s not what she should do if she wants to go to Eurovision.

Deban: Packed with hope, promise and inspiration, “History” may be ambitious in its quest, but it’s cleverly disguised with a stripped production, allowing Elouiz’s dulcet tones to take flight. As a Disney-inspired song, it is refreshing to feel the confidence and  hear the positivity in the lyrics. Life isn’t always all about boy meets girl. Robyn: This sounds like the footnote in the discography of a pop star, the sensible, uplifting ballad in her teen years, before her sexy wildchild phase kicked in and all hell broke loose. It’s so safe, so boring and so instantly forgettable – all the things the song lyrics are promising will not happen.

Josh: Remember when ballads were really popular back in 2002 and they sounded exactly like this, except it was Hilary Duff or Mandy Moore singing it? “History” is atrociously dated and dull. I’ve heard some of Elouiz’s songs before and they’re usually way more modern and current than this rubbish. Destined for the bottom of the scoreboard, I think. Sorry!

Mikhail: The beginning of this song is a slower version of “Santa Claus is coming to town” then it mixes up with Coca Cola Christmas theme adding some classy “special effects” of American songs. Basically, the song has nothing special in it. Everything is borrowed from many other songs. It’s just too generic, but at least enjoyable.

Luis: This song sounds like it was a misplaced entry from 2006, given a place in the 2016 final as a way of saying sorry. It’s bland, inoffensive and, above all, dated. I won’t deny it’s easy to listen to, but it’s exactly as easy to forget.

Renske: That soundtrack for a Valentine’s Day movie didn’t work out? Let’s send it to MGP. This song is quite an intoxicating one, but the lyrics are lovely though. “History” could be a dangerous and surprising song in MGP, just like “Thunderstruck” last year. People have emotions and are not afraid to show them.

Bernardo: I’m still waiting for this to explode into an amazing chorus. Unfortunately, it never does. Elouiz has an amazing voice and the song itself is great, but I’m afraid it will be forgotten. It fits my personal taste one hundred percent, but I guess I’m not voting in Norway.

The highest and lowest scores are dropped prior to calculating the average score. This is to remove outliers and reduce potential bias. We have removed a low of 2.5 and a high of 8. 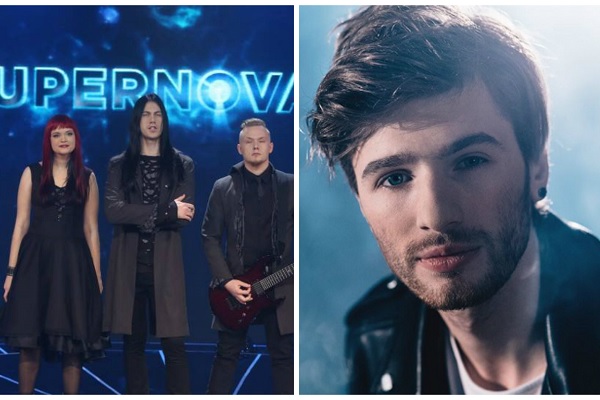 Supernova 2016: Justs and Catalepsia among confirmed finalists in Latvia