Our hopes were answered when we found out that Croatia would send Nina Kraljic to Eurovision 2016. Now, Nina has released her Eurovision song “Lighthouse” and we are officially living for it. The song was officially debuted on Croatian radio, with the video set to be released very soon.

Check out the “Lighthouse” lyrics here

Featuring an absolutely killer key change, “Lighthouse” really shows off Nina’s voice. It also feels very much like an authentic song for Nina to release, with folk instruments leading in to a heavier beat as the song goes on. The song was written by the Austrian duo Popmaché, made up of Andreas Grass and Nikola Paryl.

By singing in English, Nina will become the first Croatian artist to do so since Daria Kinzer’s performance of “Celebrate” in 2011. It’s a rare step away from their native tongue for Croatia too, as they’ve only performed in English (or part-English) twice in the past decade. After failing to qualify for the final in their last four attempts, will “Lighthouse” be the song to push them there?

We react to Nina’s song:

When she was announced as the Croatian representative, Nina seemed to be positive about her chances:

“In the past year wonderful things have happened, from winning the show The Voice Croatia to three nominations in the Porin awards, and now I am going to Sweden to represent Croatia. From my participation I expect first of all a good performance, and I hope that the efforts will pay off. The most important part for me is to represent Croatia in the best light.”

What do you think of “Lighthouse”? Do you think that Nina will be able to bring Croatia back to their first final since 2010? Let us know in the comments section or through our Twitter and Facebook! 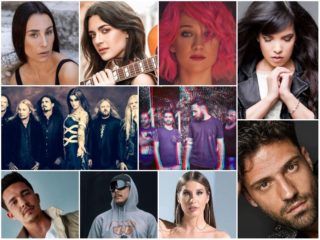 clear as a day, this is a winning song

The more I listen to the song “Lighthouse”, it’s safer to listen to the winning song of this year’s Eurovision Song Contest. I’ve heard all the other songs that will be on the competition and definitely outlet competition Nini and Croatia to win.
As I was already wrote in a commentary, close your eyes and enjoy, let the song take you to another world, the world of Nine queens, winners of this year’s Eurovision Song Contest.
Nina Kraljic – “Lighthouse” – Croatia ….. favorite No. 1 to win !!!!!!!!!!!!!!

I honestly wish this were in Croatian instead of English. Everything sounded so atmospheric and beautiful in that one song that Wiwibloggs linked in a previous article. Her English is fine, but she sounds on the cutesy side here and not mysterious like she did in the other song. Not quite in my top 10, though it’s a good effort.

It’s 2016 and we STILL have region blocking? For an international contest? Outrageous! It gets harder and harder every year being an American Eurovision/Scandipop fan.

This is now my winner. After listening to it just once it moved right to the top. <3 Well played Croatia!

Let's just hope she sings this well live and that the stage show gives it justice.

After hearing the entirety of Australia's entry I can safely say that they'll also be in the fight for victory.

Lol how can some people relate this to Uncover and Heart Shaped Hole? I didn’t hear any similarities. Her voice is like The Cranberries tho and i love it

Dunno why, but this is the only song that speaks “winner” to me. But I doubt that it will win. 🙁

Dunno why, but this is the only song that speaks “winner” to me. But I doubt that it will win. 🙁

ooh
got it on dailymotion
distinctly ellie goulding sounding, similar to heart shaped hole (which was amazing)

after poland gave up to win this year!! we got a potencial Winner! well done croatia!!!

@Brian You’re right! I felt like I already know the song the first time I listened to it
Still love it tho

@EugeneESCUK: Mind you, only a *bit* of it, and only in certain situations. I didn’t like the repetition in Margaret’s song, since it just made it sound a lot more shallow and vapid to me, but I can certainly appreciate the repetition in Nina’s song. Like I said before, there an emphatic quality that focuses on the singularity of the lighthouse -a symbol of hope in times of desperation -that gives the repetition a sense of purpose to /add/ to the overall story of the song. In that way, I find it quite effective. I mean, would I rather a… Read more »

Croatia sends a sweet version of The Cranberries and I love it!

Love the voice, like the melody, love the intrumentation, not sure about the key change, but it doesn’t hurt the song. Curious for the live version, but I guess semi 1 is becoming a really nice evening of music in the end!

Nice song, but also a bit dull and repetitive… all depends now on the staging and live performance. could be absolutely top, or a flop.

Good song and voice. Only downsight is the fact that it is not catchy. Pretty forgettable.

People in America: I had to go to dailymotion to listen to the song, there’s a video about 2:59 minutes long that has it, it’s pretty choppy but it’s fine and you can listen to the whole song 😀

I hope this makes the finals, it’s certainly better than a lot of other countries’ entries so far (that might make it just because they are said country…)

It’s like if Emmelie de Forest and Mariette had a lovechild that recorded a soundtrack for an epic fantasy-battle movie or video game. I really like that genre, so I like this song. Winner? Probably not, but if anything Croatia deserves to be in the finals and place on the left hand side.

Oh my God! Has noone noticed this is just such a plagarism of ZARA LARSSON’s Uncover???? Even the way she’s singing… I’m actually in shock people can be so cheeky and have the nerve to literally copy like this

Beautiful song, but doesn’t give me any winner vibes like previous winners did. This needs a good staging to reach top 10. Im quite sure this is not the winner but might reach the top 10 in the final and thats really good for a comeback country.

Thank you Croatia for sending this. It will be a crime if this doesn’t go through

It’s a decent effort, very atmospheric, ethereal and spiritual, but takes a while until it gets going somewhere. It sounds very much like what an Irish entry could sound like, especially with Nina channeling Dolores O’Riordan vocal magnificence. It will stand out among its peers.

I actually hope that croatia will win cause the song is great and most of the other songs are just “mehh”, with good performance and good love vocals she could win ! GO CROATIA !

It’s a nice song. But it sounds more irish. And there isn’t an instant hook anywhere that makes me remember it.

12 points from Österikke go to Kroatien!

Great song! Croatia rose to number 4 with the bookies!!

This is beautiful. Like, so so pretty. Croatia, I never thought I’d say it, but welcome to my Top 5, because this is incredible. This could do so well and is definitely a qualifier.

Love it! One of the best songs this year…

It’s good, not great. I was a bit bored at first but it grows and gets better by the end. It could be a song that will grow on me over time, but right now I think she would do well to qualify.

Not a chance. This girl has an angelic voice. Listen to these:

In Poland all songs were very weak and this song from Croatia looks better than all from Poland at this moment. But the problem will be, if she will look on stage like Rykka.

It’s unique but a bit bland at the same time.

Argh video is not available in your country! Wah!

I’ll find a way to listen to this, ESPECIALLY after listening to SM’s song.

Honestly I didn’t expect that much from Croatia, but this is pretty good. Getting some Emmelie de Forest vibes here as well.
This deserves the final (both the song and the country), but anything could happen since it’s in semi one and it’s Croatia…

Well, that’s what I call a comeback. Great job Croatia. Welcome in the finals Nina.

Sucks that American fans have to use a VPN to get to it. Do these guys just not WANT us to buy their music? Feh.

I’m liking it! Her song is amazing, right on Croatia!

Fikri :- The repetition is not so in your face and not so annoying here, it’s when it gets to over 20 it’s just very lazy, poor and lacking creativity. Apparently Marshpan likes a bit of that!!!!!! Each to their own!!

This song does NOT lack creativity though especially in the use of a variety of different instruments including a touch of sitar. I had to listen a few times to see if I could recognise all the sounds.

Finals are quite possible for this song. Personally, I’m not really a fan of this song but i could see it qualifying

For anyone who can vote in Semi-Final 1, please vote for Croatia. Nina really deserves to be in the Final this year.

She has a unique voice and a lovely accent. It’s very pleasant and it has all the clichés that ESC fans like and it was written to appeal to them, so they have succeeded on that front. It’s nothing that we have not heard before of course but there is nothing like it this year.

Croatia has not competed since 2013 so it is almost guaranteed to do okay, but is not a world beater for me. It will get the late release excitement and then settle down.

I like it! It’s enhancing, captivating, dark but beautiful. Her vocals go well with the folk sound. Granted, it probably won’t win, but it’s a major improvement over past entries