It seems so long ago now, but it was only back in December that Eneda Tarifa was the very first Eurovision 2016 singer to reveal her song. Now, “Përrallë” has undergone the traditional reworking that we see from Albania every year. With the revamp complete, it’s time to reveal the official Albanian entry for Eurovision 2016. Eneda Tarifa will fly the Albanian flag in Stockholm with the song “Fairytale”.

The song has been written by Olsa Toqi, with the revamp taking place at the Woodstock Studios in London. Eneda kept things close to home for the video though, which was filmed on location in Albania.

The official video clip showcases lovely Albanian nature and clocks. It sounds very similar to original Albanian version, but sounds less dramatic. Eneda Tarifa is fierce with all those different dresses, hand gestures. Just when she looks at you, she wants to enter your soul.

We also know a little bit more about Eneda’s promotional tour for the Eurovision Song Contest. She’s already confirmed to be at the Eurovision in Concert (and we’ll be there too, y’all). It’s also believed she will be in attendance at the Moscow Eurovision Party as well. This is a girl who knows to work the promo circuit!

Of course, it was with Përrallë that Eneda won Festivali i Këngës 54. Much as we see every year, there will no doubt be debate as to which version is better. Make sure to let us know whether you prefer the new version of “Fairytale” in the comments and via our Twitter page.

YOU CAN FOLLOW ALL OF OUR ALBANIA EUROVISION NEWS HERE. 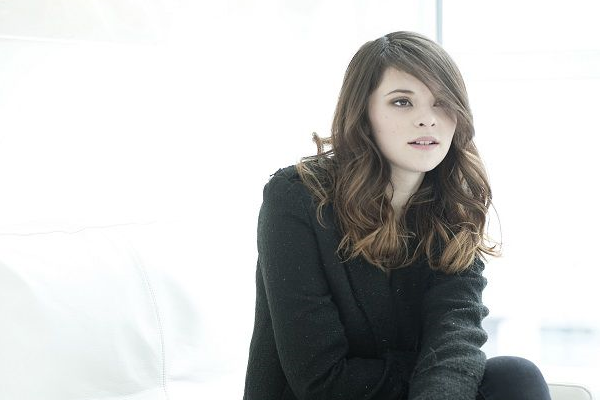 Italy: Francesca Michielin will sing in Italian — with one chorus in English Here’s the problem, I like Perralle for its dramatic and orchestral effect, which actually reflects the true “Fairytale”. This version sounds like Albania tries to go modern and EDM, but it ends nowhere and gets stuck. The tempo is also hanging, makes me confused whether I should get rock or get mellow with it. But still, it is a good material… with wrong revamp

I have to say I’m disappointed. I loved Peralle. It was my number 3 but this new version is so different. It was been watered down. The drama, the power, the craziness; they have been removed.
I hope it works out well for Albania. I hope this new version picks up more votes than it loses. For me, it will see Albania slide down my rankings.

I wasn’t a fan of the song in the first place but it was better in Albanian. No final for Albania this year then

Eurovision Song Contest is clearly dying. If world will have great song contest in future, this will be not this contest.

Ok, so here are my reviews of the songs that were unveiled during the weekend: Sweden: This was by far one of the weakest Melodifestivalens in recent years, evidenced by the fact that Frans won with 13% of the vote, with 11 other songs gathering between 6% and 9% and the juries being equally split. I am all for Frans’ simplicity and directness but he loses extra points for the obvious plagiarism. I think the EBU should start enforcing some rules and putting its house in order, but fat chance of doing that as far the swedes are concerned. So… Read more »

Interesting. This has a neat, funky feel that I wasn’t expecting based on what I heard from the original version. They’re taking a risk by veering away from the traditional ballad route, but I like the risk they’re taking. Nice job, Albania.

This Eurovision edition is the edition of meaningless lyrics…

Great song but these simple English lyrics are killing it. In Albanian this song would stand out in the contest…

i am an albanian and i also didn’t feel the power of the song that it had before in the albanian verson. The words don’t fit at all and it looks generic. The only thing left is her voice. If she sing good live maybe that will be a plus for her.
“Te duaaaaa” turned into “I loooove youuuuu” really???

It’s like Hersi’s song once again. The instruments felt uninspiring.

I agree with Robyn…it’s like they simply tried to fit English lyrics into a song that was written with Albanian in mind…also the tempo/power and timbre of the original has flatlined. Not a fan of this change, but it wasn’t in my top 20 anyway…Elaida Dani was one of my favs last year. Now this. Albania may struggle to reach the final.

Albanian entries are never bad. Neither is this but it’s just so boring and flat. tells me nothing.
But Albania always put on a good show and that might help them out

Albanian entries are never bad. Neither is this but it’s just boring and flat. Tells me nothing. But Albania always have good stage shows so that might give them a push

they made it even worse than it already was

I actually really like it. I wasn’t expecting it to be very good but I think this works and will appeal to a greater audience.

I don’t think that the language worsened the song, but the instrumental is much more weaker. I hope it’s not the last version, cause it’s a big loss.

Meant to say RnB of course

It actually got worse! :I

Oh great! Another revamp that destroys the original.

No final for sure, Albanian version was bad, but this is even worse!

Perralle was pure drama, Fairytale is just a huge letdown. It’s like they turned a fierce tiger into a mellow kitten. I thought the song was fine as it was, maybe tweak the instrumentation a little to sound less orchestral and add english lyrics if you absolutely have to, but this whole revamp was unnecesary.
Also I hate songs that have “I love you” in their lyrics, it just screams lazy songwriting and zero imagination. Where’s the poetry and the metaphors?

I don’t think is that bad… at least the change wasn’t as bad as in 2014 😛 now THAT was messed up. I do think it lost some of it’s power, but I still like it!

I preferred it in Albanian. The song has lost its power.

Perfect recipe of how you take a great powerful song and turn in into a powerless mess. She butchered it.

We used to have eurodance, but now we have euronihilism.

Didn’t like the revamp at all; the previous version was more powerful and fierce. Now it sounds too cheap with this music arrangements, even the lyrics are stupid in English. Preferred to go with the original one.

1. They killed it by switching to English, and 2. The revamp brings absolutely nothing, it’s neither better or worse, it’s just dull. I would be very surprised if this qualifies.

I slightly prefered “Perralle”, because of the language and the drama, but I still love this.

They really messed up with the revamp if you ask me. They had a wonderful song (for me it just needed a little cut to be as short as Eurovision commands). I always thought that I’d prefer it in Albanian, but they didn’t only change the language, they sucked the power off this song to make it a ballad with a light dance (?) beat.
It was my 8th, I think it is below 15th now.

This is why I think translations don’t work. The only positive things I can say is that video is very well made and that her English accent (at least in studio version) isn’t as bad as I dreaded. But the lyrics…. COME ON? ‘I love you’ Seriously? On rare occasions, that CAN work (Lithuania 2009, although I did prefer his Lithuanian version), but this isn’t good. It is generic, generic, generic and probably more generic than Denmark. Well, one goes up (Israel), one goes down (Albania). Now we wait for Malta and Bulgaria to unveil their songs and we have… Read more »

Surely her vocals on-stage will be enough to carry her through to the Final! She’s one of a rare breed of artists who sound amazing live, far better than they do on studio versions!
All those who are saying this song lacks power – wait until Eneda performs it live and she will inject the power back into it!!
I’m confident the Juries will love this too!

First time posting here, hi from Australia~ Honestly it’s not the English translation that wrecks the song, it’s the production – they took away everything that made the original Albanian version work. It was the rock edge with the orchestra together that made the song, and instead of ramping up the electric guitars for the added drama they stripped the guitars away so all the intensity is gone. It’s a damn shame too; ‘Perralle’ was in my personal top 5, but this version isn’t going to get Albania very far at all. Probably on par with Elhaida Dani’s ranking last… Read more »

Albania is doomed :/ They really can’t rely on the staging as they tend to go for simple staging, which works with some songs, and as per voice she is amazing but will it be enough especially know that in the same semi there will be Macedonia, and Ukraine. I loved Perralle so much, and I want to love this one as well but I just can’t stand the letdown that the chorus gives after the phrase “that’s why I love you”.

So I hated the Albanian version not just for that ugly language…
Still hate this one very much. Can’t decide to put Albania or San Marino last in my top

The language change doesn’t bother me, although I liked it in Albanian too. But, just like some of the others here, I really miss the strength of the chorus in the original song.

Oh, yes… and the lyrics in English aren’t half as good as what one could make of a rough translation of the original message. Not half as good!

I was such a big fan of the Albanian version. What a letdown. Power vocals gone, drama gone, instant impact gone. Ugh.

IN SHOCK
She’s still beautiful, sings great, and the tune is nice. But Perralle was not meant to be nice! It was a dramatic tale of mad love, heavens!!!
I wonder what the composer had to say about this washed down version. Don’t misunderstand us “likers”, we are actually not “hating” this version. It’s just this lacks the power, the energy, the madness (hate to think of ‘drama’), the rawness of the first. To boot, Perralle as it was lacked nothing. Please, people in charge?!

And THIS Ladies and Gentlemen, is how you destroy a good song by switching the language into english =/ I’m so grateful Italy didn’t do that entirely

I think people are a bit angry because she switched the language to English and I agree, in Albanian it sounded better, but that’s still a good song. Albania can really do well in Stockholm, I really like this song

the lyrics are soooo bad
should’ve kept it in Albanian