News has been coming in fast from this year’s Head of Delegation meeting. We’ve already reported on Sweden’s draw in the running order, but there’s more information that has been fed through via the EBU. With all songs having to be presented and paperwork filed at the meeting, we’ve also had the confirmation of Malta’s new song “Walk on Water”, as well as Bulgaria’s song title “If Love Was a Crime”. Here’s a roundup of some of the other important things that y’all will want to know.

The EBU has confirmed that the provisional dates for the two Semi Finals and Grand Final will be the 16th, 18th and 20th of May respectively. These dates have been chosen to avoid any potential clash with major sporting events that might detract from the worldwide audience. This, of course, does not guarantee that these will be the dates. The host broadcaster has the rights to ask for these to be changed, so maybe don’t set those days off work quite yet!

Italy’s song to be titled “No Degree of Separation”

As we’ve previously reported, Italy’s Francesca Michielin will still mostly be singing in Italian at Eurovision, with just one chorus in English. RAI have, however, opted to present the song with the English title, “No Degree of Separation”. The title is a straight translation of the Italian song title, “Nessun grado di separazione”. Originality in the house, y’all. There’s still no set date for the reveal of the song in its Eurovision form, though.

We’ve already seen some of the acts talking about filming their postcards – for example, Justs posted a video of himself playing guitar in the streets of Riga. That might be a common theme for the acts, as the EBU confirmed that the postcards will focus on the acts in their home countries. Produced by Camp David, the production team behind the Eurovision 2013 postcards, each act will be shown doing activities in their personal life and around their country. The 2016 dandelion motif will also appear in the postcards. This sounds very similar to the 2013 postcards, with less of a “tourism” focus that we saw in the “Austrian holiday” postcards in 2015.

We also learned that the official Eurovision 2016 CD will become available from the 15th April. Not long to go now! Are you excited to see what the postcards will look like, and do the Eurovision 2017 dates sound good to you? Let us know in the comments section below or through our Twitter page. 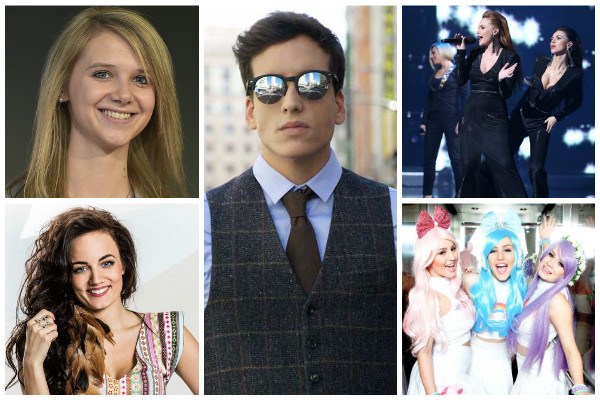 The postcards have gotten pretty boring over the past few years.The 2013 ones were all the same: “Artist wakes up, artist goes to voice lessons, artist goes to dance session, artist goes out with friends” over and over again. I’d love to see more abstract postcards again like in 2009–those were visually interesting and appealing!

@Racal, as DiabloRoma said, Francesca didn’t choose to sing also in English in order to get more points. She simply wants her message to reach everyone, because, despite being only 21, she’s aware that music is made for delighting our ears, but also for touching hearts and waking up sleepy consciousnesses. That’s what makes an artist different from a singer, I think. Millions of people will listen to the entries on the Grand Final for the first time, so having a title in English and one chorus will definitely help give them an idea about the meaning of Francesca’s song.… Read more »

just go and see what Francesca said on her FB page. Then go back here and talk about it.

Plus, SHE CAN SING in English -> search for her songs Amazing, or Sons and daughters.

@Fransen, Criticca: Italian (just like French) has a poetry that English will never have. Sure, English is probably understood by more people, but it doesn’t change the fact that the sound of it can’t compare to Italian. She’s not even singing the entire song in English (which, even though I wouldn’t have liked it, would have made more sense), she’s just butchering her Italian with 4-5 filler sentences in English, just for the sake of saying “Hey, I sang in English, so cool!!”. Won’t bring her any more points. Just like so many before her (Natasha St Pier, Nina Zilli,… Read more »

@Never Forget. There is no need to insult people who disagree with you, this doesn’t help your argument. You specifically stated that they drew number 9 while number 4 was already out. And I am telling you that is not the case and you should review the video again – it does NOT show that. I have no interest in believing the EBU, if I felt there was genuinely a concern I would listen to you but you are providing us with a “fact” that is not correct. I do agree they should have a put a line under the… Read more »

I count on a large flap of this event. Only this can satisfy me.

You need to be a masochist or necrophile to like the Eurovision Song Contest 2016.

and maybe 6 is draw, why they put . on number 6 and 9. It is funny they did t know is 6 or 9, and after that they draw 4, and after that decide it is number 9 instead of 6. HAHAHA.
Maybe believe in that EBU refence group full of nordic members and eurovision fans from western like you and Robyn.

@Never Forget – what are you basing that on?
There seem to be a ton of envelopes in that glass box.

However this is not true, look again at that moment of the video, you do not see number 9 being drawn while at the same moment they hold number 4, your statement is not correct.

I don t believe that in that box was all numbers from 1 to 26.

@Never Forget : You already asked this in the previous topic about Sweden being 9th, and Robyn explained that they were not sure if it was a 9 or a 6, so they drew the second number (4) to confirm which way up the number should be.

You do not see him drawing number 9 while number 4 is also present, the video is cut to the point where 9 and 4 are both being held up.

Do you all watch first video . See moment at 1.08 , when they draw number 9, and Ola had in same moment paper with number 4. Is in this glass box we had all numbers from 1 to 26.

Great move for Francheska to change the title in English. The Italian title is long and not everyone will understand or remember it afterwards! It has a beautiful message and the rest of Europe deserves to know the meaning behind this masterpiece!

Kind of disappointed about the repeat of postcards. 2013 had really nice ones (as did 2014 and 2015). Would have been nice to see some kind of revamped version if that or something new and different.

Just occurred to me!

Who’s making the Eurovision anthem this year? It’s Sweden so I heavily expect good things unless it’s anything like the interval acts in Melfest this year like “Gina Diwari: A Love Story” then Sweden can keep their intentions to themselves!

Francesca explained why she decided to translate the title and one chorus into English, so that the message of her song could be understood more easily by everyone. “I’m excited and honored to represent my country in Europe. I wanted to enter with my song from Sanremo as it is a song that wants to cancel all geographical and cultural divisions and invites us all to embrace the one and only direction. We are Italians, we are French, German, Lithuanian, Swedish… We are blonds, brunettes, redheads… No! We are people with hopes and joys, dreams and delusions. We are all… Read more »

2. Who will drop out? Ukraine? Israel? Lithuania? Estonia and the Baltics?

Italy is detroying its song piece by piece. Who in the world thought that “No degree of separation” sounded better than “Nessun grado di separazione”?! They’re just butchering that song with English.

They were my number 1, now I think the Netherlands will give a way better performance.

Hopefully the CD will have bonus tracks like in 2013 and 2014, also make it available in Asia on iTunes too.