Rigging and lighting, it’s getting exciting!

Eurovision 2016 is about a month away and the team at SVT are moving full speed ahead to get this year’s stage ready inside Stockholm’s Globe Arena.

Producers revealed the Eurovision 2016 stage design back in February and the skeleton of that design is finally taking shape.

Designed by Frida Arvidsson and Viktor Brattström, who also produced the stage for the 2013 Eurovision Song Contest in Malmö, it will include an army of lights and an LED wall that breaks open to allow artists to move inside of it. This stage is alive.

The #Eurovision2016 stage is taking shape inside Globen Arena. For exclusive photos and on-the-ground updates, you should follow the #Eurovision Diary 2016 blog from M&M Production Management at: http://m-m-pr.com/index.php/eurovision-diary-2016/

Ola Melzig, the Technical Director of Eurovision 2016 and the head of M&M Production Management, is running a very cool blog on the stage construction called the Eurovision Diary 2016.

His exclusive photos, daily updates and on-the-scene reporting will no doubt stir the stage technician inside of you! You’ll see women in hard hats and 2-D cameras being lifted into the air, and technicians figuring out how to colour-match the LED floor with the LED walls.

Speaking of which: This screen grab of the diary reminds us Sergey Lazarev’s video for “You Are The Only One”. Are there other clues to other performances on the blog?

Production hints? The M&M Production Management Blog about the Eurovision 2016 stage and set construction recently featured this photo and caption. Do you think they are working on recreating @lazarevsergey's #Eurovision video? #Eurovision2016

Elsewhere, we’ve already learned that around 100 trucks brimming with equipment will drop their loads in the arena in the coming weeks.

Twenty to thirty people will work on the stage every day for the next two weeks, ultimately creating a stage that is 24 meters wide x 16 meters deep with an LED wall that’s 37 metres x 10. The LED floor will be 230 square metres — definitely large enough to create a pool of water for Ira Losco to walk on and a prison cell in which Poli Genova can contemplate her love. The stage will include 330 lights, but that’s not including the countless lights that will hang from the ceiling and around the arena, illuminating Justs, Jüri and Donny in all their glory.

Fans of smoke and fire — honestly, who isn’t a fan? — will feel the heat as the stage will include 74 recessed pyro-positions in the stage. So don’t wear too much hairspray if you’ve got standing tickets near the stage!

What do you think? Will the stage be as good as the one in Vienna, or maybe even better?
Photos: Courtesy of EBU/SVT/LITECOM/M&M Production Management/Ola Melzig 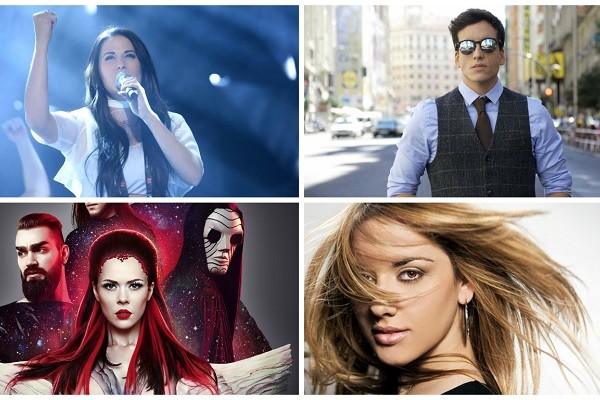 rigging and lighting, its getting exciting. another reference to russia’s song.

The stage will look incredible once it’s complete. SVT are making up for the mistakes of 2013 it would seem. The LED wall looks amazing.

I know it’s not a well liked song, but Nicky Byrnes “sunlight” would look amazing on the LEDS, if done right.

No one has actually said anything about how they see Russia as a winner. Not this site, not SVT and certainly not any ambassador. I doubt ambassadors are even interested in this contest, and it’s really not their place to say anything. Ambassador of what exactly?
I think you meant Björkman, the Swedish head of delegation. All he said was that he understands why the song is a fan favourite and he can see why fans appreciate it. But he has never said Russia will win

So again, no one is preparing for Russia to win.

I’m pretty sure they aren’t planning Russia’s performance yet, it says in the picture that they are making sure the colors of the wall and floor match. It needs to match for the entire contest. Geez.

Swedish ambassador said that they see Russia’s win this year. So they prepare.

@fikri
Last year the stage was finished just before the first rehearsals. Atleast thats how i remember it xD

I meant Czech Republic, not B&H.

It’s been a long day.

Looking forward to it. How each country utilizes the effects of the stage is one of my fave parts of the contest. Bosnia-Herzegovina & Italy were two of my favorites last year. Sweden too, of course.

Nobody made a better stage than the Copenhagen one.

What Danes do best are stages.

I usually hate Melodifestivalen stages; same for 2013 and 2016 Eurovision stages.

I’m so interested to see how the stage will turn out. I must have really bad depth perception because some of the proportions (size of the audience v stage v size of the performer on stage) seemed confusing to me! I was more skeptical of Vienna last year and that turned out okay once I saw irl pictures, so I expect the same from Stockholm 🙂 sidenote: i didn’t know wiwibloggs had its own wikipedia page! thats so cool, i was just going through random links and ended up on the page. It said that the EBU even called the… Read more »

exciting blog! definitely going to check it everyday. when is the stage expected to finish? next week?

Prepare yourselves for the best Eurovision ever people!

A very warm welcome to our country! 😀