Back in March Frans stormed to victory at Melodifestivalen with a simple and stirring performance that hinged on his voice and his song rather than fancy pyro or exploding LED screens. Today during his first rehearsal he stuck to that formula, essentially cutting and pasting his performance from Melodifestivalen. The performance takes well to the big stage and Frans seems even more isolated from his surroundings. It enhances the mood and adds to the visceral quality on show.
There are two slight changes. One sees the camera pan out super high as a white spotlight appears near his feet. It makes Frans seem like he is shrinking as a gold lyric appears above his head. The second change sees Frans walk down the catwalk to a platform in the audience. For me that doesn’t really fit with the song, whose strength comes from purity and simplicity. The flying flags and screaming fans will surely distract from that.

Sweden: Interview with Frans in London

Frans’ “If I Were Sorry”: Reviews and Reactions 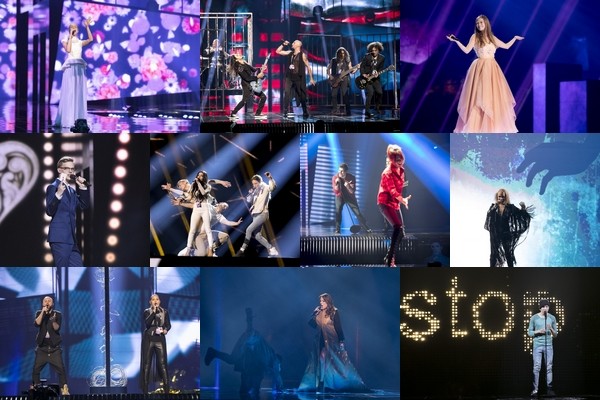 Poll: Who had the best first rehearsal on May 3?

24 jours ago
If I Were Sorry

SPOTYFY WILL EXPLOAD 14/5
Frans and Sweden has no reason to be sorry 14/5 if Frans will get low points. spotyfy will expload.

@eugineESCUK I was genually interested of your opinion and had no intention to be rude You may have right.I have also read that OGEAs ranking has been a strong indicator. Belive that 8/11 in topp was correct but I am not sure!? When I reed that downloads from earlier years has been a weak indicator, it crossed my mind that i might only be how good raknings the diffrent countries in a particular time. Not the total streems over a period of time. If it wasen’t the reaktion from genuine escfan of the mellofest result you would convince me, but… Read more »

@EugeneESCUK. I don’t agree whith your analyce that the resultat of OGEA UK will predict if UK will give Frans high score! I have a feeling that many devoted eurovisionfan follows the swedish mellfest. I belive that a typical ESC fan has their favorites from the melfest and most ESC fan like other acts like Oscar ZIa, Ace Wider, Molly Sanden. Therefore and because of the fact that it’s a song diffrent from what escfans had expected from sweden many in OGEA are dissapointed. I don’t think that Frans will get high scores from some countries but one countries I… Read more »

@bella
Calm After the Storm was a good song, with good staging, and Ilse and Waylon can actually sing. There is no comparison.

@o.p
No one ‘whined’ about Loreen, or Robin, or Sanna.

All of you forgot that calm after the storm was a very calm song (whicj I personally liked very much) almost monotonous and it wasnt a typical eurovision song.It finished second!!!! If I were sorry is a calm song and it is very appealing. I know that is very difficult to win but it can.Juries last year supported more the modern songs like heroes, love injected and rythm inside than classic songs like grande amore.Frans is cute, gorgeous that english accent is very attractive his song is modern catchy fresh very 2016. He will charm Europe ! People between 12… Read more »

Hope we (Sweden) don’t win this year, so we can leave esc and maybe return in year 2037. I’ m not going to miss neither esc or all the negativ whining about Swedens artists and songs.

@bella
There is no chance of Frans getting 12 from the UK. He’d be lucky to get 1 point. The UK is closest to Australia in terms of music tastes and, as we’ve seen, Australia doesn’t like the song.

Malin I personally believe that Frans can be in top3 because the people who hate him in fansites are not a serious indicator. Millions will vote in the final.i expect uk to give him 12 points.Because in uk they know about modern music.

With a performance like this, why is there a need for a rehearsal? Not saying it in a negative way.

It reminds me a bit of “Standing Still”, the German song in 2012 that ended up being 8th in the final. Since this is Sweden, I would say 6th place is realistic. It will do very well with the juries again but overall there won’t be enough televotes to win eurovision.

Please, ESC Is sopposed to be an event whith love. We can dicuss whith respect for eachother, other countries or the artists.

Poker, Ukraine can’t sing? Jamala is opera singer, and who is your Frans? I would enjoy greatly if they both will sing in duo some SONG, not the stupid chanting your Frans tries to deliver instead of song. then we’ll see if he’s good to at least graduate from school with satisfactory grade in singing. When I was young I rejected to sing in school stupid songs while teacher plays stupid Russian garmoshka, even this allowed me to graduate, but it does not means that I’m a great singer. Frans looks just like that. He got to contest with silliest… Read more »

@EugeneESCUK Nigther we in sweden or the singer Frans himself expect sweden to win. It isn’t a typical ESC act and some parts of europe will probably not appriciate this type of song. But we are not sorry! I think that we did the right thing to send the song that has been most appiciatet here in sweden, not the one we think will get the best resultat in ESC. I which that Frans will enjoy him self and have fun meeting the audiens in the globearena! It would be fun if he became top 10! If not! So what,… Read more »

I like how simple it is, just what my environment is – simple and minimalistic, with no dumb decorations and fake things (talking about apperrance). That’s why this performance reminds me of my home and I love the song.

I like Frans, and his song is on my playlist, but he’s not very charismatic to deliver, like Margaret from Poland. Both songs are great, but lack of experience leaves the message behind.

Umerkim: Frans can sing. Its so many artist this year who cant sing. Russian, Ukraine, Norway, Azjerbaijdan and many More.

I believe it’ll be improved so no one judge until the 2nd rehearsal.

And LOL to those who defend his lack of charisma due to his age. I mean, really?

Look at Lena back in 2010. This Frans of yours is miles behind in some other regional league. Not even national. Oh, I hope his crush wont be too much of a shock for you, fellow Swedes. Haha

It’s just different. It won’t appeal everyone’s taste, but it stands out and does it with quality, considering its genre.

This will place quite high, like it or not. Thinking about winning, is a bit premature, but may end up being one of the favorites after everyone has rehearsed.

The song has grown on me… It bored me in the beginning but now i caught myself dancing on it while cleaning… Problem i see is that most televoters will hear it only once and the first time you here it, you say… naahhh

he’s not sorry but i feel sorry for him for having to sing coz it looks like he’s having a hard time singing the song since he can’t sing. oops

It’s possible that will happen!! Frans will steal the moment on May 14 totally. HOWEVER, I think it will be hard for us to win twice in a row, but you never know 🙂

I want to hear these words from Petra and Mans:Ladies and gentlemen the winner of eurovision song contest 2016 is Sweden. And Globen will go crazy….like a mundial final.Go Frans go for gold!!!!!!

If i were sorry is the best song by far. And yeah i absolutely want Frans to win .
HAters wait till 14 of may and u would see. Ladies n Gentlemen we have a winner n thats SWEDEN

Wait until next saturday.. The arena will go bananas. It Will be a huge moment.

You are missing the point. This is all about singer-audience connction so how can you judge without it? It will be MASSIVE in the hall.,

First of all, he has no charisma or LIFE inside of him. The song has remained the same: dull & ordinary.This is not me hating on Sweden but I’m glad that they don’t have a top 5 entry this year.
Frans sings & acts in interviews like he is held hostage on Eurovision.
This is not top 5, nobody can convince me it is.

@cheescake
Watch Frans’ press conference. He was so nice, close, charming and it felt so comfortable for him. He has so much truth and personality

This is temhe worst song from Sweden since 2010, still great tho and 4th in my overall ranking. This is one of the 2 songs (The other one is The Netherlands) that stand the most for me because they kept it real. Goodjob Sweden but i still hope to see Mollt Sandén next year giving Sweden their 7th Victory!!

@Kane: Well I’m 18 years old myself therefore I don’t think it has something to do with age…
I’m sorry but he just comes across arrogant and bored like he doesn’t care at all. No enthusiasm whatsoever. And I know that I’m not the only one thinking like that.

Wait till next saturday. He is gonna be amaizing. We have a winer

@cheesecake “The song itself is good, but Frans’ attitude is SUCH a turn-off.”

And this is what a true contender looks like. After all those dissapointing performances comes Frans and with his current song and simple staging he shines like any other does.
My only concern to say that he will be the winner is the running order but If I were sorry is the best song byyyy far! 🙂

I hope we send something much better next year! I understand why Frans is liked in Sweden, but Europe won’t get this! Therefore I hope we will be back on track soon. That’s all I can think about when watching our own entry.

The song itself is good, but Frans’ attitude is SUCH a turn-off. Only reason why I don’t want this to do well.

Okey come on haters! Bring on the hate 😉 It won’t hurt him at all. He will place better than most of the other countries 😉

The stagings boring to me, same with the song. But it will stand out with all the effects others have.