During her first rehearsal, Nina Kraljic from Croatia came out in a structured kimono-inspired piece. We knew her backing dancers would tear the dress away in the second rehearsal, and we expected it to reveal something fabulous. Sadly this wasn’t the case. She’s singing “Lighthouse” but someone has definitely dimmed the lights…

The styling choices don’t seem true to Nina’s personality or style. While the structured kimono definitely fits with her edgy, avant-garde image, the metallic dress she reveals is very Las Vegas showgirl. She looks like a metallic peacock who had a bad encounter with a fan. This cringe moment will surely make her a contender for the Barbara Dex Award. We suggest the structured kimono stay on during the entire performance. Even wearing a lighthouse costume would be more appropriate.

It’s important to note that Nina does sound absolutely phenomenal. Unfortunately the costumes distract from the vocal, which may hinder Croatia’s chance at qualifying. The Netherlands: Douwe Bob charms his way through second rehearsal 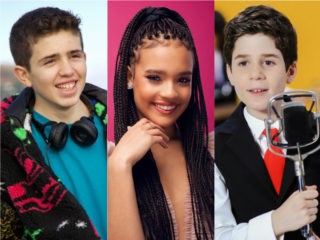 People are very mean.
That poor girl tried so hard and financed all of her work for ESC and she gets this?
And WIWIbloggs are so unprofessional, they are so mean in this article.
SHE sounds amazing, the dress is something different and I really feel sorry for her, everybody’s attacking her. I am still sure she will SLAY the Motherfu*king stage this tuesday.
She’s not only qualifying, she’s going to be in top 5

sick and sounding absolutely wonderful.
she will slay tuesday.

Wiwi is it possible for you to speak to the Croatian delegation about the reviews of their current staging and maybe get it changed? Please try and help Nina and croatia

Okay. Nina is ill, and that’s the excuse for the rehearsals, But who guarantee that she won’t be ill in 3 days?

Great costumes, could win some cutting edge fashion competition, honestly I love them! But they are so WRONG for this song!

Miki:
There is no point in telling people who to vote for. I’ll vote with my ears, eyes, and beyond anything with my heart. I’m afraid Nina has lost me with her rehearsals on the latter 2. This is not a radio competition.

Tove:
Why being so nasty to Josh? Your childish need to hurt him for his comments about Nina’s rehearsal won’ help her entry one single bit. Grow up!

I believe she was either not feeling well or she was saving her voice in this rehearsal. But she still managed to pull out a decent performance. I don`t care about the dress or any of these stuff. After all, this is a song contest not a fashion or a beauty contest. Guys, let`s show to the world that in this competition is the song that matters, not the dresses, the hunky dancers or all of the other stuff. If you like the song vote for Nina in the first semi.?

JOSH SALMON; if her dress for you looks like a decorated Christmas tree, then you look like a shaved feminized Santa Claus!? lol

I must agree with everything you said. Song is one of my favorite but with this performance, song just can’t “shine”. This ain’t that good. In Ninas case more is less. Please Nina change clothes asap and put some effects. It’s just too dark. You could end like The Netherlands last year.

These dresses are so weird and over the top… and I can’t love them more 😛 I don’t care for the results, for what everybody else thinks or if she wins the Barbara Dex Award, I LOVE THESE GOWNS!

JOSH SALMON; If you do not like her dress that’s your subjective opinion. I can also express my personal opinion that you’re wrong. I also tell you how you look. Your way of dressing and presentation here is very bad. To say that you hate her dress is the same as if I say I hate your effeminacy; ugly and tasteless, isn’t it?

I don’t know how Croatia can save this now. I already said a month ago that the live performance just doesn’t come to life, and now it looks like it will be an even bigger disappointment. Qualification is in doubt?….

I’m just surprised there isn’t more effect on the LED lights and that there isn’t any smoke. This song deserves more drama and more light on stage. I love Nina, her voice, and song… And honestly the costume isn’t bad… It’s just the production doesn’t come together like I wish it would have.

Yep Josh, you’re absolutely right. The costumes distract from the actual song so much so that it will most definitely hinder her chance at qualifying. Unwise choice!

Bjorkish, funky, TildaSwintonish, amazing. Brilliant voice and probably the nicest song in the whole of this almost lousy competition. We love your bravery, Nina. She and her song definitely deserve a vote.

Once my favourite entry, now I’m so disappointed that I doubt she’ll qualify. Well, such is life… If Nina goes home early it wouldn’t be unfair as a number of other artists showed in the last 5 days to be much better prepared for the race. The song is amazing per se, but the whole presentation in that complicated, silly looking attire is just pathetic. Some say – but she’s different! She’s avant-garde, etc.. That’s all OK. Avant-garde could be both meaningful and magnificent if one knows what they’re doing. Unfortunately, Nina appears as someone who’s lost her way in… Read more »

This is really disappointing.

There should be one focus for this song, and one focus only- Nina’s voice. No weird-ass dresses, no dancing druids, no awkward costume changes. Stick Nina on the stage, and let her wail, and this song fights for Top 5. Muddle everything with some overcomplicated crap, and its struggling to qualify.

Right now Croatia’s got a loaded revolver, and its pointed straight at their foot.

Whoever designed the whole performance should just be fired on the spot. Has absolutely nothing to do with the song. Best song in the contest, but unfortunately a very bad performance.

The Dress is slaying.. fashion-forward! Lead the way to the final Croatia 😛 !

I understand the dress even though it’s not my cup of tea.It will definitely look better on TV so I hope she qualifies…

Nina said that She is very ill but I need to say somethibg. I love this drees so much and I saw it on instagram..Nina profiles. And she get photo of her dress but back size and you can see that there is in her drees there Big big 4 lights 😀 ..So we are expecting some surprises 😀

I’m not sure which dress is more awful, I don’t like any of them. I hope the song itself will attract enough people to vote for it. It would be such a shame if this wouldn’t qualify because of wasted staging.
Nevertheless I like the idea of Nina representing the “good” in white and the backing voalists the “evil” in black.

I wouldn’t even be shocked if she doesn’t qualify if there isn’t something better to come in staging and get vocals don’t improve, which was definitely not on my radar as a possibility for the last couple of months even in this stronger semi.

I love this drees so much !!!!
So difrent from everyone else. Only that part that is falling from arms is :S, but overall BIG BIG plus for DREES 😀

I love the dress and Kudos to her for being so brave… but sadly the people at home will not get this concept. If I were Nina , I would go for something less risky and play safer, because her and her song are top 10 worthy

NOoooooo! Don`t tell me that this dress will light up! 😉 Mamma mia

One surprise is still waiting for the semi-finals! I don’t want tell you!

And when you’ll go on the Armenia thread here on Wiwi, their comments are that she (Iveta) looks amazing…while forgetting that this is a song contest in which the presentation of the song matters but these two songs are totally unrelated and Iveta wears her bathing suit. But that for you gays is WOW. This is not.

Sometimes, I just can’t control my LOL from your comments.

I don t believe this boring song with no charisma singer was on 3 rd place in betting odds for victory.

Croatia 2016 is Slovakia 2010. Big fan favorite who flop in semi.
They have worst rehearsal till now with San Marino.

For the love of God, leave the dress alone.. Who cares.. Have you seen how many people have looked on those video. At this moment, only Greece is in front by the number of wiewers, and is telling a lot. People watch it because it is unexpected! Deal with it

Little by little the real haters are coming out! The girl is great and your predictions are completely unimportant!

Apart form the dress it wasn’t that bad of a performance. Still needs some more work to do.
Dresses and styling can actually influence success a lot. And the dress is a huge distraction form a great song.

Why does Croatia always feel the need to do a costume reveal? BORING
Her vocals are great, but the staging is a deal breaker I think, remember Macedonia last year?

The commentary is harsh but true.

and that’s okay with me, that you support her

i don’t know which dress was worse, from the 2 dresses

Idk, I love the dress. She’s not going to a fancy dinner party. She’s performing. The more out there, the better.

And it was all going so well. 🙁

You have a good song and you could do very well but you destroy everything with a staging like that. Croatia, that’s just stupid. This may even not qualify.Why Croatia, why???

Well, I don’t know what you expected. She is different from everything you’ve ever seen. It’s not the dress that gives you victory, there are many, many elements. In the second rehersal she sounded amazing, as always, Staging is simple, and the dress is just a dress. Nina is an artist, she is not Iveta who plays on sexipil, and not everyone understands that. Besides, I also have to say, that it is Croatia who we are talking about, and let’s be honest, who will vote for them? Bosnia, Montenegro, and who else? Now, everyone will be talking about them,… Read more »

Not so bad, but I’m afraid her qualifying is under the question.

This song remains my favorite this year. I like the dress, even though it’s very weird but the staging is just too simple. Croatia might not qualify, everything can happen.

Nina should just wear the dress from Amsterdam and hide the backing vocals.

Because now It’s more like a parody of “Lighthouse” than an actual performance.

OMG THIS IS AWFUL!!!! BOTH THE SINGING AND THE DRESS ARE A DISASTER. SHE IS GOING HOME SOONER THAN EXPECTED!!! SORRY CROATIA!

“Nina does sound absolutely phenomenal”?!
She’s not. She was off key several times during this rehearsal.