Eurovision is over for another year, but the music plays on. We round up some of the latest releases from former contestants, including Anna Rossinelli, maNga, Tom Dice and Yohanna. But first, let’s begin with Elaiza.

At Eurovision 2014, Germany’s Elaiza asked “Is It Right” and Europe responded with a massive shrug of indifference, placing them 18th in the grand final. Their painfully twee follow up “Green” failed to light our fire and we were all but ready for them to slip into obscurity. And then “Hurricane” dropped, blowing all our previous perceptions away. The track is the first cut from the trio’s sophomore album Restless and sees the ladies shed their cutesy image. The sound is still very much indie folk-pop, but now the group are the ones calling the shots. They’ve reinvented themselves — “I push the button and restart the play… I don’t care about yesterday, my life begins today”. Before they were pleasant and inoffensive, now they’re fierce and independent. You’ll be tapping your toes and humming to this tune for some time to come.

From bluegrass to rock, Yohanna has dabbled in plenty of musical genres since reperesenting Iceland at Eurovision 2009. But for her latest effort she’s returned to the simple balladry which earned her second place in Moscow. “Revolving Doors” sees the “Is It True?” singer ask herself yet more questions. Should she be in a relationship with this man? Can things change? Are they going round in circles? It’s sung beautifully, but in a world with Sia and Adele it comes across as dated. There’s no grit and the piano tinkles, while pretty, don’t help. The song picks up towards the finish but overall it’s far too safe.

Tom Dice “Right Between The Eyes”

Six years on from Oslo and Belgium’s Tom Dice is still playing his guitar. However, now, instead of chasing dreams he’s trying his best to hold onto what he has. “Right Between The Eyes” sees Tom try to shake off a reputation for “wandering eyes”. He insists that it’s all in his lover’s imagination, but she’s having none of it. It’s rockier than his Eurovision effort, yet still on brand. He’s progressed artistically without selling his soul. The accompanying music video is simple but very clever. We see Tom and his doubting girlfriend out for dinner. The screen is split in two, illustrating the scenario from each person’s perspective. We see a full range of emotions as Tom casually deflects her accusations only to be rewarded with a glass of wine in the face. So wasteful!

maNga’s frontman Ferman Akgül has swapped ultra glam rock for a mellower sound on his debut solo record “Istemem Söz Sevmeni” or “Promise, I Don’t Want Your Love”. It’s a simple contemplative ballad with lots of eastern influences. Ferman plays the guitar while accompanied by more traditional Turkish instrumentation. It’s strange to see him perform such a stripped back number, but he delivers the song so passionately that we’re already sold on any future material he might release.

Thankfully Akgül’s burgeoning solo career doesn’t mean the end of maNga. In January, Turkey’s Eurovision 2010 act released “Bize Müsaade Ettim” or “I Gave A Break For Us”, the latest cut from their 2014 album Isiklari Söndürseler Bile. Fellow Eurovision alum Kenan Dogulu joins them on the angst-ridden track. Its highly charged nature is reflected in the music video. Filmed in the old-fashioned 1:1 aspect ratio, it depicts scenes of destruction and hard labour. Workers slave away in intense industrial settings, while others wade through rubble. The emotion behind the storytelling is amplified by the voices of Kenan and Ferman, which, somehwhat surprisingly, blend very well together.

The melancholic moment of “Bang Bang Bang” has passed, and Anna Rossinelli and her band are delivering us top notch feel-good folk pop once more. Switzerland’s Eurovision 2011 act has gone from strength to strength since Düsseldorf, and based on their latest releases it’s not hard to see why. Despite the title, “Broken Hearted” is an uplifting anthem of hope and perseverance. Anna sings of how she once moped over a breakup only to realise that she’s not alone. She dedicates the track to all those who are still “disregarded” and “rootless”, reminding of them all the memories they should cherish. Your heart might not be broken, but it just might be melted.

The feel-good factor is turned up even higher on “King Mustafa”, a Caribbean flavoured tale of whimsy. It’s all about letting your hair down and living life to the fullest as worries and stress are placed to one side — “the king without his heavy crown, never felt so free”. The music video embraces the message, showing Anna and the boys dancing on the streets and encouraging the locals to get down with them. It’s plain and simple fun which requires just one thing — a smile. 🙂 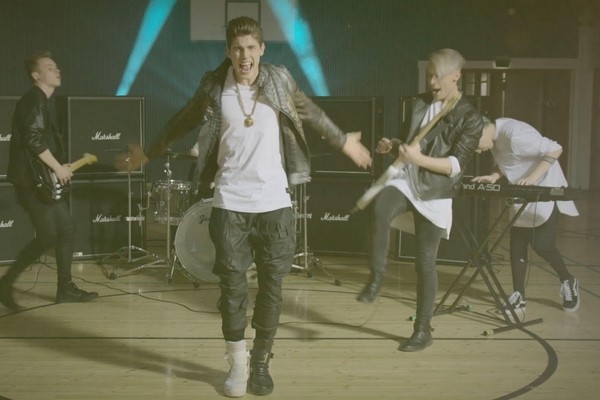 A cocktail with tears: Severina serves beauty amid the pain in “Sekunde” (Seconds)

karminowe.usta,
omg, I absolutely agree with every word
love maNga and love Elaiza

karminowe.usta,
omg, I absolutly agree with every word
love maNga and love Elaiza

a duet from Eesti Laul´s Mick Pedaja / ESC2016 Jüri Pootsmann- They had a concert together on Sunday.

The beginning of Anna Rossinelli’s “brokenhearted” reminds me “Genesis” by Grimes.

When I heard these two songs of MaNga, i realized that how much i missed Turkey. Please leave your stubbornness and come back!

Elaiza – I really like this group. Elaiza deserved to higher place in grand final. In my opinion Elaiza was better than Lena who won this competition earlier.

manGa is my favourite rock entry in Eurovision. I still listen this song. manGa gave me chills. Songs this group are very catchy. I regret Turkey withdrawed because they presented very good songs. Rock is my favourite genre:)

The purpose for anyone to do music is not to make it sound like anyone else doing something quite popular right now … if people can’t learn to listen detached from what’s hot now, respect musical identities and allow musical narratives to move you soundwise regardless trends and fashion … then I seriously question what the hell do they know about music? More like understanding how to chew bubblegums …

Yohanna song is beautiful just like her the ESC entry. Can she come back please? And… There nothing wrong with a song being simple and heartfelt as makes nice change with all the tricks and other people use. I also enjoyed Elaiza’s new song. Poor Germany really stuck when it comes to the ESC… 🙂

I really wish Anna Rossinelli would represent us again, I love their new stuff.

I can’ t recognize Tom Dice!

I came here for Elaiza. They cured me from an illness in February 2014 during their national final. Bless them.