She’s a Greek popstress who has long had her eye on Eurovision, and even made a glam Greek cover of “Golden Boy”. Now Eleni Foureira has released the song she intended as Greece’s Eurovision entry for Stockholm. “Come Tiki Tam” is an update on the classic 2000s dance-pop sound, written by “Golden Boy” composer Doron Medalie.

“Come Tiki Tam” uses modern production styles that give it a 2016 flavour, but at its heart it’s the kind of dance-pop number that could easily have been entered by Greece a decade ago. It even throws in a period-accurate key change.

If “Come Tiki Tam” had made it to Eurovision, it would have been memorable. In the song’s saucy chorus, Eleni purrs, “Come tiki tiki tam/Come, do you wanna have some fun?” and the plentiful instrumental breaks in the song would have given plenty of opportunities for Eleni to unleash some moves.

It’s a fun song, but how would “Come Tiki Tam” have held up in Stockholm against the modern pop of “If Love Was a Crime”, the emotional heft of “Sound of Silence” or the sexy edge of “LoveWave”?

Eleni made her first appearance at the Greek national final in 2010, when she was a featured vocalist on Manos Pyrovolakis’s entry “Kivotos tou Noe”. It came second to Giorgos Alkaio’s “OPA”.

In January this year, Eleni was reported as saying she’d be very happy to represent Greece at Stockholm, but that ERT were looking for a different type of artist and song that year. And we know that Argo were a very different direction from Eleni’s typical pop style.

Despite Argo’s poor placing in Stockholm, we can’t help think that ERT did Eleni a favour by rejecting the song, giving her the chance to come back with a strong, modern song. Eurovision 2017, perhaps?

Would “Come Tiki Tam” have done better than Argo in Stockholm? Should Greece select Eleni for Eurovision 2017? Share your thoughts below! 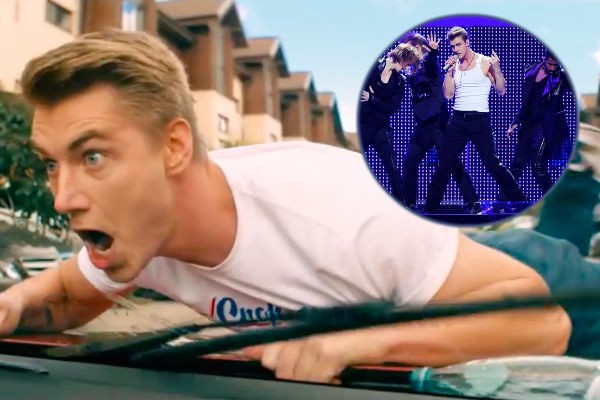 I like this song – its fun. I think it could have done well in Eurovision just because of the fact that Eurovision lacked a song like this this year 🙂 Though i would prefer it to be in GREEK and not English… 🙂

What a crappy tune! She deserves better! Glad she did not make it to the ESC 2016. She should try it again with a nice production like “Reggaeton”.

It would have been yet another disaster at Eurovision.

I’ve been listening to Ti Koitas for weeks and I loved it since the first listen, to now know it could’ve gone to Eurovision makes me giggle. Certainly not a winning song, but a lot more fun than Utopian Land, though I prefer the original version in greek!

This song has been released 3 months ago namely Ti Kiotas.

It’s not great, but it’s miles better than Utopian Land!

This one is better. I think it would have qualified, but no more.

Aww, such a shame! Else we could have had such a beautiful (first?) Eurovision romance.. http://www.pasmina.gr/exclusive-mans-zelmerlow-exchanging-hot-kisses-at-a-gay-bar-in-greece-with-famous-greek-singer-photos/

Not good, sounds pretty cheap. It probably would’ve done better than Argo did, with a good stage performance. Hopefully Eleni will come back with an actually good song.

Eh, it might have qualified. Certainly better than the awful trainwreck that was Utopian Land.

With this year’s SF1, which was strong as f**k, “Come Tiki Tam” wouldn’t stand a chance. Sorry Eleni, but if you want to go to ESC, come with something new and fresh, not with a ESC2004 reject.

Even worse than Utopian Land, if that’s even possible. What is that mess? I guess Estonia wouldn’t have ended last in the semi-final if this had participated.

this song isn’t the best, but i’m pretty sure it would qualify to the final (probably doing well in the televote but poorly in jury)

What a wasted opportunity :O

So now Doron Medali is trying to destroy Greek pop music too? Medali, Leave Eurovision alone! You are becoming as pathetic as Ralph Siegel!

It would have done as good as Armenia.

I’ve actually heard Eleni live and she was pretty good, no vocal problems as far as I am concerned. This song was a huge summer hit in Greece, sung in Greek by the title “Ti Koitas” (What are you looking at?) but I think she has other songs that would’ve done better in Eurovision. If anything, this would’ve been saved by the televote were it to make the final in my opinion.

The song is certainly catchy, it has a summery feeling and I’m sure with a good presentation and choreography, Eleni could have set the Eurovision stage on fire! Unfortunately, Eleni is not the best live singer (don’t be fooled by her “live” performances at Greek Mad Awards, it’s all playback!) which means if she had actually entered Eurovision, it could have ended up in a vocal mess. In any case, I’d expect a similar result to “Aphrodiac”-low position in the final, but at least she would have qualified from the semis. It’s a shame that ERT chose a bunch of… Read more »

I don’t think it would place much higher than “Utopian Argo”. This is not final worthy song. Just another typical garbage pop entry…

This is even worst that Utopian Land 🙂

Typical Eurovision song, maybe some musical parts are interesting, but it would be next still-the-same-esc-pop and I think, it would be last in semi-final. Argo were different and thats reason, why they gave us more in Stockholm, than next typical eurosong. Eurovision is not one long pop song, people love this competition thanks to its diversity. Thank you Greece, you choosed Argo, despite the poor result. But you made this year more interesting. If every country would choose trashy euro pop, nobody would watch it.

I’m very MAD at ERT! (because Mad is a tv station) How could they have rejected this and instead chose ARGO! They made Greece lose their reputation of always qualifying for the final!

ANYTHING would’ve done better than the garbage they sent.Worst Greek entry by miles

its better than utopian land, but its a typical “baby baby lets have fun” song.

LOL! Seriously they are crazy! How could they reject THIS and send Argo? XDDD