In her Junior Eurovision 2016 track she asks us to believe.

And on Monday Albania’s Klesta Qehaja gave us plenty of reason to believe in her, as she unveiled a lighter, more ethereal version of her JESC track “Besoj”.

The song, which now features English lyrics in the first verse, seems less shrill than the original version. And while it may be quieter and smoother, it still offers plenty of drama and is big enough to let young Klesta stretch our her enormous voice. This, children, is how you do a revamp.

When the Wiwi Jury — our in-house panel of music unprofessionals — reviewed the first version of the song, our jurors could not stop applauding young Klesta. As one juror wrote:

Klesta is in charge of her voice and “Besoj” lets her show off her talents to maximum effect. She starts with a gentle, in-control introduction, before erupting like a Junior Rona Nishliu (though with better hair). “Besoj” is full of emotion, melancholic but with strength at its heart.

Out main concern, voiced in our written and video review, was that Klesta’s performance and song just seemed a tad too grown up — and the screecher of a chorus a tad repetitive.

It seems that Albania’s JESC team agreed, as they have altered the instrumentation and production, making this much more kid-friendly. There’s more finesse and a softer finish.

That transforms Klesta from a preternatural (and somewhat intimidating) talent into an adorable songstress with an important message. It also helps the song move from dramatic power ballad that might be played at a gothic cathedral ahead of the Apocalypse to an inspiring and relatable song that wouldn’t sound out of place in an animated fairy tale.

The staging of the video is absolutely magical, showing a red-clad Klesta walking through a city made of cardboard. The sound of the xylophone and bells smack of the nursery, while her voice remains heroic with shades of Rona Nishliu.

If they can recreate this wonder on stage in Malta, Klesta stands a very good chance of improving on Albania’s fifth place finish from last year. Greece: ERT will “probably” hold a national final for Eurovision 2017 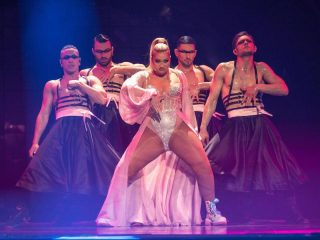 They’ve done a good revamp, but I prefer it in Albanian. In fact, I feel a bit cold when it starts, but then it grows and becomes heart-warming! For now, Albania is my #1, We’ll the staging they’ll bring to Malta…

It’s actually not only the first verse, but also the first chorus. That bothers me a bit, and the instrumentation in the loud parts sounds a bit weak. Nevertheless, that’s the best revamp from Albania in a long time. (Which doesn’t say that much)

This was a great revamp. I actually really like this video too with the “gingerbread house” cutout city and the little birds, etc. Very kid friendly and fun. I also agree with the person who mentioned how Klesta is very herself and I like that too about her.

I really liked the original, and I like the revamp. The English verse helps me understand a little more, and this contributes to the overall message. I also like how little Klesta is so utterly herself — unlike many of the girls, she is not trying to fit tge image of a cute girl. She looks nerdy at times, a little clumsy at others, but there is genuinity in her that wins me over. I still think that certain things in the video suggest that Klesta’s team is operating with a very tight budget… it’s a shame, because this little… Read more »

A great revamp, it made it really smoother and with more melody and a bit poetric. And I was just feeling it would slip out of my first place. Not gonna happen! 1/16 and 9.5/10. I think that you guys might maybe consider judging it again if it fits on your timeline? Because the English lyrics and the change of melody have given it quite a change. Maybe judge it last so that everyone has made up his mind about the revamp? Just an idea.

But here’s the bad news: Ukraine’s participation is in danger! 580,000 UAH are needed in order to prevent Sofia Rol from “becoming Ovidiu II”. In other words, we have to create a new hashtag for that: #PlanetCravesForHelp

Definitely the best song in this year’s competition. At least for me.
Come on Klesta!

wow i never thought it could be so lovely and so melodic and sooo good…Good job Albania you deserve a good spot for this. I hope other people would appreciate this too. 🙂

She’s my 2nd favorite after Poland but…wow, I think she might become my number one again. This was a very nice revamp. I think it made it better while staying true to its original melancholic feel.

So. Much. Better. She’ll still have that raw power of the original when she sings live. But now it won’t sound like she is killing cats.

Her voice is wonderful. My 2nd favourite after Netherlands.

The revamp made this masterpiece even better. I have no words.

Albania and their useless revamps. When will they learn? I feel like her vocals stood out much better in the original version, and that the English part wasn’t needed. Still, an 8.5/10 for me, and my 3rd favorite.