With only a few days left for artists to submit an application to represent France at Eurovision 2017, France’s broadcaster is remaining tight-lipped about who will follow in Amir’s footsteps.

However, daily newspaper Le Parisien has offered a bit of insight, claiming that French-Japanese act Alys is in the running to perform for France at Eurovision.

Alys is not an ordinary artist. In fact, she isn’t even human.

Alys is a humanoid persona that uses Alter/Ego technology and a singing voice synthesizer — all inspired by her Japanese equivalent, Hatsune Miku, who is a superstar in her native country. The newspaper reports that Alys (or perhaps we should say “her programmers”) have submitted a song called “Oxygen” — a rock number that describes her encounter with the real world.

Behind Alys is a new start-up called Voxwave, hosted by the Center of Arts of Enghien-les-Bains in the suburbs of Paris. The project might seem bold but the president and co-founder of Voxwave seems pretty confident about their chances of representing France at Eurovision.

He said: “Behind this seemingly odd application, Alys is a true project and the emotions she transmits on stage are real. Conchita Wurst’s victory in 2014 was bold in its artistic concept, so why not Alys?”

And how exactly would she perform on stage?

Voxwave have developed a holographic projection system that would make her look as if she’s actually standing on stage. She will also sing live — as the Eurovision rules forbid pre-recorded vocals — and would be accompanied by four REAL musicians: two guitarists, one bass player and one drummer.

Described by her founder as an alliance between French touch and French technology, Alys has already amassed more than 1.5 million views on her YouTube videos and 13,000 followers on her Facebook page.

She’s already released two albums and will hold her first-ever concert in Paris on December 17, and will possibly embark on a national tour later in 2017.

What do you think of Alys? Do you think she could bring France their first victory in 40 years? Let us know in the comments section below! 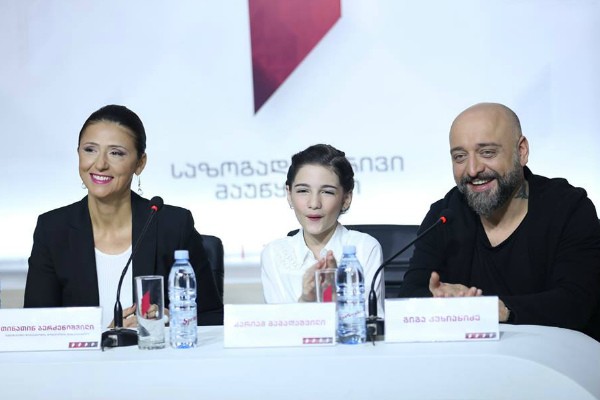 I’m sorry , but Alys is a “singer” behind the character , there is Poucet .w.

@Héctor
ALYS’ vocals are rendered in real time, so even though the rules don’t allow pre-recorded vocals, ALYS can still compete.

Do I believe she will represent France? Nope, pretty slim chance for that.
Do I believe it would be cool to have her compete? Absolutely. Seeing how much technology has evolved in ESC this would be the next logical step.
But question is whether it would be to early, whether Europe would see it as a novelty act or not
But the biggest issue is the human factor. The whole contest is built upon relating and reacting to the contestants. It’s about connecting! Kinda hard to react to programs and something that’s not there.

Just a big NO, this is rather hilarious. Next please.

sounds interesting but i am not sure if it can work in Eurovision. It depends on the performance and the SONG. But France has so many great current artists with fresh music…

well, our Ukrainian technicians can handle complex holograms as we already seen in the Voice of Ukraine. technically it’s not an issue. human factor is the real issue. what you call modernity is a step aside from human song contest performed live. not to be compared with Conchita who delievered pretty live. why do you compare electro ghost with her? Why Conchita won is because she was alive, with powerful voice and if you’ll re-listen her song you’ll notice how sensitive, soft and filled with feelings every word she sings. Can ghost do the same?

I actually could see ALYS winning the whole thing. I mean, we had Conchita as a winner and they’ve let Dustin The Turkey to represent Ireland(even if it was a joke act).
Plus Amir worked a lot to bring some..ehm, modernity? on Eurovision for France. ALYS would be a VERY HUGE step in that direction, and for ESC in general.
#paris2018 #othercontestantsareveryMEH

That would be a mess. It’s like saying, France has no talents so let’s send this grown up Bébé Lily gone emo.

Amir did a ton of great work to bring France into modern Eurovision and make them competitive with a great song. Logically, ALYS would be the next step in that trend. The song is great, and it’s an extremely interesting concept. There is quite an interest in virtual bands and performers, so this would be following a trend that’s already happening in the wider world. I hope France decides to go with this!

This “singer” is in the race to represent my country but I don’t think France 2 and our head of delegation will choose her to represent France in Kyiv.

It still is good because thanks to this, people talk about Eurovision in France, more than 6 mounths before the event.

Do France really has no singer?
send Claudio Capéo

I don’t really understand the opinions here. Why we should watch 43 live participants, if we can have one virtual? Why don’t try something really different? We don’t need 43 live participants, why? You will die if we would have 42 live and one virtual? ESC must be colourful. And Alys would be the biggest marketing for France in the ESC. Everyone would be talking about Alys. Do it do it do it!

WOW what a fabulous idea. Novelty act, original, futuristic, wow wow wow. France would be in every European newspapers. Eurovision needs this ideas, because with huge number of participants, with 50% of one type solo female, is this competition more and more boring and needs shine and wow moments. And this ideas are more than gold for ESC. Everyone would wait French act. Yes, do it please!

Well, I think this could only be done if a real girl acts like Alys, something like Cartoon – Immortality. If not, the rules doesn’t allow recorded vocals. It would be interesting though.

Kris,
I have related question
how EBU allows Russia and Belarus to exchange 12 points (always true for Belarus and often for Russia) every year? Don’t you think both countries should be disqualified for such behavior? 🙂

1.5 million views? that’s all they have got? we had a band from a city nearby, they had over 2 million views on 1 music video. they flopped in the National Final – people gave no dmn who they are. See, I already forgot the name of their band.
if French wants to secure bottom part of the leaderboard surely they can send whatever they want, holograms or even real ghosts. they are eternal big spending mule – no matter what they send the outcome will be the same +/- 5 points 🙂

Eurovision rules state that all vocals must be live, so I strongly believe EBU will not allow vocaloids competing.

As a french person i would be really disapointed if this non human thing will represent us. But I don’t think It Will be that for us. Wait and see

I had already read this article in a French Eurovision website and they said that there’s nothing against it in the rules: she even has the right age (apparently she’s 21…). The only problem for France (always according the article I read) would be that France 2 is supposed to pay for the hologram and other special effects. Personally, I think it’s both a good and a terrible idea: it’s very original and surprising, but how is she supposed to film her postcard? How is she supposed to be interviewed? How is she supposed to do the in-ear rehearsals? But… Read more »

I know Vladimir the ship for that question has sailed…..I happened to see that on the comments of YouTube video that lithuania was only country with televote present to not give points to Russia last year……so I came across this finding today. Surely they can prove the entry of Russia this year was better than Azerbaijan??

Eurovision needs
Christine and the queens …

If Alys is gonna represent France, she’ll have to be cos-played by a real-life girl, which of course has to be at least 16 in order participate. The cos-player has to be unknown in order to do this.

@Kris That’s a slightly belated question. Juries and voters are free to vote whoever they want for. Politics-motivated voting has existed ever since Eurovision began and it’s very difficult to prove. Some juries can simply say they preferred other songs to the Russian ones. I also think it’s political and unfair, but Eurovision voting in general hasn’t been fair to many – especially to singers coming from smaller countries.

@Ewan i meant her ‘voice’
it’s in this uncanny valley where it sounds part real and part… off? idk i feel like it’s too jarring to succeed
also let’s be real Alys or w/e is staying in the rock-ish J-pop genre if selected and that for me is super bland

I’ve been in the vocaloid community for 4 years. Alys isn’t actually a vocaloid, she runs on a program called Alter/Ego. Unfortunately the quality isn’t as good as vocaloid, and most of her official demonstrations are using the UTAU program, so if you think she sounds weird in those videos (I don’t), her A/E version is worse. On that alone, I have to say no to alys at eurovision, as much as I’d live to see a virtual character on the stage. Also, current songs not being good is irrelevant? The best thing about the community is that it’s filled… Read more »

I have a completely unrelated question……how does the EBU allow Lithuanian jury results? Last year they gave polina the last position and this year sergey although they were high positioned by the other juries 2nd and 5th respectively….. So this is political voting!! Why not disqualify their results?

well the music isn’t even that good so

This would be curious, but maybe the EBU doesn’t let it happen because it’s not human.

We had Dustin though 😛