Broadcaster RTVSLO has confirmed that it received 90 entries for the selection and has narrowed its list down to 16 participants for Evrovizijska Melodija 2017 (EMA). They were announced during this weekend’s edition of Vikend paket. They are…

As Maja Keuc, Amaya previously represented Slovenia at Eurovision 2011 with her song “No One”. Its 13th place remains Slovenia’s best result since 2001.

King Foo are a four-piece rock band, who describe their genre as “FOOsion”. Earlier this year they placed eighth in the Popevka song contest with “Zacaraj me”.

Lea has competed in EMA twice before, in 2009 where she placed ninth with “Znamenje iz sanj” and in 2010 where “Vampir je moj poe” took her to 10th place. Lea has previous Eurovision experience – in 2014 she was a backing vocalist for Tinkara Kovac.

In 2012 Nika finished third in Slovenia’s national selection process Misija Evrovizija. She’s made it to Eurovision twice as a backing vocalist – in 2014 for Tinkara Kovac, and in 2015 for Maraaya.

Sell Out is a ska-punk-reggae band. The friends first started playing together in the late 1990s, but formed Sell Out in 2001. Their recent singles include “Kaj naj naredim”.

Tosca Beat blend classical elements with an urban sound. They are made up of three opera singers, along with a cellist, violinist and a pianist.

Singer, songwriter and actress Zala is currently based in New York. She has released a number of songs, including “Kakav”. Zala is the daughter of Tanja Ribic, who represented Slovenia at Eurovision 1997.

Alya is one of Slovenia’s biggest pop singers. She has competed in EMA six times before, with her best result being third place in 2004 with “Fluid”.

BQL is a folk-pop duo made up of brothers Anej and Rok Piletic. Earlier this year they released their debut single “Muza”. They are managed by Raay from Maraaya.

Ina is a London based singer-songwriter. She delivers a modern soul sound, earlier this year released her single “Player”.

Hawaiian singer Duncan Kamakana featured on the fourth series of The Voice US, where he was eliminated in the battle rounds. He is also known for his YouTube covers.

Kataya is a Slovenian singer. She recently provided the voice of Moana for the Slovenian dub of the hit Disney film.

Singer and entertainer Nuska has competed in EMA twice before. In 2006 she placed sixth with “Nora sem, da te ljubim”, and in 2009 she placed eighth with “Kako lepo”.

Pop singer Raiven competed in EMA 2016. Her song “Crno bel” made it to the super final, narrowly coming in second place from the public vote.

Singer and radio host Tim is known for the parody songs he does on his radio show. He’s also a rock singer in his own right and participated in EMA 2015 with “One Too Many Times”.

United Pandaz are being very mysterious, but they’ll be performing with DJ, remixer and producer Arsello. The song’s vocalist will be Alex Volasko, who was a semi-finalist in Misija Evrovizija in 2012. Earlier this year he won the Slovenian popular music festival with his song “Pesem in poljub”.

The two semi-final format, which the broadcaster confirmed earlier this week, returns to EMA having previously been used in 2007 and 2008. The two acts with the highest televotes qualify, followed by another two ranked next highest under the jury votes.

The super-final has been scrapped from next year’s final, which takes place on 24 February. The winner will be decided by a combination of televoters and six regional juries using the pre-2016 “12 points” system.

What do you think of the acts? Are you happy Maja and Omar are back? Let us know below! 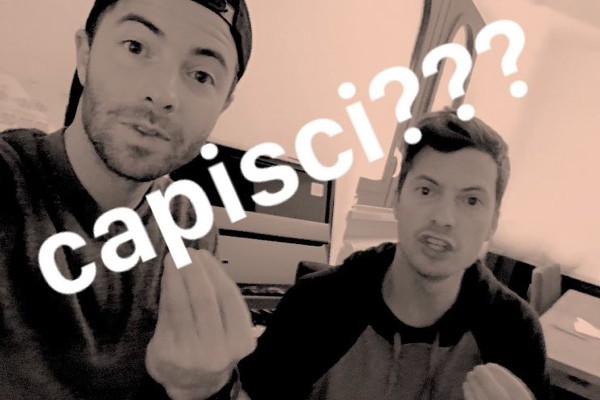 Switzerland: Sinplus drop “Capisci (One Love)” — the first single from their third album She did it! Saara Aalto makes the X Factor UK 2016 final

To me, this looks far more interesting, credible, and also less “glamour” than MF. Better 🙂

Is it fair to say this is Melodifestivalen of the south?

Killer line up with many strong acts. Slovenia is in for a great year.

Another feelgood rock band from Slovenia is Avtomobil. Would be great to hear in EMA 🙂 Maybe EMA 2018 😉

If Sloevnia heads for the “most good looking singer of ESC 2017” prize, they should send Ina Shai 😉

I listened to some of the songs by the partipating singers. Many nice ones! Esp. Sell Out 🙂 Great feelgood ska. Wasn’t so impressed by Tosca Beat. Can’t stand opera voices ..:! I heard BQL too. In my opnion, they are more like a typical boy band act, than folk music.

Oh mah gawd! Maja Keuc is returning?! That’s awesome! No One is my favorite Eurovision song ever ???? Hope she has an excellent song, because then I will root for her all the way!

Amaya or Raiven PLEASE, No One is one of my favourite Eurovision songs ever & Crno Bel was my 3rd favourite NF song of last year.

Amaya! It’s strange to see so many familiar names cropping up this year – Emmelie, Loreen, Charlotte, Krista, and Maja.

Slovenia needs a good bounce back song after last year. Should be good to see what Amaya can put forward!

Many rock and alterntive styles. it bodies very well 🙂

Lowkey shook @ this lineup. Gonna be interesting, Slovenia is coming for blood this time.

OHMYGOD OMAR NABER YAAAS. Such a coincidence: I was listening to his 2005 entry just moments ago. I’m so hyped! I really want to see him at Eurovision and win it <3

We have a very interesting line-up for Slovenia this year! There’s virtually something for everyone, from classical to folk, from rock to pop to soul.
Once the entries are revealed, this promises to be one of the strongest NFs in recent years. Personally I’m expecting the entries from Tosca Beat, Omar Naber, Zala and Ina Shai the most.

OMG, this year is going to be amazing! Amaya was fabulous in 2011 and robbed by the televoters! Really excited to see her back, as well as Raiven, whose EMA 2016 song was very good. Omar will be interesting too.

Really looking forward to this! 🙂

Oooohh. Nuska voiced Slovenian Elsa in Frozen. I love her <3

Omar Naber’s “Stop” from 2005 was the biggest semi final injustice ever.
That was a winning song in my opinion and yet Europe didn’t vote for it.

Excited to see him back ….. Also, Amaya (Maja Keuc) is actually right up there with Omar, she deserved more in 2011.
I am excited since there is a huge chance of another good result for Slovenia one of my fav Eurovision Nations 😀

I’m really excited for Raiven and Maja to be back

When can Lina kuduzovic sing at ESC?

I’ve been waiting for maja keuc to come back !!

I think Manuela had a better song than Ravien this year. Far more fresh, more different sounding and interesting. Maybe a bit too “simple” as a country pop song. But I liked it Personally I don’t expet so much from maja Keuc. Her song from 2011 wasn’t that great. Esp. not after they made it more like an euroballad for ESC. It sounded nicer in EMA, more like an rnb ballad. Omar Naber had a great rock ballad in 2005 I think 🙂 Very good perofmance too. Should have qualified tht year I think. But it was a very good… Read more »

I’m really interested in Tosca Beat’s song – their “Open Sea” is quite nice so they might be a fine choice for ESC. I also can’t wait for Amaya’s song – I like her 2011.

Raiven is the best!
She had to win instead of Manuella in 2016, I hope this year will be her revenge

I’m hoping for either Amaya or Raiven. Raiven’s 2015 entry was honestly sooooo muchhhh better than ManuElla

I read about the different song styles…it sounds great!

Tim Kores for instance. I heard a great, melodic rock song by him. Which could do well in ESC.

So many iteresting and fresh song styles for ESC! They really seem to go for quality with these songs 🙂