We’re just hours away from finding out the winner of this year’s X Factor UK 2016, with Saara Aalto set to take on Matt Terry.

But if YouTube views are anything to go by, then it seems Saara is set for a comfortable victory tonight. As of 11 December at 11:06 GMT, her duet with Adam Lambert leads the way, suggesting she stole the show.

Last night’s performance of Queen’s “Bohemian Rhapsody” raked in 240,331 views, while her solo performance of Tears For Fears’ “Everybody Wants To Rule The World” clocked 202,265 views. We are using figures from the official X Factor UK YouTube channel.

Matt Terry’s solo performance stood at 125,239 views, putting him below the final 12 group performance at 125,239. His duet with Nicole Scherzinger has still not been uploaded. Nicole definitely upstaged him, suggesting his team want to keep it under wraps…

We should note that many of Saara’s views likely come from Finnish viewers who, in recent weeks, have grown obsessed with her each and every move. There’s no way for us to factor that out of the table.

Interestingly, after last night’s show the bookies swung toward Matt Terry, putting him down as the odds-on favourite to win after trailing Saara for several days.

One theory is that 5 After Midnight fans are more likely to get behind the British singer. Still some of our other readers suggest girls, gays and grannies will do the same owing to Matt’s good looks.

What do YOU think will happen tonight? Can Saara win? Or does Matt have this in the bag? And what role is nationality playing at this point in the game? Let us know in the comments box below. 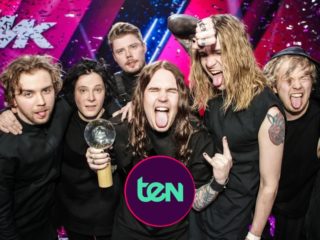 The better singer is SAARA, no competition.

Matt made the best choice, I truly enjoyed his song last time and today it has huge again!

Just checked the betting odds, she is back to the favourite!

I love Saara. But… So far she is being beaten by a better singer in Matt Terry. Saara has one chance left now, let’s see how it goes with the winner’s single. 🙂

Saara shouldnt have picked that song to sing tonight. She needed to sing Chandelier again, because Matt’s dramatic performance overshadowed hers definitely. That + the G force that that twitter pointed out will probably give Matt the victory unfortunately….which is a shame, because there are so many Matts in the world getting recognition but not enough Saaras

If you watch Eurovision (obviously that’s why you’re hear) you’ll know that view count means jack sh!t, apart from a rare few results. However, this is just two acts now instead of 26, and you cannot discount the amount of views shared between U.K., Finland and other countries. So tonight’s result will be what it will be. Saara is my favourite, but I can also see Matt Terry winning. This will be as close as Alexandra Burke and JLS in 2008. Both worthy winners!!

I have some first hand information on the Youtube topic because I’m in Helsinki and watching a lot of Saara’s videos 🙂 So, difficult to tell how many of the views took place in dear Britain. But it will be a great show we can all enjoy wherever we are 🙂

I think they both will have an amazing career after X Factor, but…
Saara has more potential to be a world’s next superstar. She has a starpower in her. She can beat Beyonce, Mariah and X-Stina whenever she wants.
There’s she can’t do. SHE IS A STAR!

In what world is Matt Terry hot?

If Saara comes second though it will be kinda tragically funny. Always the bridesmaid but never the bride.

Even in week one Saara was having massive amounts of views on her performances, which were clearly mostly Finnish viewers, so I don’t think we can use views as a piece of evidence. While Matt is above Saara in the odds now it’s still too close to call, they’re nearly equal. If Saara gives the performance of her life tonight, she can definitely take the crown, and I hope she does. Matt should’ve went home weeks ago, he’s the most boring contestant this season.

Saara deserves to win. Matt has had an easier ride through the competition being the “Chosen One” from day 1, while she has had to fight to earn her place in the final 2 (being booed off the stage during the six-chair challenge, being reinstated as a wildcard and spending 3 of the first 5 weeks of the live shows in the sing-off). British fans of Saara cannot assume she has it wrapped up tonight – complacency is a bad thing. With an uptempo song like “It’s Oh So Quiet” contrasting with the eventual winner’s song which I believe is… Read more »

Matt does not deserve the win.

If Saara wins tonight it will be a big victory for her, taking into consideration she is not British and unfortunately, many voters are nationalistic pricks. She deserves big congratulations anyway.

Half of Finland probably views her videos

I hope she can win! but whatever happens, she will have an AMAZING career! 🙂