Estonia’s ERR revealed the ten songs that will compete in the first semi-final of Eesti Laul 2017 a week ago. Now ERR have moved on to the songs from the second semi-final. Once again it features a variety of songs, including everything from Nordic electro-pop to funk-soul to mystical forest balladry (if any contest calls for elaborate genre names, it’s definitely Estonia’s). But which songs are your favourite? Listen to the tracks and vote in our poll below! Listen to “This Love” at ERR.

Angeelia – “We Ride With Our Flow” Listen to “All I Need” at ERR. Listen to “Verona” at ERR. Listen to “Make Love, Not War” at ERR. Listen to “Electric” at ERR.

What are your favourite songs in semi-final two of Eesti Laul?

So, which of the ten songs top your list? You can vote for as many songs as you’d like, but you can only cast your votes ONE time. Be sure to click the box next to each act you want to support before pressing submit. Then sound off in our comments section below. 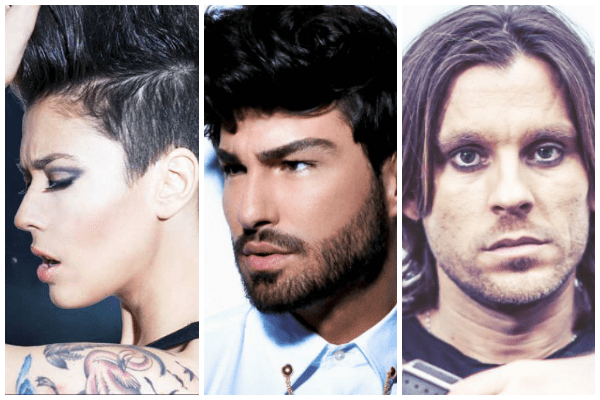 POLL: Which of Spain’s 3 Eurocasting finalists should make Objetivo Eurovision?

Cut-throat Dynamics Of The Internet

I know this is kind of an unpopular opinion, but I actually really like “Vihm”! I don’t know, I guess it’s not the best song for the ESC (in terms of genre), but I can tell you I actually would vote for it (I’m from Italy).

Rasmus is growing on me, maybe cause the beat and the long frases scream “Ewert!” (the beat is very E&T2D, I might be a bit biased). But I have no idea if Eurovision would love it or hate it. I think Spirit Animal is nowhere near the best from Kerli. and I don´t see many people voting for it. She is seen too much like a weirdo by many folks here, the comments about her style are more towards the judging and negative. It is too bizarre and out of the box for estonians. I myself am pretty indifferent, it… Read more »

Here’s a new video of Angeelia performing “We Ride With Our Flow” live: https://youtu.be/TYZM_LY6iPU

Y’all forgeting that:
1. 90% of Eurovision songs sound way better performed live, because of specific huge arena acoustics and more natural vocals
2. Kerli’s going to deliver such a stage performance and costumes most of you will be just jaw-dropping and realizing she’s leaving the strongest impression and probably winning the Eesti Laul.

Mmm, vote for Keep running, it’s radio song tho.. People are voting for Kerli only because she is Kerli, she have had better songs out there.. I don’t like that song at all. Ears start hurt if I have to listen it more than 2 times row, haha. It can win easily with good show but nah.. Lets see. I like Carl-Philip personally from semi final 1.But we should wait until live, then we will see who is the best lol.

KERLI!!!
Estonia needs to send Kerli, and I think she (finally) deserves it.
The song is pretty dope and I don’t doubt she would execute awesome visuals and performance as well, like she always does.

I think Estonians will most likely vote for our more domestically popular artists like Elima Born (with a song written by our biggest song writer Stig Rästa) and Lenna rather than Kerli, although we may see her as our most famous worldwide singer and vote for her purely on that rather than her song (which I love still), I think Ariadne is also a dark horse as the track has something which gives an Estonian feel. Laura and Koit are both big stars also and a lot of Estonians would also vote for fame rather than the song but I… Read more »

This semi brought me all I wanted from EL. These are Vihm, WRWOF, and Spirits, pardon me, from Kerli. The last one has got joyfull charge, repetitive but poisonous and memorable almost-big-room chorus so it’s not much locked in it’s own perspective and sense so you can imagine a lot about how can it be staged, regardless of this year staging flop from estonians 😉 And the other two just won my heart. Though both are pretty specific, same time they’ve got own strengths. Antsud did awesome job that can both chill or cheer you depending on your mood. Still,… Read more »

Come on people, Kerli isn’t that famous in Estonia. I mean yes people know who she is, but they mainly listen to other artists. She’s not even here most of the time. She has some serious fans abroad, but in Estonia people just hoped that maybe she could write an awesome song since she’s experienced. Don’t get me wrong – I like her alot, but I just don’t get it when people say she’s like uber famous in Estonia and that’s why everybody like her song. Nah. Lots of these artists at Eesti Laul top Kerli in Estonia when it… Read more »

James I’m so impressed you know better then me why I like Kerli’s song so much. Because I’m totally clueless why you love THOSE songs.

@James: The reason they like Kerli’s song are twofold: (1) because its musical and vocal quirkiness sell the song, not to mention the way she arranged the lyrics; and (2) the song screams for a stage performance that will sell it even more. I’m thinking Gwen Stefani meets Björk meets Elnur Hüseynov (“Hour Of The Wolf”).

The only reason people like Kerli’s is because she’s Kerli. It’s painfully average, but her fanqueers will still vote for her.

Vihm is the best by a mile, with Electric second.

Angeelia needs to get the staging right and it’ll be magic but I really am struggling to find the hype with Kerli.

Kerli has to win. She’s amazing!!

Rasmus is my favourite.

I don’t understand why so many of you like Verona, it just awful and so cheesy like Lõhmus songs always are. Kerli is also total dissapointment, since i love her other songs, but this not so much.
I really hope that Angeelia will win our final selection – it’s good and different like all songs written by Andres Kõpper 🙂
Liis and Daniel Levi are also good, but I do not see these as Eurovison material.

Keep Running is the only correct answer, but Spirit Animal isn’t wrong either. The rest? No thanks.
Surprised by the love for Verona… that song is SO awkward!

This an amazing series of songs. Well produced, andof corse, I prefer those with an alternative vibe… My favs: KERLI – Brutal; different; With the right and amazing stage, as she usually can put, will be the winner (go against Elena ) – my issue is that – take the autotune please… Antsud – THIS IS GOOOOOOOD. . This can be a dark horse at Kyyyv like as been Jamala Rasmus Randvee – Strong vibe, Strong voice; the percussion is great Angeelia – The end is BIIIIIG. I like the atmosfere Alvistar Funk – The Rithm The Rithm The Rithm… Read more »

@CharlieCHan
Keep Running and Vihm are the only songs in this semi that would even come close to winding up on my playlist. The whole thing is just lackluster

I don’t get the hype around Spirit Animal, the song is weird and her voice is weird it’s just a big no for me

@Chance Well, you must be confused because I am not ashamed of liking Kerli’s song. By the way, who do you like. It’s not that I want to know it, it’s more that maybe you like a song other people don’t like, and not because of that we are talking trash about artists and the other people’s tastes. For example: Do I like Verona? No. Do I mind other people liking Verona, even though I dislike it? No. Hope you learnt a valuable lesson from a 15 year old. 😉

Amazing semi, I’m obsessed with Spirit Animal and Verona. They are currently my favorite NF songs. Kerli is ESC winning material if the show is right.

I don’t care. That song is an abomination and people should be ashamed for liking it.

This is such a strong Semi Final that I actually voted for FIVE songs!! “Verona” is a great song, but I also really like “Vihm” and “We ride with our flow” – just because I like folky and arty sounds. 🙂 “Keep running” and “Electric” both have really grown on me with time, so they were my other two votes. “Spirit Animal” is okay, but it has this awful drone noise in the background of the Chorus, and that makes it unpallatable to listen to. I know that Kerli is a very accomplished artist, but that sound problem really needs… Read more »

1. Koit Toome and Laura (for Round 2 and the overall win)
2. Kerli (this song literally begs for a wild stage performance)
3. Almost Natural
4. Liis Lemsalu
5. Daniel Levi

@Chance Thank you for giving your oppinion but I ask you to be kind with other people even they don’t agree with you.;)

This semi-final is really weak. I voted for Koit Toome & Laura and Antsud. Kerli’s song is a grower, but I’m still not a big fan.

DANIEL LEVI – ALL I NEED NOW ON YOUTUBE : https://www.youtube.com/watch?v=winLpT8zELY

Unfortunately Kerli’s staging MIGHT put off the casual viewers.

But i like that trash produced by Kerli, kinda hate it at first but it’s definitely a grower

we ride with our flow <3

I gotta say, I’m going with Elina with In or Out for the win for Estonia

The best song is “We ride with our flow”!! It is kind of weird song, with that mystical sound! very trendy. If you want to send to ESC something different, that’s the best option

Kerli’s song is trash and you’re all terrible people for voting for it.

Verona is probably the best song of the whole selection. Great tune.

everyone seems to love verona. i like it, but it’s really cheesy!