Since the December 20 announcement that LeKlein, Javián and Fruela had made the wildcard final, we’ve been running a poll to determine your favourite to win and compete in Objetivo Eurovision — Spain’s national final for Eurovision 2017.

As of January 5 at 13:00 GMT, our readers have cast a total of 1,539 votes. At the moment LeKlein — that’s Vanesa to friends and family — holds a narrow lead over mature rocker Javián.

LeKlein has racked up 662 votes — or around 43% of all those cast — with her contemporary number “Ouch!” Many of our readers are going wild over her androgynous look, raspy vocals and the fire in her eyes.

Writing in the comments section of our original post, CandyCam said: “Guys… kill me if I’m wrong but the attitude and live performance of LeKlein are lethal (check her live performances in Ibiza) and Ouch!! sung by her is meaningful and real.”

And while she has lots of fans, there are some naysayers throwing shade in our comments section, particularly when it comes to building the song around an unattractive phrase denoting pain.

Eye-liner wearing heartthrob Javián remains a close second with his song “No somos héroes”. He currently trails LeKlein by just 55 votes, making this an incredibly close race to the top.

Fruela finds himself in a distant third with just 270 votes — or 18% of all those cast.

That’s the way the wind blows at the moment. What do you think will actually happen in the Eurocasting final? Is this a too-close-to-call race between LeKlein and Javiàn? Could Fruela surprise and slay the favourites now that he has added Spanish to his song? Let us know in the comments box below.

And don’t forget: You can still vote in our poll. 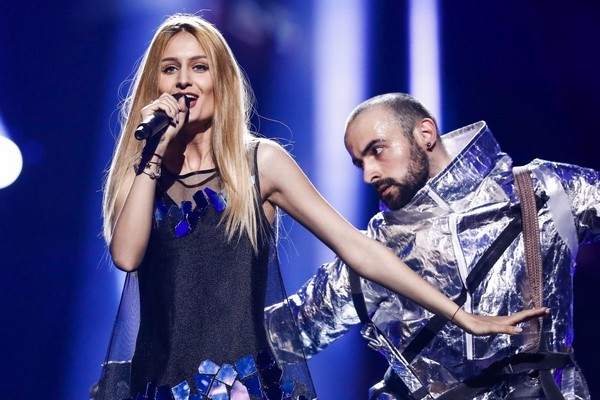 BREQUETTE was the best. If she won, Spain would be my 1st and would get 20 votes from me 100% sure…. I cried when she didnt got chosen.

LeKlein was the best of all of the entries. Nothing has changed my mind, yet.
Javián’s is good, too though!

The Fruela song is pretty bad. How is it in the final three?

There’s a bit of a fanwank over LeKlein…voice is good, but the song is annoying in parts as noted by Spanish Wiwibloggers. It really wouldn’t stand out much in Kyiv. Personally, I think Javian stands the best chance because of his music, not despite it. Go Javian!

Ouch!! is the best produced song. This year I’m sure will get a good place. OUCH!

I don’t want to upset anybody, but in my humble opinion, Javian is the best of the three, or maybe a wild card, but if Spain will sent that ”Ouch!” or ”Live it up” I can here again complaints about how Spain is robbed because is in Big 5 or any other reason.
Don’t be afraid of country music, look at The Netherlands, they did well twice with country songs.
De todos modos le deseo todo lo mejor a Espana !

Javian is my favourite. I love his song. 🙂
About LeKlein’s “Ouch!”..- There is just nothing that like about it. It’s too cheesy. She is a good singer though.

LeKlein is so powerful, looking forward to see her live performance next week 🙂

Such a stupid song! OUCH…

Still can’t get over Brequette, sorry

Javian is the best by far, think about Spain’s recent history in ESC and then tell if anybody will remember LeKlein or Fruela during the voting time. I remember last year this time, when everybody were saying that Barei has unforgetable song … and in the end … Europe forget to vote her.