We’re nearly done with our journey through Switzerland. But today the Wiwi Jury — our in-house panel of music unprofessionals — keeps on moving to the sound of Shana Pearson and her dance number “Exodus“. Can the Swiss-American singer slay her way through Die Entscheidungsshow and on to Eurovision 2017 in Kyiv? Read on to find out…

French readers may recognise Shana from her hit song “Distress”, which she performed alongside DJ Big Ali. The song was a chart mainstay through the summer of 2011. That’s not Shana’s only success though. Her first album “Regarde-moi” went Gold in Switzerland in 2009. Songs from her EP “Fearless” were even played at New York Fashion Week. International realness all over!

Antranig: I’m going to be blunt — “Exodus” needs a completely new chorus. The current one does not fit with the incredible verses. Vocally, Shana is on point. The interpretive dancers are beautiful and I would love to see that on a Eurovision stage. In reality, the only negative here is the chorus. But in its current state, that is a huge negative.

Anthony: Flashbacks to Hannah Mancini in Malmö springs to mind. Promising build-up, hit the first chorus — then it all goes downhill. From one American ex-pat to another, the Live Check performance felt like raving in a nightclub with a massive hangover. Shana couldn’t have picked a more appropriate title, unless she turns things around in the final.

Florian: If you’ve listened to her back catalogue, then you should know that Shana has a fierce personality. In that sense “Exodus” fits her style very well. Unfortunately there’s just too much going on in this song, resulting in a complete mess. The chorus is out of place, leading to an unfortunate drop at the beginning of the second verse. Not clever. The backing vocalists don’t really support her either. Ultimately, this song is rather cheap and dated. 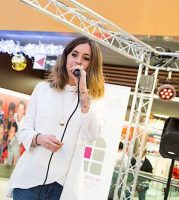 Edd: This is one of those really annoying songs that is perfectly produced, building up to a big old euphoric bass drop — which never arrives. WHY build up so much hype in the chorus if you’re only going to plop back down to the verses with no funky treat in between!? This is the audio equivalent of when you excitedly grab the last chocolate bar from the cupboard, only to find out that it is just an empty wrapper. Heartbreaking.

William: The beginning sounds so mysterious, fresh and on-trend. And then those appalling harmonies come in — as jarring as an electric guitar in an orchestra. But there is hope. She could salvage this by removing the final two minutes and thirty seconds, coming up with a stronger chorus and getting backing vocalists who can actually blend with her.

Jason: First of all, I think we can all agree that “Exodus” suffers from an awful chorus. Like, really awful. The track starts well, giving us atmosphere and seeming to build to something amazing. And then…nothing. I would say that it leaves me wanting a little something extra, but I don’t think that an entirely new chorus counts as something “little”.

Chris: Obviously there were vocal issues with harmonies and the like at the live check. I’d expect that to be fully worked out by SRF and Shana by the final, though. The verses are stronger than the chorus as it stands, but I’m fighting to see potential. Shana is a well versed performer who has performed worldwide — bring something big for the final and there’s potential for a revamp to really help here.

Robyn: Dammit. “Exodus” has such a promising start, all moody and cool. Then the chorus comes along and suddenly the song transforms into a cheap club track from 2010. The dominant mix of the backing vocalists doesn’t help, making them sound like an underrehearsed, droning school choir. It’s really unpleasant to listen to. There is a possibility that the vocals will sound better at the national final, but even still, that chorus just isn’t good enough. LISTEN: M I H A I releases power ballad “I Won’t Surrender”

Wow, I totally agree with the Wiwi Jury! Promising verse followed by the world’s worst chorus. This is awful even by Switzerland standards. Say what you want about the UK entries – and Lordi knows I have – but at least their songwriters have a basic idea of what they’re doing. This is just pure amateur hour.

I really like Shana herself as a singer, but the song has a lot of problems. Also the choreography makes it look like a fat-burning workout video!! 😀
I’d be surprised if this wins in Switzerland.

I start losing my hope with Switzerland. All songs seem of the same quality. There is neither a great one nor a rubish song. Mediocrity everywhere. About the song, it starts well, I think I’m going to listen to sth good at the chorus and then dissapointment.

An okay song, but she needs to do a bit of a revamp and ditch those backing singers from the live check. Still better than Freschta, Nadya and Michèle though

I’m with you, it starts very promising, but after that everything is a mess.

This song is badly written and horribly structured. It really gives you high hopes at the beginning, but when the chorus kicks in, whew, you just want to turn it off like bye af

Come on, Nadya’s song is so much better than this! The verses are good, but the chorus… OMG, it’s so bad… Her voice annoys me.

There is *something* that is cool and exotic about this song, and yet, there is something that makes it seam messy and unfinished. I guess that it goes to the upper half of Swiss NF entries, but a middle tier song is still a middle tier song. At least I can remember the messy chorus afterwards.

Unpopular opinion here: this is my favourite song of the line-up, even with the sudden changes from the chorus to the verse. 8/10