Our Wiwi Jury is still living the life in Riga, as our look at Supernova 2017 continues. With the second semi final coming up on Sunday, we’re getting close to the end of our trip. Sad face! But don’t worry — we have another three acts to talk about right now!

Our reviews this time focus on The Ludvig, The HiQ and Toms Kalderauskis. Will any of them be able to overtake UP at the top of our rankings?

Chris: I don’t understand why someone like The Ludvig, with so many American listeners, would want to do Supernova 2017. But maybe that’s a story for another time. “I’m In Love With You” is perfectly fine, it’s enjoyable for the first couple of minutes, but then it goes nowhere after the bridge. The music gets grating by this point too.

Robyn: “I’m in Love with You” is a lovely song, but it’s let down by the noisy, cheesy repetitive synths that come in at various parts of the song. Things are better when Ludvig is allowed to shine, with the music supporting — not dominating — his vocals. But when those synths come along, it’s hard to keep listening.

Jason: Ludvig has a voice like silky smooth chocolate and “I’m in Love With You” sets the scene for seduction. The track almost works, but as the rest of Team Wiwi have picked up on, those cheap synths need polishing. After a few listens they are not as grating, but the casual Eurovision viewer will only have one listen. Ludvig, do not let us down!

Josh: I’m getting a little tired of all these electro-ballad’s in all the national finals this year. Whilst I can appreciate Ludvig’s smooth vocal, the instrumental accompaniment bores me. If an acts wants to win a national final, they have to pick a unique sound that makes them stand out. This sounds like every hipster electro song ever. No thanks.

Luis: Ludvig’s voice is delicious. His vocals mix sweetness and vulnerability with sultriness perfectly. Shame his synths aren’t as well polished. Nothing that a bit of a rework can’t solve, but as it stands now, those cheap electronic sounds are dragging me out of the song completely.

Andy: This song is the epitome of a nerdy boy’s slow jam before a pretty lady arrives at his shag pad for the first time. It’s like watching an awkward teenager trying to kiss for the first time. The velvety quality of Ludvig’s voice is lost every time he fails to hit one of the high notes. I don’t know how he is going to manage to perform this live. I appreciate the sentiment and Ludvig’s individuality, but it’s a mess.

Chris: For the genre it’s going for, “Taju Ot Lyubvi” does it quite well. But I feel like I need a bit more added drama — or perhaps the language barrier is a bit too much for me here. There’s just something missing that means I don’t connect with it enough to really enjoy the song.

Robyn: Well, hey, if Russia have given up sending songs in Russian, why shouldn’t Latvia give it a go? “Taju Ot Lyubvi” is a nice piece of alt rock. It’s not quite at the point where the music transcends the lyrics, but it comes close with the cool, moody sound. I would at least like to see this make it to the Supernova semi-final, if not the final.

Jason: “Taju Ot Lyubvi” is strangely compelling. Although I’ve absolutely no idea what is being said, I feel like I’m being drawn into a dreamworld. The drama and emotion conveyed here transcend the barriers of language, and even though this is not my usual cup of tea, I like it. I would love to see The HiQ make it to the final.

Zakaria: It’s always refreshing to hear songs in any language other than English. Not only that, but this one proves to be interesting as well, with the singer’s raspy voice a great match for the dark melody of the song. I can’t really see this going to Kyiv as it lacks a hook, or just something that would make it memorable. I really enjoy listening to it at the time, then totally forget what it sounds like after 5 minutes.

Luis: There’s something about this song that keeps me pushing the replay button. It’s melancholic and decadent, but dreamy at the same time. “Tayu Ot Lyubvi” is so well crafted, as all its elements fall into place smoothly — from the slightly raspy voice, to the cello solo. I’m maybe more sold here because I love the sounds of the Russian language, but even leaving the language aside, I’m totally digging this.

Andy: This song is pretty bad ass. It’s like a better produced updated version of “Ljubav je” from Bosnia & Herzegovina last year. The orchestrations aren’t awkward at all and fit beautifully with both his voice and the musical intentions of the song. I was almost expecting a rap interlude — and rarely do I expect rap in a possible Eurovision entry. This song just seems natural.

Before calculating the average score, the highest and lowest scores are dropped. This is to remove outliers and reduce potential bias. We have removed a low of 5.5 and a high of 8.

Toms Kalderauskis — “We Won’t Back Down”

Chris: Electro anthemic rock seems like such a thing that Latvia would get behind, so good for Toms for snatching that genre up. In fact, I might not even mind it if they do — I’m ready to stand side by side with Toms by the end of this! As a concern, his strong accent may make this a bit difficult live. But it comes in with force and holds its own throughout the three minutes.

Robyn: Yep, I’m happy with this. It’s a good rock anthem, with an especially strong chorus. The verses are a little weak lyrically, but once the chorus hits, all is forgiven. I’m also in love with those 1980s-style electro chimes thrown in at the beginning, because why not? This needs to get to the Supernova final.

Jason: Anthemic rock never really floated my boat. I can appreciate all that is good with “We Won’t Back Down”: it is rousing and Toms’ voice really is great. I wish him well in the competition and I am sure he will make it far. I just won’t listen to this ever again. #sorrynotsorry

Kristin: I’m OK with this. There’s something soothing about Toms’ voice and the beat is strong enough to tap your feet and sing along to. Two years ago, there was a song in the Romanian finals called “Save Us” and I completely fell in love with it at the time. “We Won’t Back Down” has a similar effect on me. It makes me want to grab a sign and go protest something.

Antranig: There are some enunciation issues here, but that is the only criticism I have. This is how you do it, Latvia. This is a country that knows how to do rock — Catalepsia were absolutely robbed last year. “We Won’t Back Down” undeniably belongs in a movie soundtrack for that anthemic quality. Does it belong on the Eurovision stage as well? Absolutely.

Luis: “We Won’t Back Down” talks about kings of the world, bringing an anthemic feel in the chorus. He’s living up to what he sings — something not so common! Although the verses are a bit weaker, the song is strong enough to stand out. Toms’ voice is powerful, and it’s perfect for such an epic song. 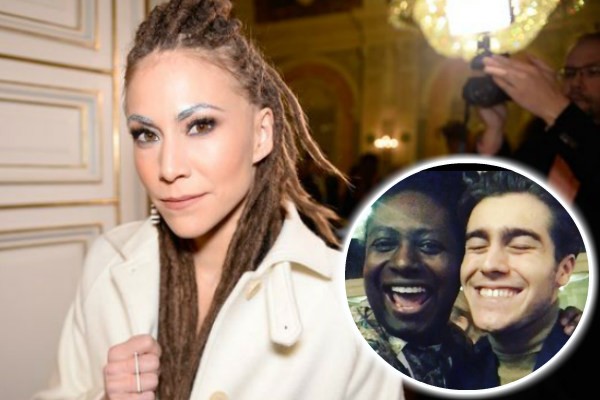 On the scene: The Melodifestivalen 2017 stars get friendly inside Malmö Town Hall

The Ludvig is definitely a really big competitor to Markus and that’s why Polegend Godgarina is trying to smear him here several times. Do you research! It was NEVER reported “he had to buy thousands of fake Spotify streams”.

The Ludvig’s Spotify score should be fully taken away.

I’m surprised with wiwi jury reviews. Not a bad thing, just genuinely surprised. I expected far better reviews fro Ludvig and far worse for Toms. If my info is correct, The Ludvig, being just 16, could be the wild horse of the competition, especially if he manages to deliver the vocals from the video. Toms, on the other hand, more reminds me of a song that you use to go to the bathroom when it’s performed. HiQ has a great song. Couldn’t agree more. But, I don’t think Russian in this political context in Europe, will take this song down,… Read more »

I like all of the three reviewed songs, but “Taju Ot Lyubvi” and “We Won’t Back Down” are probably both in my top 3 in Latvia.

We won’t back down is an interesting song! It’s strong.

“I’m In Love With You” is just boring, “Taju Ot Lyubvi” is not bad but I can’t enjoy it, it’s kind of depressing.

OMG, Toms’ song is amazing! I’m in love with it! Plus, he is very handsome.

I really hope HiQ will get it together and perform the song as they did in one of Latvian tv shows rather than in one of Supernova introductory shows.

Watch them here from 00.57. They performed acoustic version of the song and chello is bringing a whole new dimension to the song and certainly brings up Apocalyptica vibes.
https://m.youtube.com/watch?v=b5L7WQdCqcw

Please, bring in more languages besides English! Why not Russian? I may do wonders in Ukraine. It’s a very similar language and despite their recent political tensions, there are a lot of ethnic Russians in Ukraine.

I’m positively surprised by the high scores of the song in Russian, though! It’s a good nostalgic song but, like most of those Supernova entries, it’s way too repetitive.

I’m in Love with You is everything I wouldn’t want in a song. Lazy production, bored singer with no vocal talent, uninspired songwriting, and undertaker looks in the video. It’s no surprise to me he had to buy thousands of fake Spotify streams, as it was reported a few days ago. I’m surprised at the high scores, for me it’s a solid 0 – only because you can’t go below that.