In a live show tonight, TVR‘s expert jury cut the 72 acts of Romania‘s Selectia Nationala 2017 to 15. The acts were judged based on their live auditions at the end of January. The 15 semi-finalists will now face off on 26 February, when ten songs will advance to the national final on 5 March.

In case you missed Romania’s live auditions, here is a recap of the 72 entries.

Tonight’s show, which stretched over two hours, included guests like Eurovision stars Elena Gheorghe, Cezar “The Voice” Ouatu, Monica Anghel, Marcel Pavel, and Romania’s first representative from 1994, Dan Bittman. They all performed their Eurovision hits as well. They were joined onstage by Luminita Anghel, Paula Seling and Ovi Jacobsen, who were also part of the expert jury, next to songwriters Adrian Romcescu and Andrei Tudor. Along with other TVR hosts, the Eurovision stars presented the 15 semi-finalists in random order.

Who are the 15 semi-finalists of Selectia Nationala 2017?

Ramona Nerra – “Save Me”

The organisers specified that Lora would have qualified with “I Know”, but her withdrawal prompted the jury to select the next act in line, Zanga (“Doua sticle”).

How well did we do with our prediction?

Earlier today, we made a prediction regarding tonight’s outcome. Out of the 15 acts we picked as semi-finalists, we correctly guessed nine. The most surprising omission was Myriam’s “Escape”, written by Ovidiu Anton.

Next up, the 15 selected participants will have to get ready for the semi-final on 26 February in Bucharest, when the expert jury will cut their number to 10 finalists. On the night of the national final of 5 March, the public will decide the winner of Selectia Nationala 2017 by 100% televote. TVR has officially revealed tonight that the National Final will also take place in Bucharest.

What do you think about the 15 semi-finalists of Romania’s Selectia Nationala 2017? Who has more chances of advancing to the NF on 5 March? Sound off below! 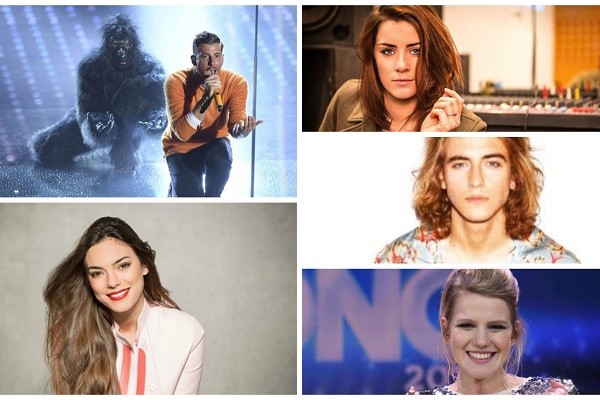 Poll: Who is your favourite Eurovision 2017 Big Five act? I’m very happy to read this. This is the kind of manual that needs to be given and not the accidental misinformation that’s at the other blogs. Appreciate your sharing this best doc.

Ilinca feat.Alex Florea ,magnificent duo ,the song is really fresh ,new style ,their voices ,Jesus, it makes me cry ,both of them are “one of a kind “.It will be lovely to see them at Eurovision in Kiev ,God bless them,all Romanians and Romania

Yodel is unique song with very, very strong character ,both voices are high end quality ,i’am very proud of them .They have to go at Eurovision ! No offence for other singers but their songs is something “Deja vu “

Limitless and yodel it really stand out, but the best songs have been left out. Stephan, philip rushton, lions roar segiu and daniel lazar

That’s a real shame about Teodora. Either song would have been great to put through.

My top 3 (in no particular order):
Ilinca feat. Alex Florea – Yodel It!
Instinct – Petale
Xandra – Walk On By

“Yodel It”, no doubt. Major standout.
And if it’s not chosen, please let it at least be “Petale”.

After taking a look at the songs, I have noticed most songs sound dated. I mean, a decade ago some of them could have been a good Romanian entry. But we are in 2017! In the final I’d like to see Cristina Vasiu – “Set The Skies On Fire”, Instinct – “Petale” (Petals), Tavi Colen & Emma – “We Own The Night” and M I H A I – “I Won’t Surrender”. However, If you ask me about which one I’d like to see at Eurovision for Romania I’d go with Cristina and Mihai. Their songs are really good and… Read more »

I am in the yodel it camp. It’s a fresh breath of air.

Very disappointed by the omission of We Were Young, ah well.

My personal favourite are as follows “I won’t surrender” by MIHAI is an outstanding song, his vocals at the end was pure magic to the ear’s. He started the song with his nerves and vulnerability and ended the song with sheer strength which showcased his immense vocal range. The song built and built and MIHAI didn’t fail to deliver. My money would be with MIHAI to win just because he is an experienced performer who will bring his performance to life come May. It’s a well written song with a strong male voice. The contest definatly needs more of these… Read more »

The selection was a total mess in my opinion. I’m very surprised that Teodora Dinu and Myriam were not selected (maybe TVR didn’t want any association with Anton’s name, which is very fair-play considering that they are part of the fault Anton didn’t go to Stockholm) considering their really qualitative songs. Also the song “De ce” by Alice and Cezar was a masterpiece, surprised it wasn’t chosen, especially after the live interpretation, which was amazing. I’m not surprised but I’m sad that the Maltese guy, Mikhail didn’t make it, his song was very powerful, sth which would have made a… Read more »

“Yodel-it” took me by surprise – this should probably win.
As somewhat of a musical purist though, I’m a big fan of the dramatic “I won’t surrender” (even if it is MIHAI) – it just ticks every little songwriting box! 🙂
Should be a good final. Romania always delivers a good song (except last year, but that was nothing to do with the music).

@ RB
Is there any song that UK does not make fun of?
That should not discourage romanians to choose Yodel it!
UK will make fun anyway, about anything.

I find “Yodel it!” plain, boring, dated, not real, no power, nothing. The guy’s voice is not that good, either. It is honestly one of those songs that UK would make fun of in their documentaries about ESC.
With this lineup, Romania is probably set to place a little below average, but I can see Yodel it! staying behind in the semifinals.

Where is Sergiu Bolota? “We Were Young” is one of the absolute best songs of the Whole national final season. It is a potential MAJOR pan-European hit! Amazing song. Also – where is Koszika? Her song “Closer” was also amazing. These were among my top 3 favorites of the Whole lot that I had heard… so disappointed now 🙁 At least Yodel It is in… it must win for sure now!!!!

All the songs are cool, I think. Although there were better ones that were left behind… Theses are my favourites:

I honestly hope we don’t send the yodel song, even if only to piss off the wiwi eurofans.

Am I the only one who thinks Yodel it is well, good- but doesn’t have enough punch to make it high into the leaderboards? Well yeah the yodel makes the viewers ‘amazed’ and it will be remembered, but this will get an average placement.

Yodel it for the win.

Yodel It is an outright winner, and has no competition…as far as the other songs go, be it right or wrong, it seems to me the jury have selected the songs on best live performance, rather than the best songs, hence the really good songs …and there were many have not been selected.

To all those haters who attack Yodel it: just try to sing/compose such a song then talk. The girl is the one who was singing at The Voice “Cowboy Sweetheart” and the guy was at The Voice next year after her. They both have great voices, good presence, capable of a great live and van bring a good place for Romania if they go to Kiev. The song is a crazy combination who can entartain young and old people as well. So Gooooo, Yodel it! To Kiev!

Adu-ti aminte or Xandra are probably the most modern options
yodel it? really? was yesterday’s dancing gorilla not enough for you?

My Top 5 from Germany:

What the hell! Always expected We Were Young by Sergiu would definitely fly the flag for Romania cause the song is so good, play it all the time.. missed chance ????

Seems that Stig Rasta write a song for the wrong artist(Sergiu Bolota). He is terrible live.. The song is very good also,but Bolota is terrible..

petale would be my first choice, love it! yodel it would be a good choice aswell

These are literally all terrible

they left out many good songs just to be sure yodel is the winner.. what a shame

Yodel it all the way to Eurovision!

@johanleekens yes, I mentioned it in my prediction post earlier today. 🙂

The yodel chick and the hipster guy.

Yodel It is the trashy bop that we DEMAND every year, and who else but Romania could bring it to us? I can already see that ANTHEM end top 5 in the televote and bottom 5 in the tasteless jury vote. But still, we need that song.

@johanleekens, yes, it’s the same singer. Glad they were chosen.

I have a question:
Is the singer from “Yodel it” the same who auditioned for The Voice Romania with “Cowboy Sweetheart”, I actually found that one on the Internet somehow, is she the same I wonder (because she was amazing)?

As long as “yodel it!” Is true I don’t care about the others