The songs for Eurovision 2017 are coming thick and fast — but thankfully some artists are adding a bit of spice and variety.

And on Tuesday Croatia’s Jaques Houdek — a power vocalist with Pavarotti flair — joined the club by releasing a full instrumental version of his entry “My Friend”, which will be released in its full and final version on March 2.

Beautiful strings and a lovely melody, this instrumental suggests there is plenty of scope for drama on stage.

If one listens really closely, you may find references to other songs — including Faith Hill’s “There You’ll Be” and just a hint of “Let It Go.”

But I definitely don’t want to let this go. In mind mind it’s sounding very good and it’s safe to say that Croatia 2017 is going to be epic.

Naturally the instrumental version differs significantly from the actual song, which Jacques teased on February 24.

The 20-second sneak peek, which you can hear above, roars with energy, its strings drawing you in while simultaneously stirring drama. It balances symphonic with sass and suggests that Jacques will lean Pavarotti while pulling the song firmly into 2017.

Jacques wrote the song along with Siniša Reljic and Tony Malm, and collaborated with Ines Prajo, Arijana Kunštek and Fabrizio Laucella on the lyrics.

“I was developing the idea the whole summer and I’m especially proud of the song and its message of support,” he said in a statement sent to wiwibloggs. “I see it as an anthem that should have a positive influence on anyone who goes through difficult moments in their life because it celebrates life and the fact that every life is a miracle! This is a song of support with a generalized message that can be understood differently by different people, but it also brings us together in the celebration of diversity through its message of love — and love is the only thing that matters.”

What are your thoughts about the instrumental version of “My Friend”? Will this be Croatia’s ticket to the finals? Please let us know in the comments below. 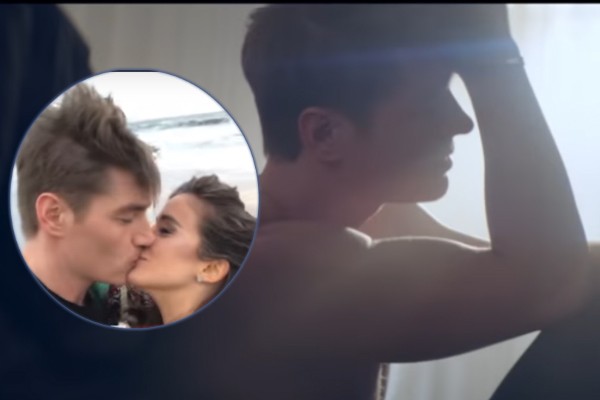 hu 02 Mar, 2017 02:53 I’m already pretty much on the sack, which almost everyone from some drawer thinks of this homophobic convulsion, which is homophobic, etc. Does anyone who is not gay leave the fallen? I think here is about music and not who is homophob or gay, or hetero or pi pa po. Is it his business whether he is otherwise oriented or not. The ESC should be for alla people and not a certain marginal group (not a homophob) is so important with every ESC. As mentioned above, the music should be in the foreground. And the… Read more »

Such a pure emotion and I’d say a glorious ode and hommage to this wonderful and unique song contest. Impeccable! This instrumental itself already has my 12pts and I only wonder whether were witnessing history happening tomorrow once the final version of Croatia’s entry is presented publicly as this could easily become the most complete and spectacular entry ever. Adorable.

His idol is Pavarotti, but some people think he took inspirations from cartoons. Why to care about Disney when you know opera? The bullying against him will be restless. Wish he will win in Kyiv.

And the question was, how do you like this song. My answer is: this is perfection, I had goosebumps all the time. It’s better than our German song. I will vote for Croatia this year

Gosh, this is so good. I cannot stop listening to this. Simply beautiful, and I would say this melody has some tru healing properties. Croatia, you are my top banana this year.

Sorry for My english, i try to explain what i want to say:-) i read about those homophob thing here. I try to find any Artikel in the Internet and i cant find anything about it! In my oppinion its maybe some jealous neighbourhood commending here. Show any link or stop trolling against this artist! Btw I am German

“Macho”… “stepping back 50 years ago” was not a compliment, “macho” has negative connotations to it depending on context and clearly I was not being positive.

Nothing to do with what he looks like, but if you say certain things then you can’t complain when they are brought up!

Last time I played a song dozens of times – literally, all night long and throughout this rainy morning – was when Molitva won the ESC… I loved Molitva and was absolutely sure it had a winning potential. Likewise, the feeling is absolutely the same about “My Friend”… Oh, boy, deep down in my heart I know that Croatia is already winning the ESC2017 with this ‘cus this is not only stunningly perfect, but the strings and the overall emotion that this instrumental conveys simply make me cry with joy and an inner harmony that I feel while listening to this masterpiece. Oh, God… Read more »

Senegal is the one really sick pearson, think what you want, but you are costantly speadig hatred and lies, that is sarcastic becuse you ocuse Jaucqes for that, but there is no evidence that I saw. Even if he thinks different than you is that justifide to spead hatred, admins I am dissapointed that you allow this kind of comments, that is very sad and no longer song contest discusion..

You just made women to want to invade Croatia during the summer. And Jaques must stop to please LGBT, they will never forgive him because he doesn’t look good shirtless. This is the sad truth. If he is asked, hes answers to be minimal, but no word more. Good luck Jaques, win the glass microphone.

Thank you Carlos for pointing it out ????

OK valid points…but this isn’t a homophobic country forum….this is about a song and a song contest.
If we want to discuss homophobia in certain EU countries this is not the place.
Please can we just comment on the entry into a SONG contest.

I’m British but I’m half Croatian, I got to Dubrovnik every summer, have family and friends there and absolutely love it, however there is no denying that Croatians I have found to be very homophobic, Croatian men are very “macho” it’s like walking back 50 years ago. Sorry but true.

Guys, please stop be so rude!
He’s not homophobic, his words were misunderstood – and then media puts too big pressure on him. Houndred of times he denies any accusations about homophobia, and he said that many of his friends and business associates are members of the LGBT minority and he have no problem with that.

And for those who said that Croatia is homophobic country, chech this list – we have on of the best rights from LGBT people in Europe!
https://rainbow-europe.org/country-ranking

The instrumental version of the song alone could probably be Top 10 this year. This should be really good. I’m happy to have been wrong before – this could be a really good entry!

This will be good…

Look at these id*ots… This is music competition, hello!?!? Who cares what he thinks about others, many people don’t like me and I don’t care. Stop behaving like you are the center of the world (LGBT community and its supporters). I am sick of you!

@monique…
Care to share these “homophobic tweets”??
I don’t believe there are any or ever have been??
If you don’t like Jacques for whatever reason, that’s fine. We are here to comment on a SONG contest. Too much rubbish has been allowed on these forums. Please comment on the songs. Peace

Everyone who says he is homophobic just want attention, especially this guy ‘Senegal’ lmao.

@Sandro Lerner…
I couldn’t agree more!
The comments about homophobia have been done. Please let’s just concentrate on the song contest. Comment on the song please. It’s getting so boring now.

@Monique & other people who deliberately spread vicious comments and lies about Jacques – PLEASE, STOP IT! This should be all about music and love, not about hatred and jealousy. I can’t escape the feeling that this is onluy one arrogant person with dozens of different alter egos who’s very dedicated in distorting the truth. Please, stop it and let us enjoy the music ‘cus we’re fed up with your comments and the likes. Jacques has an awesome song.

Such a flop! I hate the singer and his homophobic tweets, he’s such a disgrace….

Wow, this one surely has “THE WINNER” written all over it… can’t wait to hear how it’ll sound on Thursday. So far so good! It’d be good to see the ESC coming back to Croatia after so many years, having the Pula Arena as an awesome outdoor venue by the sea?! Just an idea… 🙂

Such a disappointment from the drag queen Jacqueline … Old fashioned and boring! Last place in the Semifinal for Croatia this year, and well deserved. The homophobic singer will get what he deserved!

I’m from Croatia but this is so old fashioned and really boring. No final for us this year.

Sound different. Love classical music but this one has modern twist to it. With his amazing vocals this could do really well with jury.

it’s going to be really campy isn’t it ughhhh

Ugh I’m very hyped for this! I can feel it’ll be great.

I know it early, but we have a potential winner here…. Kudos to Croatia. This is stunning.

Wooow! What a melody! With his voice this will sound amazing! (apparently he’s a voice powerhouse)

I really like it, but let’s wait for the full package.

Hmm, not sure if I’m going to like this.

BTW, a 30sec snippet of the Cypriot entry “Gravity” was released!
https://youtu.be/DvJCcil0H5U
Check it out!

I imagine an amazing performance when I listen to this instrumental version! I assume the full version will have more energy! I really like it!

Melodi reminds me of Tonci Hujic songs for group famous instrumental group Bond and Tonci song for Croatia at Eurovision 2001 Strings of heart and 1995 Magazin Nostalgija and plus song from Frozen Let it go sang by Dani Lovato.
Slovenia send similar sound song in 2009 and they stay in semi.

Absolutely LOVE IT!!!
In thursday he will share full version! Can’t wait to hear it!

One word to describe this song once its fully released: ANNOYING!!!

Loving this! Apparently the radio edit is even better! Can’t wait to hear it.