They’re the Swedish boyband who have already opened for Justin Bieber and performed to sold-out crowds at Friends Arena. But FO&O — that’s Oscar Enestad, Omar Rudberg and Felix Sandman — know that Melodifestivalen is a whole other beast.

“We don’t take anything for granted and anything can happen in these kinds of competitions,” Felix tells me. “That’s something we really want to say when people say stuff like, ‘we are going to the final.'”

Hi Angus! Thanks for making this interview with us!

You wrote your song with South African record producer and songwriter Robert John “Mutt” Lange, who has worked with the likes of Lady Gaga, Muse and Shania Twain. Did you meet him and did he know what Melodifestivalen was beforehand?

Oscar: We didn’t write it with him. He wrote it with our producer Tony Nilsson and first it was a single for One Direction. Then he decided to give it to us. We were super happy about that. We haven’t met him yet unfortunately. We have mail contact and communicate that way.

Felix: He’s living in Bahamas. He’s neighbours with Mick Jagger. We are looking forward to meeting him sometime. Maybe go to his house in Bahamas, that would be fun.

Omar: And yes: He knew about Melodifestivalen.

You opened for Justin Bieber in 2013. What was that experience like?

Oscar: That was a magical experience and was one of the scariest experiences we ever had.

Felix: It was a very crucial moment for us to start off our career like that and it was a really good start. We are very thankful for that.

Do you think that performing at arenas has prepared you for Melodifestivalen?

Oscar: Absolutely! Both arenas and TV shows. We have done a lot of TV shows. I mean you’re getting use to the stage, the camera settings and how to handle the audience. So, of course, that’s a good thing.

Why did you decide to enter Melodifestivalen this year?

Oscar: Because we are super excited about it. It’s a really nice and good platform to develop our music in. We just want to be there and share it with lots of people.

Felix: And we have been really busy in the past years. We did a lot of stuff. That’s basically why we feel like now is the right time. So now we are doing it and we are really excited about it!

You’ve been drawn against De Vet Du for your Andra Chansen duel. How do you feel about competing against them?

Omar: We are super nervous. We really want to go to the final. But we will see what is going to happen. But let’s hope and pray for us.

Felix: We both have a lot of fans. I think it’s all about the Swedish people. The people who are voting. Hopefully they will like our song, what we do and vote for us, but De Vet Du is very funny. And they have a catchy song and a funny performance. It’s nice to watch. We will see what will happen in this duel.

When you recorded the song were you going for a boyband sound?

Omar: But we didn’t go for a boyband song really. When we record songs, we always record them because we just want to try them out and see how they would sound like with our voices. And after we recorded it, we felt like it was a really “boybandish” song.

You’re hugely popular in Sweden, but didn’t go direct to the final. Why do you think that is?

Felix: It’s a hard question to answer, but I think it’s more about what people are thinking. People thought that we already would go straight to the final. That we already had all the votes we needed, from our fans. And that’s not the thing, because we need the people too. That’s why we are here. To reach out to everyone. That’s something we really want to say when people say stuff like, ‘we are going to the final.’ We don’t take anything for granted and anything can happen in these kinds of competitions.

Will you change any of your performance for Andra Chansen?

Oscar: Yes, we will change a little bit of the choreography and the camera angles. Then we will change the big moment when we are going up in the sky with the elevator. That will be gone. We will focus more on the ground performance.

Omar: More on us and not on the lifting part.

Felix: We will erase the flying part. We got so much feedback that people wanted us to show more of our faces, and look in to the camera more.

Oscar: And show us more, instead of the technology.

Felix: More identity, and that’s what we’re putting in there. We got the choreography, the song and now it will be more identity and an opportunity to show ourselves. And really reach out to everyone through the television. That’s basically what we are going to do. 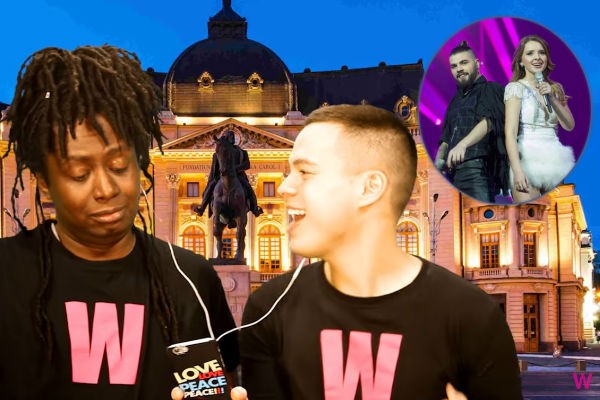 Yodel it? We watched Romania’s Selectia Nationala 2017 finalists and filmed our reaction The positive news from this interview: The change in staging. That raised platform gimmick didn’t work at all in the heat, so I’m glad that it’s being dropped from Andra Chansen. The negative news: Oscar’s musical opinion. He said: “Without the boyband sound it wouldn’t be the same song. The boyband sound makes the song so much better.” That is debatable on so many levels! I just want to re-arrange the song for piano and soloist and demonstrate to him myself why the “boyband sound” is not better for this song. It’s a musical opinion I know, and we can… Read more »

”South African record producer and songwriter Robert John “Mutt” Lange, who has worked with the likes of Lady Gaga, Muse and Shania Twain.”

Swedish band without swedish song writers. Look Europe it is possible!
Can’t believe I’ve read the whole article and I still don’t know who is who.
They are so cheesy, but I guess I want them to win because I want DJ Hunk from De Vet Du not become sick for not wearing clothes.