They unveiled their Eurovision 2017 song “Lights And Shadows” through a Facebook live broadcast on Friday morning, drawing endless comparisons to Wilson Phillips.

And by Friday evening The Netherlands’ O’G3NE were already on the promo trail, hoping to prove that they aren’t the next incarnation of the 90s American singing group, but instead the first and only incarnation of O’G3NE.

They did so by making a high-profile appearance on popular Dutch talk show RTL Late Night, where they wowed the show’s panel of guests and viewers at home with their pitch perfect harmonies.

Say what you like, but Lisa, Amy and Shelley were born to slay.

Where some acts arrive at Eurovision as amateurs, these girls are already professionals. Starting out in shades of blue, the sisters had lyrics of the song projected across them and brought the whole piece together with killer harmonies.

The strongest segment by far is the middle 8, as the group whip out the stadium hand-clip and synchronised finger-wagging to full effect.

This performance really showed OG’3NE’s key selling point: Their voices. And when you have voices like that, you don’t need a pyro-shower or LED screen behind you.

You’ve been asking us on our YouTube channel to react to OG’3NE, so wiwibloggers William and Chris sat down with wiwibloggs’ Dutch correspondent Denise to air their thoughts on the sisters and how “Lights And Shadows” will do at Eurovision.

In their minds the live performance really helped elevate their opinion of the song, which perhaps sounds a bit too tuned-to-perfection in the official music video. It’s with the girls’ live voices that the emotion and power really come through.

The sisters go into battle for the Netherlands on May 11 during Semi-Final 2. Drawn in the first half, “Lights And Shadows” will be up against stiff competition from regular qualifiers Hungary, Romania, Russia, Estonia and Lithuania.

Last year, Douwe Bob cruised into the final with his Nashville-tinged track “Slow Down” and brought Stockholm to a standstill with a ten-second silence during his performance. The silence didn’t do him any harm, however: He cruised to the grand final from his semi and placed 11th overall at the final of Eurovision 2016.

What do you make of the live performance? Has it elevated “Lights And Shadows” or do you think the Netherlands are out of the race? Let us know in the comments below!

GET ALL THE LATEST NETHERLANDS NEWS HERE 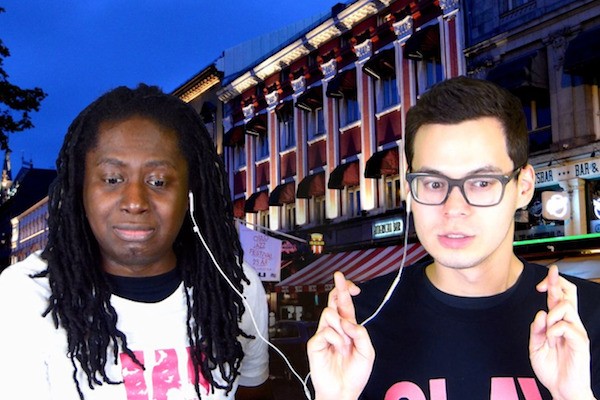 Norway: We listened to the Melodi Grand Prix 2017 finalists and filmed our reaction

Hi, Neat post. There’s a problem together with your web site in web explorer, may check this¡K IE nonetheless is the market leader and a huge element of people will miss your fantastic writing due to this problem.

@Vladimir P. definitely agree, this is giving me strong Wilson Philips feels. They should have gone the route of “The Dream is Still Alive” as that is one of WP’s stronger songs. I don’t hate it, but i’m still on the fence with this. I’ll revisit this once all the songs are released

@VladimirP spot on whenever i hear this i think

It does sound good live though. I think they are better than the song.

Amazing voices for sure!! Maybe the best vocalitst for this year but… that is not enough, new song is not impressive, there is nothing special. I think they will make the top 10 though

The song is meh, but I don’t remember when was the last time we had so excellent singers in Eurovision. This is by far the entry closest to vocal perfection in Eurovision. The girls are extremely talented, but I belive talent is nothing without tons of work, and I am sure they spend hours, maybe days, in practicing singing and singing their ESC entry in particular. Bravi, OG3NE!

Here is another “Live” performance. They are amazing, “Live” is so much better and covincing than the studio version, Dark Horse alert! https://www.youtube.com/watch?v=4sn-f944vAw

The live performance is just so good, wow! How can they sound so perfect???? Really, this is not easy to sing like that and if one of them them f*cks it up, they’re dead lol. I have to admit the live version really elevates this song from nice to good. I have a feeling this will be a darkhorse!

The sound on this show is usually terrible, and this time was no exception. There are a few other live performances on Youtube which are better.

It’s not a strong song, but purely on the basis of their vocals this belongs in the final. I think most people feel like that, from the reactions I’ve seen. The song is just overambitious and badly produced, but they do know how to sell it.

Their image and music remind me of Wilson Philips.

If they can bring just a touch more attitude to that middle 8, they’ve got themselves a qualifier. I felt like the middle one’s mic was a little too soft during the verses, though. I don’t mind that they sound exactly like their studio version cause I thought the harmonies were *crazy* tight—not even a sheet of paper could fit between the three of them. I don’t think they’ll overtake Afrodite as the most successful girl trio, but they may fare better than the last few that have tried, like Serbia 2013 or Croatia 2010 (which I both loved as… Read more »

@Candy: See my comment below. Wilson Phillips got their start late in 1989.

i can’t feel the song at all. it has too much vocal acrobatics. it doesn’t sound too sincere.

Without doubt, great vocals and great harmonies, but the song sounds so cheap and soulless that it makes me cringe. It’s like the 2000s girl groups, but ten times more artificial.

I actually really like this song anyhow. It has real meaning to me, as my own Mother has lived through cancer. The singers are excellent all round – I will be very surprised if this doesn’t qualify from the Semi Final.

I was a fan of this song from the initial release. The harmony gives me life! Right now they’re around 5th or 6th for me, overall, with 29 songs out. I really want to see them qualify.

I’m not really convinced by this song. It’s not memorable and its only goal seems to be to highlight their harmonies. I wonder how they will stage it – it needs to be a lot fresher than this! Those girls are in their early twenties but somehow it seems as if they want to disguise it and look like 50 years old. To me the whole song and presentation almost seems a bit creepy, even though their voiced are strong.

Their vocals are amazing, but I don’t feel any emotion from them.

I have a feeling they are gonna do great.. their vocals really elevates the song, still the song itself is great too.. Love it!

Their live voices help, of course! But when the song is so weak, boring and dated, a good voice doesnt help much. It’s still 28 in my top so far before Croatia and Romania, which I cant even listen to.

I prefer the live version, it’s more tender. The harmonies give you more chills.

It didn’t change my mind at all.
I knew they would sound awesome live and I really liked the song even before hearing the live version.
Go Go Go Holland

Yes, quite simply. And thank you for sharing 🙂 Anyone who thinks this won’t do well live is kidding themselves — the song and performance will have a wide appeal. It is Disney on steroids. Everyone is competing to 2016 great dance hits but this year the quality is also there it’s just a different type of songs. In 2017 people donned uplifting. Eurovision provides a great example everyone coming together for love and peace (indeed), so this song is perfect in that theme. Belgium and Netherlands might be called the Low Countries but, girl, at ESC 2017 they are… Read more »

dude let’s admit it. This is exactly the kind of song that makes us wonder, ”How did it end up top 5?”, because it will.

Let’s put some light into our lives
Cause everybody goes through lights and shadows.

I personally love the lyric’s, it’s so up lifting, I get it’s a bit old school, it takes me back to the glory days of En vogue back in the early 90’s and i like this nostalgia. These girls know how to harmonize that is for certain. This is pure gold! There is a market out there for a girl group like O’g3ne, give them the right material and they will slay with their harmonies. I am looking forward to seeing them sing on the big stage in May. I am sure with the right budget with the whole staging… Read more »

Not really, I listened to that performance quite a few days ago and my first thought was “they sound exactly like the studio version”, which would be a good thing for any other song, but not in this case. I was expecting the emotion of the live version to elevate it beyond what it is, but it never happened. We’ll see in Kyiv.

Greath vio es but i want to sleep nos

Eh, the song is still boring to me. Too cheesy and dated.

A good performance, but I realized that the song is very bland and actually boring.

No it didn t
The song is mediorce
Denmark s ballad for example is miles ahead!!

blandness doesn’t disappear with a performance no matter how good the vocals are :/

Their voices are great, but the song is boring and unoriginal. They might just make it to the final, but I dont think they stand much of a chance after that.

They sound perfect. The song is ok.

So, Macedonia, Montenegro, Ireland and San Marino all released tomorrow?????

They have great live vocals, no doubt.

I don’t like the song, but I have to admit that the live performance is really good.