Lithuania’s marathon national selection “Eurovizijos” dainu konkurso nacionaline atranka — or, more simply, Eurovizijos atranka 2017 — is about to reach its conclusion. And thank goodness: We’re not too sure our wi-fi connections can handle another week of crazy.

Shortly after Lithuanian viewers voted to send drag star du jour Gytis Ivanauskas to the final as a wildcard, we asked you which of the seven finalists was your favourite to win.

After counting a total of 1,814 votes, less than 1% separated the top two. But in this cut-throat competition that’s enough to win the day. We can now reveal that Greta Zazza has come out on top by a whisker with 28.72% of the overall votes. Her entry “Like I Love You” earned 521 votes. She also won our Wiwi Jury, making it a clean sweep of the wiwisphere.

Finishing a very close second with 504 votes is Aiste Pilvelyte. Her entry “I’m Like a Wolf” earned 27.78% of the overall vote. After finishing fifth at last year’s final, could 2017 be the year Aiste finally represents Lithuania at the Eurovision Song Contest?

Rounding out the top three is Gytis Ivanauskas. He’s best known for playing the role of the watermelon-smashing drag queen Lolita Zero from the movie Zero 3. Originally eliminated in the second knockout round, his entry “Get Frighten” received 295 votes, or 16% overall.

The final of Eurovizijos atranka 2017 gets underway at 20:00 CET tonight, and you can watch the show live on the LRT website. The winner will be decided by the televoting public and a combination of Lithuanian and international juries. Whoever wins knows they’ll be performing in the second half of the second semi-final at the 2017 Eurovision Song Contest on 11 May.

Are you a fan of Greta Zazza? Do you think she’s the right choice for Lithuania? Shout out your thoughts on the wiwibloggs app, or let us know in the comments section below! 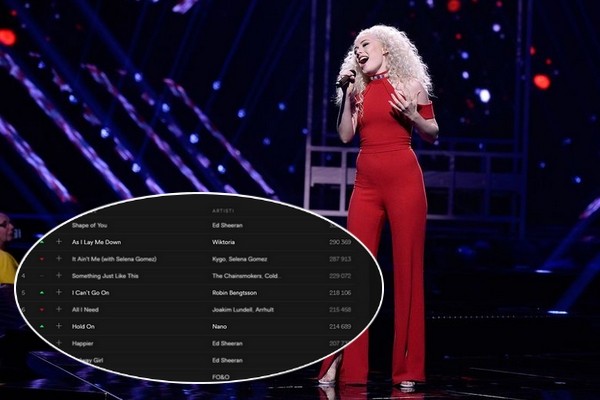 Melodifestivalen 2017: Wiktoria’s “As I Lay Me Down” still leads finalists with Spotify streams I want Greta soo much but if you take a look at the last results i think she will struggle :/

I want Aiste to win but I would be fine wit Greta. I am just a worried that Rain Revolution will win like they didn’t last week!

I’ll try to watch this at least in voting part 🙂

Lolita Zero for the win.

I hope Kotryna is a dark horse

Last year-Justs, this year-Aiste, Aminata seems such a GURU, but then, what she does? She goes to The Voice Russia like any beginner.

Greta all the way! Been blasting her and Paula’s song for weeks now.. love it

Fusedmarc began doing better after Lolita Zero got eliminated. With Lolita back, it may lower Fusedmarc’s votes and no affect Aiste. I think Aiste might win.

Fusedmarc’s song is so unique that I don’t mind if they do win but I’m still Team Aminata.

Lithuania do not have a song that would get them out of the semi finals amongst this selection. It is short on quality.
With that in mind…Lolita Zero might actually give them the best chance. Worrying.

You guys are really underrating kotryna, she was fabulous on her last performance, high chance of winning the selection tbh

Either Aist? or Greta. Both sound like they’d keep Lithuania’s name high after Donny’s great showing.

I agree that Greta’s song is the best but I cant see her winning after coming 6th in the semis…..
Unless there is a different international jury

Aiste best song in national final, but it weird to listen same Aminata song 3 years in row and this song is far from song 2015,2016

Aistè should win!! We need Aminata every year.