From a slice of chocolate cake to a Tolmachevy Sister, two is often better than one. And the same holds true for Eurovision where duets and duos are once again bringing sound, song and some delicious on-stage interaction. As we look to Eurovision the time has come for us to decide which set of singers and instrumentalists does it best by asking you to pick the best duo of Eurovision 2017.

To avoid any misunderstandings, we are defining duo as two people together in an act, regardless of how many people actually sing the song. This is why Norma John and JOWST are included here as well, although technically their songs are not duets. And no, unfortunately Croatia’s duet for one does not count as a duo, as much as we’d love that. Jacques Houdek will compete in our poll for best male artist. In any case, you can vote for the best duo at the bottom of the article.

The folk-pop duo NaviBand (also known as NAVI, NAVIBAND, and so on) will represent Belarus with their song “Historyja majho zyccia” (Story of my life).

The cute and talented duo won the national selection in Belarus with their uplifting and incredibly catchy song back in January. Their repetition of “Hey Hey” becomes a celebration of life and a cry to seize the day. It also looks amazing on a t-shirt and phone case.

As we all know, Koit Toome and Laura previously represented Estonia at Eurovision separately, but this year they joined forces and voices. The result? Their delightfully retro-nostalgic, Modern Talking-flavoured song “Verona”, which won Eesti Laul at the beginning of March.

In addition to their kick-ass voices and lovely song, the pair bring some stirring camera angles that crop their faces tight and create an intimate atmosphere that’s all about the eyes. Bonus points for Laura’s beauty pageant poise and hour-glass silhouette.

You might be forgiven for thinking Norma John is the name of the Finnish singer. But it’s actually the duo formed by singer Leena Tirronen and pianist Lasse Piirainen.

Their dark but utterly beautiful ballad “Blackbird” won the Finnish national selection at the end of January owing to its musicality, Leena’s on-point vocals and staging that featured more than a little smoke.

Norway: JOWST with “Grab The Moment”

JOWST may be the name of one artist — DJ Joakim With Steen — but he will represent Norway at Eurovision together with vocalist Aleksander Walmann.

On March 11, the duo won Norway’s Melodi Grand Prix with their thoroughly contemporary dance number “Grab The Moment”. Bathed in purple light and working a current lounge vibe, they made it clear they’re ready to compete in 2017.

Ilinca feat. Alex Florea is a made-for-Eurovision duo. The two singers only met in January, and in March they won Selectia Nationala with “Yodel It!” — proving that you only need a catchy song and good chemistry to snatch the crown.

He brings hip-hop and R&B flair, while she serves Alpine yodelling skills and undeniable beauty. Together they are serving something we’ve never seen at Eurovision.

San Marino: Valentina Monetta and Jimmie Wilson with “Spirit Of The Night”

Hoping to prove that fourth time’s a charm, Valentina Monetta is representing her beloved country again this year, but this time she has company in the form of American singer Jimmie Wilson.

Disco banger “Spirit Of The Night” is yet another song penned by the legendary Ralph Siegel who, depending on who you are, is a songwriter past his prime or a genius who can’t stop creating magic. Either way, his longevity — and Valentina’s persistence — should be admired.

You can vote for as many acts as you want, but you can only vote once, so make it count! Be sure to tick the box next to each of your favourites before pressing submit.

We will announce the results of the poll in the week leading to the Eurovision Song Contest.

Afterwards, please head to the comments section below and let us know how you voted and why.

YOU CAN VOTE IN ALL OF OUR EUROVISION 2017 POLLS HERE 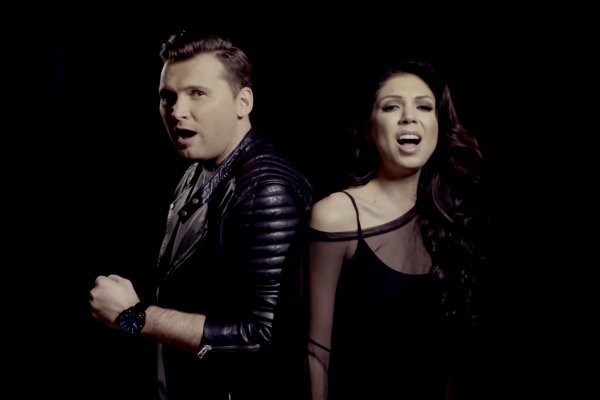 Romania??! Are you kidding? LOL

Romania is the best.

I havent even noticed Blackbird is a duet?

ur a troll i think, i see that in you repeating yourself at every article about them lol

Romanias Song is the worst Song al time in ESC. And she cant sing. Its sooooo fals. O My god

Romania and Estonia the best duo’s, Finland the worst (boring and sleepy)

Finlands best entry ever! Its a blinder!

TeamYodelit for me, second place for me is Estonia’s Koit and Laura

i wish Alex and Ilinca the very best of luck 🙂

Romania is the worst Song EVER. I hope they not coming back to ESC no More. This is a big joke. I be angry when i hear that Song.

Hi there everyone! At the Onde vai o gato? blog, we are currently having our very first edition of a Eurovision Poll. We would really enjoy hearing your voice! Hundreds have done that, so what are YOU waiting for? Share your opinion by voting and commenting on the results. We hope to see you soon at the blog! POLL link–> https://goo.gl/Z2pY5P

Finland is the best<33 such a beautiful and well composed song, almost too good for eurovision

All 5 except Finland, the worst entry of the year. I would use it as a toilet break during the 1st semifinal, hope it will be performing 2nd in the running order. Nothing can save Finland from being stuck in the semifinal….

@ESC Croatia Fan: Egocentric duets are not duets … no matter how many other voices Mr Croatian Kardashian chooses to include in his own mash of Faith Hill’s “There You’ll Be” and the Disney annoying classic “Let It Go”.

Blackbird .. Period! Everything else can go down the toilet for as much as I care …

http://tummiweb.com/scorewiz/poll <– Vote here for your favourities! 😉

It is NORWAY for sure!

My favourite duo are Estonia , followed by Finland then Norway.

Estonia, Romania and San Marino (in that order)

Romania and Belarus, the most entertaining duo… The others, especially Finland are so boring, like…meh….

I voted for Finland and Belarus. Two songs of widely different styles. Love them both. 🙂

Belarus! Then Finland and Estonia. I love Navi’s song, especially the revamp.

Romania, I love them. Especially Ilinca is talented and beautiful

kind of the same with Finland

Estonia and Finland!!
The best!

@Jonny I second that. Belarus and Romania for me 😀 The Songs are so much fun!!

There are all actually really good. But my top 6 would be:
1) Finland
2) Belarus
3) San Marino (Valentina is everything)
4) Norway
5) Romania
6) Estonia

This is just sick, Romanian song doesn’t have so many fans, everyone knows it. Stop cheating, people ._.

Again the user *MoonLight* shared the link and Romanians voted their own song.