They’re a pair of Eurovision veterans who take on the role of star-crossed lovers in their Eurovision 2017 song “Verona”.

And on Saturday Estonia’s Koit Toome & Laura continued to give Shakespeare rhythm with the release of their lyric video, which is much more of a triumph than a tragedy.

Building on the intimate framing they used at Eesti Laul, the duo once again call on close camera crops and backgrounds of solid black and beige to draw attention to their expressions of love, loss and longing.

In a sharp contrast to the Eesti Laul national final, where Laura did her best to channel Miss Universe with her hip-hugging ball gown and perfect coiffe, she styles herself more casually in the lyric video.

Her hair falls in natural waves and she wears a flowing sheer top with asymmetrical neckline, which gives her greater range of movement. Despite looking beautiful, she’s much less concerned with glamour. As anyone who has ever cried into the sink following a break-up knows, pain is best expressed in the comfort of casual wear.

Even with the lyrics visible on screen, however, Laura still seems to mispronounce “bottle in your hands” as “butt on your hands”. It’s a phonetic blunder that takes away from the romance of the opening bars and she’ll want to correct this ahead of Eurovision.

Laura seems better able to emote than Koit, whose expressions at the national final seemed somewhat forced, unnatural and decidedly uncomfortable. However, he appears to have taken note of this and appears more natural this time around, suggesting he’ll reach that visual place of upset with ease by May.

They’re taking a Shakespearean epic and turning it into Eurovision duet dynamite. But before their big win at the Eesti Laul final the duo said they didn’t have a win on their minds.

“I didn’t think we were going to win until the end,” Koit admitted to our media partners and on-the-scene queens from DELFI.ee, Estonia’s largest tabloid, just moments after the show. “The competition this year is tough.”

Laura’s concern was nailing the performance, as she had been fighting illness all week in the run-up to the show: “To be honest I was worried about my voice and condition, and wasn’t really thinking about whether we’d end up second or third or tenth.”

The singers’ draw in the running order had raised concerns about their chances of success and during the jury voting those concerns looked justified. Koit & Laura only managed to place fifth with the jury, but pulled it back in televoting, and went on to storm the superfinal, knocking Kerli and Rasmus Rändvee out in the process.

KEEP UP TO DATE WITH ALL OUR LATEST ESTONIA NEWS POLL: Who is your favourite duo at Eurovision 2017? 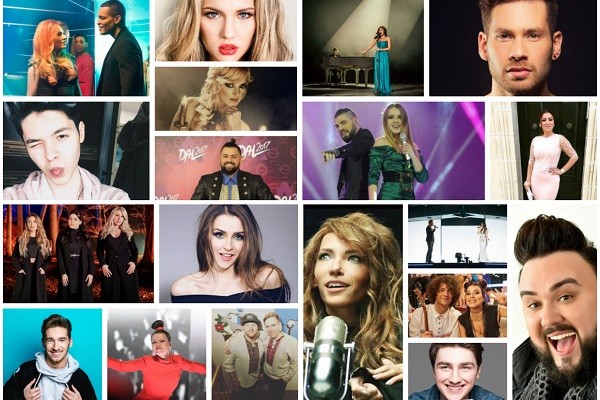 Poll: Who should win the second semi-final of Eurovision 2017?

@redfox: The song is basically about a divorce. The protagonists are barely able to look at each other, yet they sing together (with their backs to each other) when the time comes. They are estranged, just like in the song. What more do you want from the video? Domestic violence and actual drunken behaviour?! 😀

we still never manage anything decent to look at as a video. I am sorry our national broadcasting and aging producers have a dead cat in their brain instead of imagination.

On the above link there is also released new video for FLASHLIGHT Kasia Mos POLAND in the instrumental version ….. Recommended @@@@

Am I the only one feeling Katy Perry vibes upon hearing Laura’s parts?

I love this entry, and thevre-vamp isn’t too different from the original. My only worry is about Laura’s voice – I hope she can pull through for May.

I LOVE THIS SONG. This is topp 3for me. Its so mutch better than the stupid sin from Portugal and Romania.

The revamp is good, for me it doesn’t ruin the song.

@Bring Back Denise – I agree, it’s silly. Would be so no matter what. Especially when the lyrics are about straight “lost and found” love.

I personally find this a quite cheap, schlager kind of song. Nothing new in ESC-terms. Unoriginal.

Okay, I’m actually beginning to think that Estonia could still qualify, but as either 9th or 10th.

Why do you put so much instrumentation on songs? They are supposed to improve the song with the revamp, but they are not!!
We mostly listen to the beat than the actual voices!
However, I still love the song!

I am not liking this revamp. I think that Estonia may have lost its chances of qualifying.

Why do great songs too often get ruined by inferior Eurovision versions? I loved Verona exactly as it was before, but this mix sounds much more basic and cheaply produced than the original and it’s so disappointing.

I’m loving it! She looks much better than in the chewbacca-look at the NF. I even prefer the live version to the studio version, but it’s a great song and I’ll surely vote for it 🙂

Koit looks good in his black leather jacket. Hope he’ll wear it in Kiew too.

There’s an earlier version of the music video with the pre-final revamped version used. Not much of a difference but I like both versions. 😀

This was cut well for Eurovision…unlike Italy (although Occidentali’s Karma is much better than Verona, in my opinion…)

Great song but the new version is slightly weaker than before.The accompaniment does not come through as well as it did in the important builds.

Do you have to put homoerotic lyrics in the mouths of all the singers?

Laura your not going to come last, your not as bad as that elina born and stig

Like in 2012 better sound song from Estonia before revamp.

Guys, the footagae used in this video was filmed before their Eesti Laul performance (there was an older lyric video featuring the original version of the song).