The Voice is a popular television singing competition franchise, with versions produced in over 50 countries and regions around the world, so it’s no surprise that 11 of this year’s Eurovision performers have a history with The Voice.

Nine performers have stood facing the chair backs, desperately hoping for the coaches to turn around, while another two Eurovision performers were lucky enough to be seated in those powerful chairs. Let’s take a look.

In 2013, Artsvik was a contestant on Golos, the Russian version of The Voice. Her soulful audition performance of “Sunny” inspired two of the coaches to turn around, and Artsvik chose folk-rock singer Pelageya as her mentor. While Artsvik was eliminated in the Battle Round, later that year she made a guest performance at the final of The Voice of Armenia.

Under her birth name Ellie Delvaux, Blanche was a contestant in the 2016 edition of The Voice Belgique. She was mentored by the French pop duo Cats on Trees and lasted until week 13. The Voice Belgique has been a goldmine for Wallonian broadcaster RTBF — the show discovered both Roberto Belarossa and Loïc Nottet. Here is Blanche performing a cover of Beyonce’s song “Runnin’ (Lose It All)”. Watch this performance at RTBF.

Kristian Kostov got his start in 2014 at the age of 14 on the Russian edition of The Voice Kids. He was coached by Eurovision winner Dima Bilan and made it to the live shows. Kristian was eliminated in the first part of the grand final. Here’s his audition performance of Alicia Keys’ “If I Ain’t Got You”.

Jacques Houdek has served as a coach on The Voice of Croatia for the past two years. In his first year, he was mentor to Nina Kraljic. She went on to win the series, which led her to be internally selected as Croatia’s comeback artist at Eurovision 2016. Here’s Jacques having a Eurovision moment as he duets with Nina on “Euphoria”.

In 2014, Anja won the third Australian series of The Voice. Coached by Black Eyed Peas mastermind will.i.am, Anja soon became a favourite. She romped to victory after delivering a bold performance of David Guetta and Kelly Rowland’s modern classic “When Love Takes Over”.

Since 2015, Svala has served as one of the coaches on the Icelandic version of The Voice. Here she duets with fellow coach (and 2016 points spokesperson) Unnsteinn Manuel Stefánsson on Sade’s “No Ordinary Love”.

Imri got his start on the first Israeli series of The Voice in 2012. His audition of Hebrew song “My Love” impressed two of the judges, but he didn’t make it much further. He was eliminated in the battle round. Here’s his performance at the blind audition.

The Netherlands: O’G3NE – The Voice of Holland

The Vol sisters made history in 2014 when they became the first trio to win any series of The Voice. Known for their tight vocal harmonies, they gave consistently strong performances week after week. Lisa, Amy and Shelley made an impact at their audition where they performed the Bee Gees’ “Emotion”. Their sweet harmonies inspired all four judges to turn.

JOWST’s featured vocalist Aleksander Walmann got his start on the Norwegian edition of The Voice. He did very well on the series and made it all the way to the grand final. While he didn’t win, he came second-equal as the highest ranked contestant in his group.

Singer Ilinca and rapper Alex both got their start on The Voice of Romania. Ilinca has her moment on season four in 2014. She impressed the judges with her audition of “I Wanna Be a Cowboy’s Sweetheart”, where she demonstrated her talent for yodelling. Alex appeared the following year and proved himself as a rock vocalist, with performances of songs by artists such as Bon Jovi and Meat Loaf. Both Ilinca and Alex were eliminated in the semi-finals of their respective years.

Who is your favourite former The Voice star at Eurovision 2017?

Coming soon: We’ll also be taking a look at Eurovision 2017 artists who have found fame on other talent show, including X Factor and Idol. 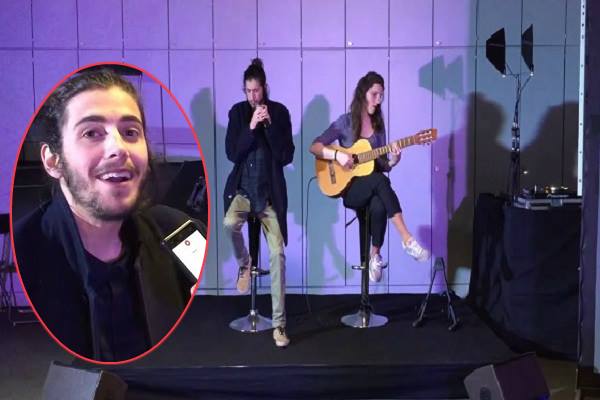 Portugal’s Salvador Sobral: “Every person with a tiny bit of sensitivity will feel it”

SVALA! I LOVE HER SONG “PAPER”!

Aleksander Walmann from Norway was also on “The Voice”
https://www.youtube.com/watch?v=jxIVFqJzwIY&feature=youtu.be

Wow! Ilinca you are amaziing! She is so talented .?

OMG! I did not like the song of Romania, but Ilinca has an extraordinary talent. It ‘s really good. I love her!

After listening to most of them on youtube eg- auditions, covers, concerts etc I think that O’G3NE, Anja, Jacques & Atsvik are the stand outs.

Both mentors who turned around for Imri are ESC related.
Sarit Hadad was Israel 2002 (Light a Candle), Rami Kleinstein was married to Rita (Israel 1990) and composed her entry (Shara Barchovot).

Ilinca was the best of course <3

Svala was famous way before she was on the Voice, that’s why she was a coach. She has been singing since she was 7 years old

@Marc
Oh, I didn’t know. Sorry for that.

What about Aleksander Walmann, who singing together with JOWST(who’s really only the producer/DJ). Aleksander got discovered when he reached the final of The Voice Norway a couple of years ago.

Ah, so different than here in Italy..
Like @Polegend Godgarina said, here it is useless, nobody had fame from it(instead es. Giusy Ferreri, Francesca Michelin, Marco Mengoni etc had it from X Factor).

Voted for Imri and Ilinca <3

What about Kristian Kostov?

That Euphoria duet is AMAZING.

Yes, I was talking about Jowst. It’s Aleksanser, the lead singer, I wrote it wrong

OK, but where’s Alex Florea’s video from Vocea Romaniei audition? Why it’s only Ilinca’s video? It’s a duet, they are two artists….

I don’t know about the other countries, but here in Italy The Voice is so useless. In several seasons it’s never produced one single successful artist (just like the American edition). Its only purpose is to promote the coaches’ careers…

@AngieP I think Marc is talking about the vocalist of JOWST, this year’s Norwegian entry, not about A. Rybak.

* And don’t forget Jacques! His song may be weird but his voice is amazing!

At first I expected to see artists that participated at the Voice, but I saw that coaches are also included!

My favourite as an act is probably Belgium!
P.S.about Belgium: what beautiful voices Belgium has! First Loic (my favourite) and now Blanche!

My favourites based on the voice are (except Belgium) Anja and O’G3NE! Great voices!!

@Marc
The article is about artists of this year’s contest, not in general!
If that was the case, we might spend a week talking about it!

Norway? Alexander was in the voice there.

Good list but I am not sure if Kristian Kostov should be included. I know maybe The Voice Kids Rusia is not The Voice, but part of the franchise