Jacques Houdek’s entry for Eurovision 2017, “My Friend”, begins with a spoken quotation from the famed physicist Albert Einstein. And it’s totally a 100% genuine quote. Like, it’s not just some a random internet quote that has somehow been misattributed to Einstein or anything. 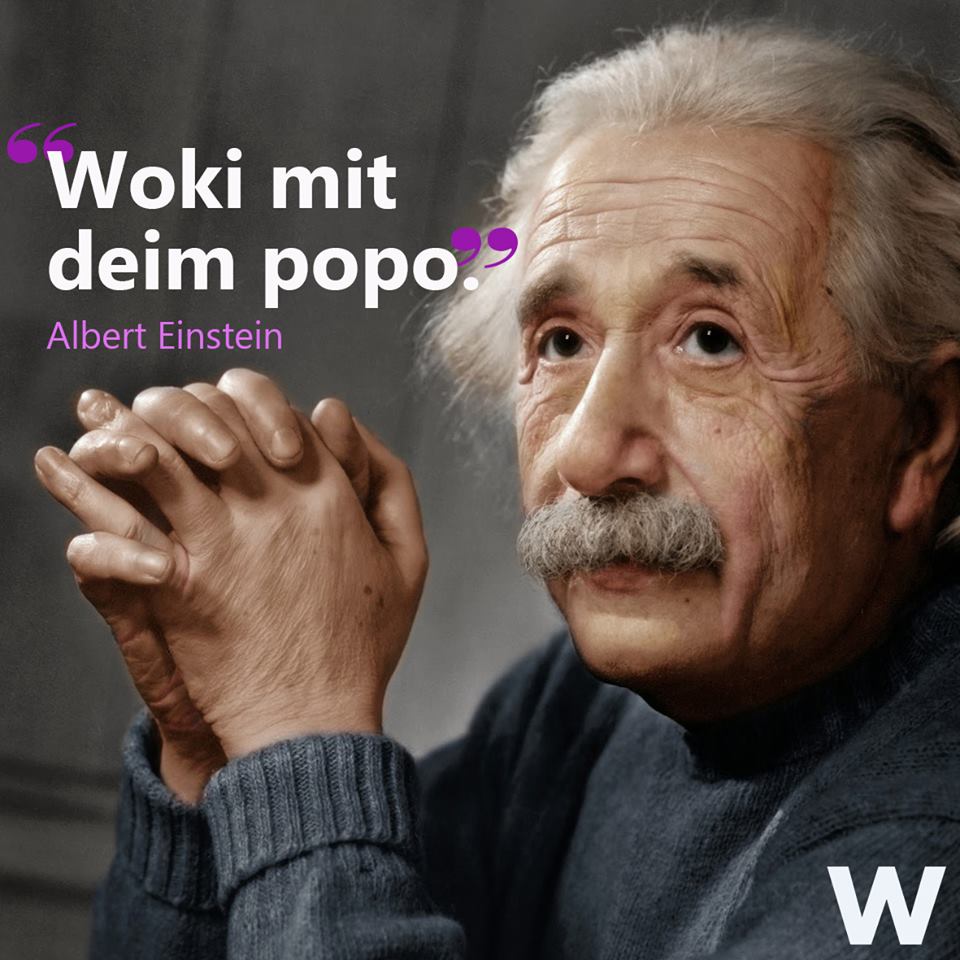 This year won’t be the first time that a 100% totally authentic Einstein quote has been used in a Eurovision lyric. Back in 2012, Austrian hip hop group Trackshittaz based their entire Eurovision song around Einstein’s famous quote “Woki mit deim popo”. While the phrase means “waggle your ass”, it is thought that Einstein used to mutter it in the lab to rogue atoms that were refusing to obey the mass–energy equivalence formula. Alfred Nobel was the Swedish chemist known for inventing dynamite and for later establishing the Nobel Prize. When Nobel was in the process of setting up the Prize, there were many questions regarding the nature of the award ceremony. How many people should be invited? Finger food or a sit-down meal? And should the bar be open? Alfred was asked and he responded, “Alcohol, alcohol, alcohol is free!”. In 2013, Greek group Koza Mostra paid tribute by basing their Eurovision song around his quote. The American President Abraham Lincoln is known as a great orator, especially for delivering the Gettysburg Address. But that’s not all he said of note. One day when Lincoln was visiting a small American town, a young boy on the street asked him, “Sir, why do you have such a funny look on your face?” The president replied, “Well, son, that’s because of my shoes I’m wearing today. One is called love, the other is pain.” In 2013, Lithuanian singer Andrius Pojavis used this quote in the chorus of his Eurovision song “Something”. While Mozart is best known for his musical compositions, the acclaimed Austrian musician does have one famous line attributed to him. Whenever he’d finished working on a major piece, Mozart would rest his quill atop his manuscript, pause and then exclaim, “Say yay, yay, yay! Say yay, yay, yay! Hurray!” More than 200 years later, Barei paid tribute by using this line in her Eurovision song “Say Yay!”. Marie Curie was Polish physicist who did pioneering work in the field of radioactivity. One of her many accomplishments was developing mobile X-ray machines for use in the World War I. When she was working on this technology along with her lab assistant Avril Fuehl, Curie knew the machine was functioning when she could see her own bones. “I’m a skeletons,” Curie exclaimed. This year Azeri artist DiHaj pays tribute by using the literal actual real quote in her Eurovision song “Skeletons”. Sigmund Freud is known as the “father of psychoanalysis”, but the Austrian doctor was also known for his theories behind dream analysis. Freud would listen to his patients describe their dreams then offer his interpretation. But it wasn’t always so easy. After listening to one particularly long and boring dream, Freud was heard to exclaim, “Linen in covered with feathers. Wet dreams, wild nightmares, I surrender!” This quote became the opening line of Slavko Kalezic’s song for Kyiv, “Space”.

Good morning! What do you think? What is your favourite historic quote used in a Eurovision song? London Eurovision Party 2017: Send us your questions for the stars!

@ Robin
Omg seriously?? I’m feeling so stupid right now then ahahahahah
Btw thank you so much for the clarification 🙂

Well, now that I understand the lyrics (thanks again) I think the X-ray effect in the video is actually a rather lame attempt at picturing the symbolism, but it does make sense. 😛

It’s all right, we’re talking about the actual lyrics now. It’s technically off-topic but I think it’s a decent conversation. 🙂

@ Kris, you helped me to connect Dots between the song and video.

Oh i thought the discussion was on why her bones are shown in the video!! So i didn’t say that the first time around.Glad i could clear it up for you. 🙂

@ Robyn, it is a joke or not. It is a nice discussion. We are trying to understand the actual meaning in this song and video. Personally, my comments are not referring to your jokes, nor I take it seriously.

Oh my freaking god, now I got it. It’s a reference to the expression “to have skeletons in the closet”. THANK YOU! I know that expression I just didn’t manage to link it to the lyrics. My dearest apologies to Sandra Bjurman, I did her wrong.

In German, we have a simliar expression: “eine Leiche im Keller haben” = “to have a dead body in the basement”

There is another explanation.
Maybe she is an Anotomy professor and is trying to confess her love to another Anatomist by letting him have the skeletons in her lab as well as her lung specimens. 😮 lol

Well done, @ Kris. I was trying to figure out why she would want to show her skeletons. Now it makes sense.” Skeletons in closet” and now she wants them out of it.

The lyrics refers to skeletons of the past in the closet….which usually pertains to facts/incidences that may have a negative impact on people’s perception of someone and hence are best kept buried.

In the video you see her bones which implies that her soul has been bared as she has let the skeletons out of the closet.

Thank you. It is out of question that “skeleton” is a metaphor for something. If it’s her bare soul, I think it should still be “skeleton” and not “skeletons” (otherwise it would represent her bare soul*s*, wouldn’t it?).

Okay, one more try to make these lyrics work: Maybe she has different personas/characters inside of her. There are different shades of her personality and they are all laid bare (“to the bone”).

Actually the video shows skeletons to mean “The bare soul” and not the”206 bone framework”.My lungs=life.

P.S.I’m not a native speaker but I come from the country with the maximum English speakers.

Yes, I did. But I do not think the video reflects lyrics.

Have you watched the video? Even if it’s a metaphor, the word “skeleton” is definitely used in the meaning of “bones”.

It would make A LOT OF sense if she meant “skeletons” in the meaning of “leftovers”, i.e. “There is not much left of me/of my possessions”, but it doesn’t work with the rest of the lyrics.

She doesn’t say I am skeleton / skeletons or I have skeletons. She sings ” Have my skeletons” which is correct in any sense . Overall from the song it can be understood she meant she has past memories that she prefers not to talk about with anyone else.
I don’t understand why people superficially think that she sing about human bones, lol.

Why Francesco is not in the list?
His song is full of quotes!
“Panta Rhei” Heraclitus
“Singing in the rain” Gene Kelly
“To be or not to be” Shakespeare – Hamlet
“The naked ape” a book by Desmond Morris
“Coca dei popoli, oppio dei poveri” Karl Marx

I think the issue here is that she sings “have my skeletons” instead of “have my skeleton”. A human being usually has one skeleton, not multiple skeletons. The video implies that she actually sings about the bones inside her own body, so it can’t be a reference to something else.

As much as I love the song, Azerbaijan’s lyrics are a bit of an April Fool’s joke: “Have my skeletons/Have my lungs, my millions”

But doesn’t she say “Have my skeletons”?

From now on, it’s a fact that Albert EInstein said “Woki mit deim popo” and no one is gonna convince me otherwise.

The official lyrics on the Eurovision website has it as “have my skeletons” which both logically and grammatically correct. Do I don’t see why everyone saying it’s not. Unless it’s an April fools, but I thought the article was enough. Lol

LOL, you got me. I almost believed the one with Austria 2012.

That was a good one. Lol
As soon as I read Austria 2012 and Einstein in one e sentence I gotcha.
All jokes Aside but remember Glenis Grace from Holland back in 2005.
Her song started with I had a dream.

Happy April fool’s day!!
You caught me guys! Ok, honestly, when I saw Mozart saying “Say yay”, I realised the whole thing is a joke!

I had trouble buying that Einstein would say “waggle your ass”, and of course today of all days one should not believe what one reads. 😉

Oops, I always thought she was singing “Hide my skeletons”

Also Italy 2017
“Ta Panta rei”, from the Greek philosopher, Heraclitus. It means “everything goes on”.

It does make sense. She’s saying she trusts you enough and loves enough to give you her skeletons from her closet. In other words her baggage.

Hahaha. You can tell it’s fake, besides the very ridiculous nature of it, by the fact that’s not the Azerbaijain’s lyrics. I thought that, but it’s actually “have my skeletons”

Thank you, that was entertaining! Frankly, I don’t really understand the lyrics of the Azerbaijani entry. Maybe they just thought that “Skeletons” would be a good song title and in the end they just had to make it work somehow. My attempt at an interpretation: She’s the owner of a very successful Halloween costumes shop (“Have my skeletons, my lungs, my millions”). One day she gets robbed by some guy (“I never dreamed that this could be happening, not to me”, “Drum drum drum, bring out the guns”) but she falls in love with him, mainly due to his extravagent… Read more »

Dihaj says “Have my skeletons” not I’m a skeletons

@Spirit Animal ^^ Why would she? Hr lyrics read “Have my skeletons”.

I hope Dihaj changes the lyrics to Skeleton… when she sings “I’m a skeletons” makes me cringe. Otherwise it’s a great song!

Albert also said “we are the heroes of our time but we’re dancing with the demons in our minds”.

Hahaha, thank you guys, first laugh of the day (but the Marie Cure one was also really sweet) 😉

Ther’s another Nobel’s quote you forgot about. After the first ceremony of handing prizes, Alfred Nobel organized an after party and declared “party for everybody, dance. Come on and dance.”

lmaoooooo you got me Wiwi

Anyone else, just like; Azerbaijan, that sentence makes no sense?

Azerbaijan and Montenegro are 2017