She’s the former X Factor contestant who’s gone on to become a bona fide West End star. And over the weekend, Lucie Jones was in Amsterdam for this year’s Eurovision in Concert.

There in her capacity as the UK’s representative at Eurovision 2017, she performed “Never Give Up On You” during Saturday’s show. But before all that, our William caught up with her for a quick chat.

Dressed in chic summer-wear and sporting an informal double bun hairstyle, Lucie explained that she’ll never reveal the true story behind her song.

Every time I sing this song, I tell the story to myself. But I will never tell anyone what my story is to this song. Maybe one day, but not until after Eurovision. I just love that everyone I speak to has a completely different story of what it means to them and I think that’s really nice. It’s really special. So I don’t want to ruin that.

On her upbringing, Lucie paints a wonderfully idyllic image of the Welsh countryside — just don’t call her a farm-girl.

I grew up in a village where there was lots of fields and cows and sheeps [sic] and things. But it was also near a city, so I’m not a real farm-girl. I’m kind of both. I’m like town and country.

Inevitably, conversation quickly turns to her X Factor stint and her infamous elimination to Jedward.

At the time, I was really upset. I wanted to stay. But then the next day, I was like – “It’s a TV show, these things happen, whatever happens happens”.

But every cloud has a silver lining, and this particular one led her to her agent who now looks after her West End career. Speaking of which, she’s starred in Rent, Legally Blonde, Les Miserables, what’s been Lucie’s favourite role?

Elle Woods. Snaps for Elle, oh my god you guys! It was just the most fun ever. I had the best time.

To find out more about Legally Blonde and how it impacted Lucie’s chihuahua, watch the interview below. Afterwards, watch her live performance of “Never Give Up On You”. And if you’re after something more upbeat, give the 7th Heaven remix a spin — as recommended by Lucie’s dad.

Lucie Jones “Never Give Up On You” at Eurovision in Concert

Lucie Jones “Never Give Up On You” 7th Heaven remix 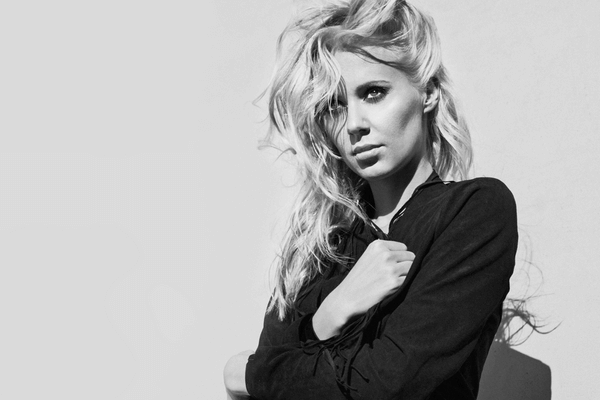 Best of luck Lucie!!! You can TELL she connects to the song, it shows very much in her live performances.

Why on earth are people criticising UK/Lucie because she did not write the song?

The vast majority of songs in Eurovision are not written by the singer but I do not see people criticising that (nor should they). This is just another example how the UK is hated upon in Eurovision – if you do not like the song thats perfectly fine but no need to criticise Lucie who clearly is very talented!

Why on earth are people criticising UK/Lucie because she did not write the song?

The vast majority of songs in Eurovision are not written by the singer but I do not see people criticising that (nor should they). This is just another example how the UK is hated upon in Eurovision – if you do not like the song thats perfectly fine but no need to criticise Lucie who clearly is very talented.

The song fits her completely, and I don’t get that first comment, considering that Emelie was cheering up for her.

One can feel connected to a song no matter if they have written it or not. And that’s also the case with me and Lucie’s stunning ballad. She is so cute and her voice is great. Best of luck. <3

I am not a fan of this entry. Really over the top for such depressing song

This song is quite touching to me, even though I don’t wrote it or sing it.. that’s a beauty of art, isn’t it? It tells also my own personal story, that’s why I connected immediately for this song.. Good luck Lucie <3

You don’t need to write a song to be able to have some connection with it. Lucie clearly connects to the song in some way and technically it is her song since it was made for her.

Everyone imparts their own story on songs — even those of us who just listen to them as oppose to sing them. She was definitely feeling something when she sang this at Eurovision: You Decide. So I say you go Lucie!

@Artsvik Fan
What? By that (weird) logic, Artsvik doesn’t have a story for the Bird Song because she didn’t write that.

Lucie Jones
You dont have a story of this song. You did not write it just singing other person’s story and emotions. This song is a story of Emmelie and she is the one to share her story if she wants to.