He flew the furthest of any competitor to get to Kyiv. And on Sunday Australia’s Isaiah made it clear he’s no worse for the wear as he took to the Eurovision stage for the first time with “Don’t Come Easy“.

After his first rehearsal — where he walked the walk on a rotating platform — he talked the talk with our William and Deban. They asked him what the Eurovision experience was like compared to his time on The X Factor Australia.

“Definitely there’s a lot more hype around Eurovision,” he says, “and the fans and the press — there is more than The X Factor. And also just the stage, this venue and the arena, it’s all like The X Factor times 1000.”

Isaiah’s staging focuses on him, with the LED screens showing various shots of the singer.

“We definitely wanted to create something more kind of intimate, because it’s such a big arena and we wanted it to be drawn in just on me as a performer. So that’s why there are so many clones of me all over the screens.”

On one particular shot, which involves him spinning around in circles, Isaiah says “It’s supposed to go faster than that. But I wanted to go faster, especially in the big note.”

Australia’s staging is being directed by the experienced Sasha Jean-Baptiste, who is also directing Bulgaria’s Kristian Kostov‘s show. Isaiah certainly seems pleased with her work!

“She is amazing at what she does. And she is so nice and so supportive, so it’s great.”

He also appeared to be satisfied with his first rehearsal in the Ukrainian capital. “I was expecting to be nervous for today’s rehearsal, but I was just like, ‘I’m cool’, so I enjoyed it a lot.”

Isaiah — who is of Aboriginal ancestry — feels nothing but pride in his roots: “I am really proud of who I am and where I’m from.”

What do you think? Can Isaiah take the trophy Down Under? Let us know your thoughts in the comments below!

Portugal’s Luísa Sobral: “I think there’s no reason to change anything” 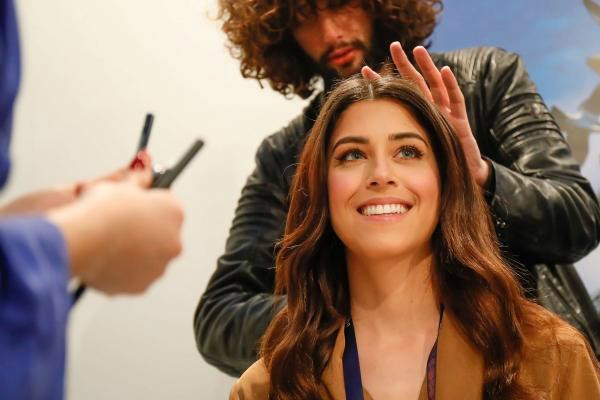 The staging will be amazing cause Australia are always good with their production. The views & angles while he is on the rotating platform will take the visuals (as seen on tv) to a whole new level. We will not see the large screenshots of him for the entirety of the performance (the backdrop might be more subtle). I’m sure the performance will sound & look equally amazing.

I’ve seen Isaiah live when he supported Jessica Mauboy a few months ago – his vocals are flawless, so I’m not worried at all.
His background screen though… I’m not a fan.
C’mon Australia.

Please can I be negative? Pretty please?…
The background screen makes me cringe. It’s too “intimate.” Please Australia: re-think this concept.

He’s so likeable. Can’t wait to see his full performance. My top 5 this year