She’s the German singer who knows she can’t do any worse than her Eurovision predecessors, given that Germany has finished last in back-to-back years. And today Levina threw down her bid to finish higher than 26th with a stunning performance that will surely have some haters eating their words.

Levina starts the performance on her back, wearing a monochrome dress, which looks amazing against the LED floor that resembled molten diamond — appropriate since she sings about perfection. It’s one of the most amazing shots of the entire competition. When Levina stands up she also stands out — working a slick up-do that gives her extra edge. She also played a subtle but somehow dramatic make-up game, working a bit of foundation, nude lipstick, kohl eyeliner and lashings of mascara.

Vocally she was on point — except for one long note that she consistently missed. Perhaps it was the mixing. But she soon pulled it together with a pyro rain shower that added warm golden hues. She may be giving us silver and gold, but unlike Ann-Sophie she’s not finishing last.

Read all of our Spain Eurovision news here 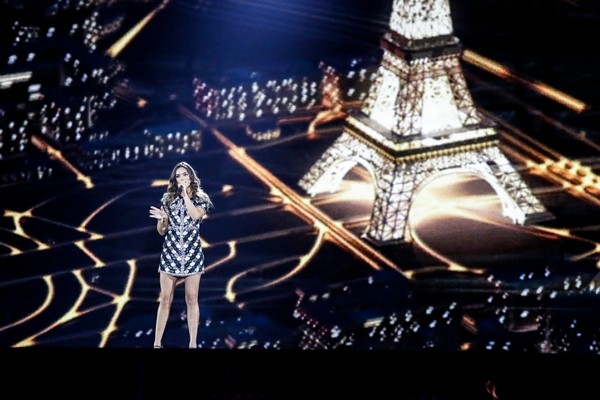 Thank you so much for your review, Chris, William & Padraig – what you said about Levina`s performance was really nice!! And your German is amazing, William!! It seems you have a certain faible for it… 😉 Somehow I´m still a little bit sceptical about how Germany will end up in the final – but I really hope your prediction will come true and we won`t end up last again – fingers crossed… Viele Grüsse aus Deutschland!! <3

Well, i think she could be a candidate for Top 15. I’m excited too see the first 20 seconds. i heard so much about the outstanding beginning. One question: Is she the only one that sings the song on the press conference??? I would say it’s a big positive point. She shows that she really want to be a part of the ESC and that’s what i like.

Hm… Maybe she will finish better than exppected? She will not win or finish in Top 10 but i dont think that she will become last. The press loves her and after her rehearsal there was a very big round of applause. It doesn’t sound like Titanium anymore and of course the text is so good and easy that u can sing it directly when u hear it. The song is nothing special but it’s remindable.

Have u heard the ESC-version of the song???? There is no Titanium anymore…

Who the hell is Titanium and why are we talking about him?
Do you think that 204 mil viewers will care who the efff is Titanium?

Everything is nice, but not the hairstyle. She looks older, like in national final. In the video the hairstyle is also bad. She had good hairstyles in preparties. She looks better when she is not trying too hard. Let the hair natural.

Germany in ESC is like England in football: Bad at the very thing they created! (football vs schlager)
There is a big chance of Germany doing a hattrick and ending up last three years in a row. There is nothing remotely exciting with the entry. It’s even worse than Ghost which was a pretty useless entry too.

England in ESC is like germany in war, talk big at first but always end up in surrender monkeys

England is not in esc, is UK…and Germany is not in war, is just cleaning UK+US mess.

“Perfect Life” is weaker than “Ghost”, which was weaker than “Black Smoke”, which got nul points. After a few very successful years at the start of the decade, Germany doesn’t know what to do with itself in Eurovision anymore.

I’ve always hated this song but Levina is a good singer. I actually think they’d fare better with a stripped back, acoustic version of the song. Because what they have right now is far too over-produced and soulless.

Perfect Life weaker than Ghost?
Ghost is one of the most boring songs of the last few years!

I agree that Levina could handle a more stripped-back version of the song, though. She has a really nice voice.

Why don’t you shut up. You are full of vile and evil. I hope russia come to your country and teach you a lesson. Jamie Lee is a perfect song. She is a child of the moon. She is the ruler of the heart

I have to say I really liked her outfit and her look in general! Her hair is fierce!
I’m not thrilled by the rehearsal! I quite liked the colours and how they fit her outfit! That was actually good!

I never understood why the German entries always ended up on the last spot.

I’ve genuinely liked all of them in the recent years. Ironically the only one I didn’t like was Satellite (Taken by a stranger was a bop though).

Hopefully Levina will do well. And I’m super excited to see that Diamond thing they were talking about.

I loved “Taken By a Stranger”, definitely my top Eurovision tune of 2011. I think it was a song that was somehow ahead its time; I could easily see it getting top 5 or higher if it was in ESC 2016!! The closest we have this year is “City Lights”, but Blanche needs to learn a few things from Lena about performing well on stage.

If she shows up with that weave, nul points confirmed…

I don’t know the Word weave, but your comment does Not to be nice. Why?

Manel will snatch the weave. He wants that last place hun-neeeeee

Beautiful staging and Levina’s voice and confident performance elevates this decent song.
Not sure if dress is good choice, imo gray is the most bland colour ever, add little colour, it’s perfect life after all 😉

Grey is the most german color hun-neeeeee

It’s such a shame she has a forgettable song, this girl really is so much better than what she has to perform with! Maybe not last but bottom 5, performer is worthy of top 10 though!

Wow, the staging is amazing but the song is still really awful for me, sorry. 🙁

Very nice staging. The song has grown on me as well.

Thanks for the nice words! Levina definitely is better than people thought before seeing her live on stage. She is such a nice and talented person. Please be open and call for her next saturday of you like her performance! Greetings from Hamburg

I love the Song and the video! I hope she will performe selfconfident, cool and strong! Deal! 😉

Thank you guys for the kind words. As a German Eurovision-fan it’s refreshing to finally get at least some positive vibes again. 🙂

Hey, Germany had three top ten finishes in a row this decade and you at least get to be in the final every year!
Try being an Irish Eurovision fan – once the heavyweights of the competition, now permanently stuck in the semi-finals and unable to send anything that does better than Jedward. =(

A radical suggestion to Levina and Team Germany:
Sing the song in a lower key and completely “a cappela,” a.k.a. without any backing music whatsoever. Just try it.