It might be the weekend but there’s no rest when it comes to Eurovision. The second set of semi-final two rehearsals took place today, with thirteen more countries taking to the stage again. Brendan Murray soared in his hot-air balloon for Ireland. Croatia’s Jacques Houdek showed us two looks in one. And Bulgaria’s Kristian Kostov mastered his on-screen squiggles.

But which of the thirteen countries performing — The Netherlands, Hungary, Denmark, Ireland, San Marino, Croatia, Norway, Switzerland, Belarus, Bulgaria, Lithuania, Estonia and Israel — was your favourite?

You can watch all of our footage, alongside our reviews of today’s second rehearsals, in the playlist below. Once you’ve watched them, then vote in our poll. You can vote for as many countries as you like, but you can only vote one time, so make it count. Be sure to click the box next to each act you want to support before pressing submit.

Reviews and footage: Second Rehearsals (May 6)

Poll: Who had the best second rehearsal on May 6?

Vote in all of our Eurovision 2017 Polls 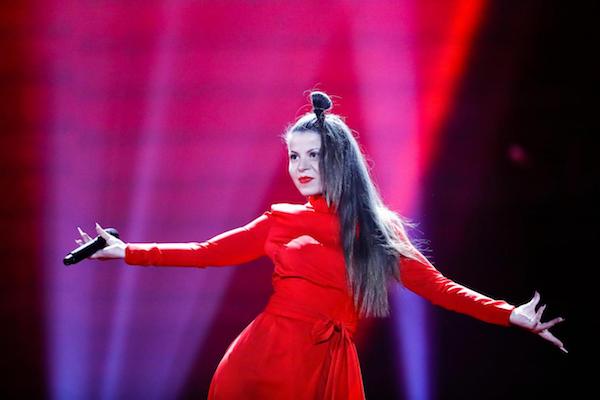 Poll results: Armenia’s Artsvik had the best second rehearsal on May 5th

I loved Croatia song! Its so original and beautiful! #voteforcroatia #winners2017

Norway just jumped to my number one.
JOWST is a breath of fresh air among endless boring ballads! Super cool and super catchy! NR 1 <3

my reaction to the 2nd semi final 2nd rehearsals: https://www.youtube.com/watch?v=RuBsKwcVmqU

Ireland is looking good. The voice is everything. With the theme of diversity, Vrendan Murray’s voice has a place. I do agree you either love it or you don’t but that’s good for Ireland. Those who love it will vote for it. Songs like Denmark where people are on the fence (are indifferent) and kinda go meh! to the song will struggle to get votes.

Netherlands and Hungary. Both impressive

Estonia`s Laura has already secured the number one position in one category: she`s the best dressed female performer in Eurovision!

I thought that the Netherlands and Belarus were the best today.

1. Estonia has got it right after the woeful excuse for a song last year. It’s a shame the backdrop is so bland but maybe black and white is how they like it. Verona is so catchy and I hope to see it in the top 5.
2. Denmark with Aussie Anya is very strong vocally with a great performance. Not as memorable as Verona though.

They are the two that stand out and get my vote.

Semi Final 2 is tough.
Bulgaria had the best rehearsal, I think. Estonia, Croatia and the Netherlands all really good, too. Nobody was bad, however.

Netherlands will qualify! Those harmonies are amazing! They are the Poland of this year. If you read those lyrics on page, they would look cheesy, but on stage, it just oozes emotion.

On the other hand, I think it’s safe to say that San Marino will not qualify. If Eurofans, who already love Valentina Monetta, cannot put it past the last place, I’m assuming general audience won’t be much more benevolent.

Croatia was absolutely amazing. I love their performance. Pyros really build up the enegry of song which is actually very high for itself… Well done Croatia. The Netherlands were also very good. Their harmony is great. Israel dissapointed me so much! I cant stand hearing that AWFUL voice… Th esong itself is one of the best in this decade…

My vote goes to Israel)

My vote goes to Macedonia slay !!!

The best rehearsals for me were from Hungary, Norway, Belarus and Bulgaria!
But I also love Switzerland and Estonia!

“You should never cry, no more
Feeling all alone and insecure
You have been going through these stages
Now it’s time to turn the pages

Winners today: Netherlands and Belarus (you can’t help but smile when you see them!).
Underwhelmed or as expected for the rest.

Croatia and the singer’s vocal power are outstanding

People are focusing more on what they want the song/performance to be but not what it actually was on stage and what we see in 30 second snippet. That’s the only reason people would say that Israel is any good. It’s terrible. It’s even worse than Estonia. And Denmark… Well it is not awfully shouty anymore. But still no good. Switzerland looks sooo cheesy and they have hardly any chance to qualify. San Marino is simply no good. Croatia is neither good nor bad. Let’s switch to the positive side. Hungary is not any better that it was in NF.… Read more »

Yay, best of luck for Lithuania! 🙂

Israel and ireland were the best

The Netherlands are top 5 to me overall

There are a lot of good songs/performances really.. I mostly liked Netherlands, Croatia and Belarus today.

Only Bulgaria and Hungary.
The others are “deja vu” songs.

The Netherlands, followed by Bulgaria and Estonia!

From today’s rehearsals I liked a lot The Netherlands and Croatia.
Bulgaria, Estonia, Belarus and Hungary were nice as well.

I loved ISRAEL, The Netherlands and Bulgaria.

I honestly do think Croatia can go quite far. This song (and singer, probably even more) was hated and critizied from sole beginning – we all know why. Now even harshest should admit – the performance is good, singing is great, song itself might be cliche but its still nice. It’s original and I do hope jury and voters will award it with points.

And about Lithuania, I am one of very few who actually liked the song and performance seems to be very classy. So, to our northen neighbour, best of luck.

I have The Netherlands quite low in my top but I can’t deny that today’s rehearsal was amazing. They got my vote!

Ireland has impressed me so much! I’m quite surprised, but also nervous just in case we don’t qualify…this reminds me of Black Daisy in 2009 and Molly in 2015 who deserved to qualify…but didn’t.
I hope Europe gets behind him. Loving Bulgaria, Israel and Hungary too

I also hope Ireland will qualify

This is such a strong semi final. Anything can happen. Voted for Croatia, Belarus, Bulgaria and Estonia.