Following her well-received first and second rehearsals, the UK’s Lucie Jones is fast becoming one of the Eurovision 2017 favourites. However, the same can not be said for the country’s broadcaster BBC.

For the second year running, the channel has opted to replace the semi-final interval act with an in-house comedy spoof. The skit will see BBC Four semi-final commentators Scott Mills and Mel Giedroyc parody the Taken films and take to the streets of Ukraine dressed as police officers.

Mills excitedly dropped some hints to The Sun:

“We’ve got some ridiculous filming for the semi-finals. We’re dressing up as police officers — we’re doing a pastiche of the film Taken. We’ve got Ukraine police outfits.”

The yet to be broadcast clip is already causing some controversy. Also speaking to The Sun, a source says:

“Things are tense in Ukraine and by cutting out segments from Ukraine’s broadcast which celebrates love and peace, to do a silly spoof, it makes a mockery of the show. The BBC are once again the only country to boycott their interval performance in the semi-final.”

In response, a BBC spokesperson explained that the decision was purely logistical.

“In agreement with the European Broadcasting Union (EBU), for the past few years, the BBC has shown short films and interviews instead of commercial ad breaks or during the voting window of the semi-final that the UK audience cannot vote in.”

Update: BBC showed Jamala but replaced other elements of the show. 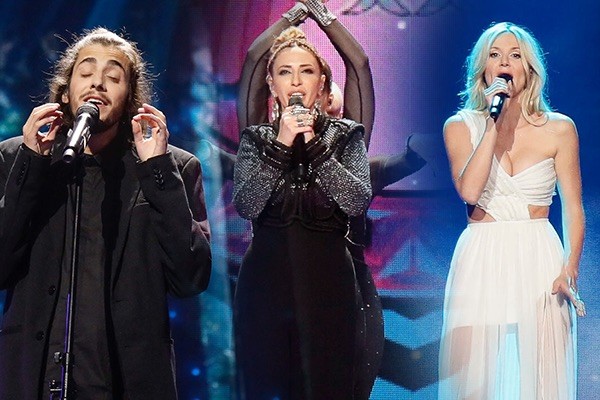 Eurovision 2017: Our country-by-country guide to semi-final 1 Hi my friend! I wish to say that this article is amazing, nice written and include approximately all vital infos. I would like to see more posts like this.

The BBC’s constant warnings about flashing images and strobing effects are pretty annoying too. Do other broadcasters do this?

Your Name *
Reply to  Jonas

Well to be fair, it’s not a very high price to pay to prevent thousands of people getting seizures. Epilepsy is more common than you probably think. For example, 685 people ended up in hospital after a poorly thought out Pokemon episode : https://en.wikipedia.org/wiki/Denn%C5%8D_Senshi_Porygon

I was about to say…. I watched it on iplayer last night and was pleasantly surprised when they showed ALL the interval acts in full. Well done BBC!

I’d do anything, literally anything, not to have to watch the awful Mel Giedroyc! Fortunately I’m living in Portugal so watched the Portuguese broadcast instead even though I do have access to the BBC. It seems though that this article is quite inaccurate but thanks for the heads up that the comedy spoof will be shown Thursday. Another great reason not to watch the BBC. Thanks.

The problem is, more we comment on it. Wiwibloggs will keep the article up. They won’t respect our views.

well we all know if it is in The Sun it must be true. NOT.

You might of changed the article but it is still wrong. :/. Dissapointed with wiwibloggs

The BBC showed both of Jamalas acts though

First of all, the BBC showed both intervals acts tonight in full, so the Sun article was just clickbait to outrage people. When they DO skip an interval act, the BBC’s comedy sketches often feature lots of the other countries’ artists. They do interviews with them too and give you more information that can make you like the other countries more….it’s not meant to be disrespectful to the hosts’ show, even if the comedy can be stupid sometimes. No one gets mad when some countries have commercial breaks during the green room segments…. To make it sound like the BBC… Read more »

Has no body thought after the backlash lash year and the rising backlash this year the BBC has decided not to show them. The proof is there that they filmed it. I know numerous people such as myself took to Twitter and told BBC Eurovision not to show it out of respect of Ukraine. I’m not saying I changed anything but I think with the article and social media telling BBC not to they relented.

They are showing the comedy clips in semi 2 as that is the semi UK cannot vote in.

Nope, the BBC trailed in advance that the sketch will be in SF2. Really, there is no backlash or mass movement. They have never shown the interval act in a SF going all the way back to Istanbul; they’ve always had interviews and VTs. If viewers are desperate to watch what they may miss, the broadcasts are available live streamed and saved on demand for posterity. This is not a big deal, and is not news.

Yes, the UK voted in semi 1, so all the recaps were necessary. They will likely show their “hilarious” comedy routine during all the recaps on Thursday as there will be no need for UK viewers to see them.

Missing the recaps isn’t the worst, but cutting the intervals is a bit much, I agree.

I love Mel from the Great British Bake Off so I can forgive her anything. I’m glad I’m not actually in the UK, though, I much prefer seeing the show as intended by the host producers.

We did see Jamala though.

Padraig: Please remove or amend this article. It is inaccurate. Thank you.

I feel sorry for wiwibloggs; it’s got itself into “Fake news”. You don’t want to fall victim to it wiwibloggs.

Let’s keep wiwibloggs a trusted fan website. One that doesn’t give out fake news

Well done on perpetuating incorrect news from a tabloid newspaper. Not exactly spreading love and peace… I know this is a blog about eurovision and not a a world news site but actually wait to see it’s true before posting … we watched it saw the interval act jamala. It’s actually the 2nd semi final that will have that comedy sketch on it and thats the one we don’t vote in and it’s something the BBC has done in the semi finals before. This is honestly the first time wiwiblogs has disappointed me as I love this site!

Agreed, I love Wiwiblogs, it’s by miles the best Eurovision site out there. Don’t expect to see fake news on it attacking a host broadcaster 🙁

I’m feeling sorry for the UK – Jamala slayed, her 2nd song was absolutely incredible!!! Hope you had a laugh instead…

The Article is fake. The BBC showed both Jamala performances. The 2nd one was awful.

Here in Greece, we also didn’t see the interval act! We actually saw Jamala singing 1944! But she performed again later and here there was a break!

The BBC almost never shows the interval acts, and instead interviews artists from other countries.

However it showed both Jamala’s interval acts today, the 1944 Symphonic and that god awful Zamalyny something or other.

The only things we missed were the breaks after song 6 and song 13, something to do with Moldova in 2010?

I’m in the Uk watching it and I’ve just seen Jamaala as the interval act. So let’s delete this article before even more people hate us please!

Unless, of course, you’re a wheelchair-bound girl from Russia. No love for you !!

Hey, any US fans with a workaround for the region block? So stupid. F*** Viacom

We must hope that ratings this year are DOWN from the already awful ratings Logo TV got last year. Maybe then, no US station will want to broadcast it, and we can once again watch live online (and re-watch on youtube).

I found a workaround, but yeah, the EBU has dropped the ball here. Why would you want US fans to be able to see LESS of the contest?

To be fair, I don’t think it’s the EBU. Logo TV is owned by MTV, so the EBU probably thought it could find a niche audience to introduce the contest to Americans. However, American TV companies being what they are (and especially now since Cable is losing subscribers due to Netflix), Logo TV wouldn’t allow Eurovision to be available online. It’s been a year, and we still can’t watch the 2016 contest !!! The EBU really should have licensed the contest to Netflix, Hulu or Amazon Prime, but I guess since they’re a public television organization they wouldn’t stand for… Read more »

Watch on SVT, they’re playing it worldwide because Sweden does everything right that America can’t figure out :p.

Rather annoying, plus I can’t stand Scott Mills. Toilet time!

Their probably doing it when Jamala sings her song in Ukrainian. Us brits won’t understand it…!

How can this be a proper serious article of Eurovision news? The BBC always does its own interval coverage! Stop trying to make drama out of nothing!

No-one cares about Ukraine or Jamala

They’re going our of their way to create something to go along with eurovision. What isn’t there to love? The interval acts are BORING. No one tunes for the interval, and I’m fairly sure it’s the part of the show that probably has the biggest dip in viewers. Anything that can be done to revitalise this awful self-righteous-promotion-of-the-host-country-spot is welcome news.

I was so annoyed about this last year. Also, Mel isn’t funny #sorrynotsorry

I like semi finals on the BBC. they have interviews and comedy spoofs and also a behind the scenes. I think its nice change to seeing all the same things. You get really insight into the whole Eurovision bubble usually. I love that they do interviews in the arena too!

Is a non-news for me. The bbc has always done what ever the f it wants. I get the alot of people were piss last year when they gloss over the refugee interval act. But was it right to put that in the semi than lovelove peace peace. Also no one cried a river when other interval act like. People dancing with robots. A cat, a dog and a horse having a day around vienna or the acclaimed azeri version of the past winning song. Got gloss over.