His older sister Luisa stood in for him at rehearsals in Kyiv last week and there are murmurs he’ll achieve Portugal’s best Eurovision result ever with his left-field jazz track “Amar Pelos Dois”. And on Sunday Salvador Sobral arrived in Ukraine, taking the time to chat with wiwibloggs as he walked the red carpet with his sister and delegation.

Despite being half a continent away from one another for the past week, Salvador revealed there isn’t too much distance between the siblings. Although they weren’t friends in their youth, they’ve grown close in their teenage years, particularly after Luisa moved stateside.

“When she moved to the United States, for the first time in my life I missed her. She was 16, I was 14 and I thought this is strange, missing my sister.”

The dynamic duo are back together now though and together coordinating Portugal’s bid to win the contest for the first time. Luisa wrote the song and has stood in at rehearsals, helping the production team perfect things for Salvador to take the stage tonight during the jury rehearsal and at tonight’s live first semi-final. Making changes without being in the arena might sound complicated, but it turns out Salvador takes it all in his stride.

He also took the opportunity to address rumours he’s been critical of other songs in the competition.

He won’t have long to wait and see if he’ll achieve Portugal’s best result at the contest. Salvador is performing “Amar Pelos Dois” ninth this evening in Semi-final 1, sandwiched between Azerbaijan’s ethnic anthem “Skeletons” and Greece’s Eurodance number “This Is Love”. 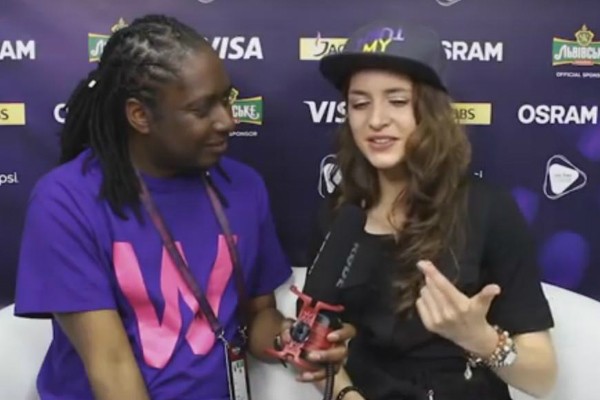 Absolutely unique and so original! God bless you with the first place!

Simply the best! Absolutely love this and gonna vote for Portugal tonight. With love from Armenia <3

Of course he’s not nervous! He knows exactly what to do: give us an enchanting performance! Simple and beautiful!
I wish all the best to Portugal!

@Hi your yucky and awful and it is a beautiful song and will get top 5 in the final .

Eurovision in country of Nazis, in such conditions the Victory Day celebration.
youtube.com/watch?v=7xUjqkqW3go

For me and I guess for all Portugal this must be the best song ever in ESC. Even if Salavador didn’t win the televote he completely conquered the whole Nation since then. He fills up big theatres and people sing the entire song. This is unheard of for our generation. The Sobral’s have awaken the interest in the ESC in Portugal, which at best was ignored by many. Every fan of the Eurovision in Portugal should be thankful for that. I, for one, couldn’t be more grateful and proud for what the Sobral brothers have delivered, even if it doesn’t… Read more »

Salvador and his sister, Luísa, singing the beautiful song of Finland, “Blackbird”

OMG! That is amazing!
Thank you for sharing that!

So sure for his song, i think he will be suprised tonight…

Wonderful musicais!! He deserves to win!

I honestly don’t see the hype behind Portugal’s entry this year. Sure it’s a nice song, but it’s quite dated, and will not appeal to the masses. However, if it wins, then I will accept the result and prepare for Lisbon 2018, as Portugal has sent some great songs over the years that could have done better, but didn’t, plus they deserve the victory after all these years, but I just don’t see it happening, unless we get a winner like Ukraine last year, and Italy win the televote, while Sweden or Bulgaria win the jury vote, but when the… Read more »

I think there’s a big difference between “dated” and vintage. When you watch a movie like La La Land, do you think it’s “dated”, or do you simply let yourself transport to another era for the time of the movie?

I love Salvador’s song because it’s very emotional, makes me want to close my eyes and dream away. 🙂

I’m done with the term ‘dated’. Each genre, whether it comes from an old tradition or is completely ‘new wave’, can give songs that can elevate you, hit you, inspire you or can evoke emotions. It’s not that, because we live in the ’10s, every style that has come before that is bad, or shouldn’t be done in 2017. I don’t care if a song is ‘old fashioned’, I do care if it’s meaningless, repetitive or sung without any soul. And I’m done with songs we heard every year since 2006: the Greece and Israel 2017-style songs. I recently heard… Read more »

This year I feel so portuguese. I love Salvador, Portugal, and Portuguese people

Regardless of tonight’s results, you are the winner Salvador and Portugal must be very proud of you and Luisa. Wishing you good health and all the best always. Enjoy because tonight and Saturday (God willing) the rest of the world will fall in love with you. Mucho éxito y vai Portugal!

Awful old Song. I hope its not going to the final. Yack

So much lobbying for some countries on this bloggs for Portugal,Italy, France, Bulgaria…
Salvador didn t won televote in his own country 2 time in semi final I (only 3 rd with televote ) and in final (2 nd place). Both time televote won Viva la Diva with Nova Gloria.
I hope that juries will not gave many points to old fashioned song from eurovision era from 1956 to middle 60 ties.

You’re annoying, get out.

“Salvador didn t won televote in his own country”

So what? This time it’s the Europeans’ turn to vote (not just the Portuguese’s), and nothing says they won’t like it.

Don’t compare the way the people vote on FdC with ESC. It’s different vote a song to represent a country meanwhile in ESC people votes in their FAVOURITE song to win Eurovision. Nova Glória it’s too eurovision patterns and don’t forget Viva La Diva was the last to perform (ofc it is a big influence for televoting). Eurovision Song Contest isn’t about modern/futuristic music, and Portuguese song is Timeless. (Let I remember you none song of this year is modern, many of them sounds like 2000’s) I’m sorry if you see Eurovision like a hunger contest with epic songs, screaming… Read more »

I am so portuguese this year! Come on Salvador! You are amazing!