There was no Calm After The Storm for the Dutch trio OG3NE following Eurovision 2017, as members of the Dutch band BLØF have criticised them for choosing “Lights and Shadows” over a song written by one of their members.

In January, OG3NE — which consists of the sisters Aimee, Lisa and Shelley Vol — made the decision to compete with “Lights and Shadows”, a song dedicated to their terminally-ill mother and written by their father and one of the girl’s boyfriends.

Although the song was a real family production, they staged a songwriting camp prior to making their decision. The camp included several nationally and internationally renowned songwriters, as well as OG3NE’s father Rick Vol.

One of the songwriters who was asked to write a a song for the trio was Paskal Jakobsen, who is the lead singer and guitarist of the famous Dutch band BLØF. He criticised their song choice in a recent interview with AD:

“On their request, I had written a song for OG3NE this year, together with an English songwriter. That one was not chosen in the end, although I still find it better than the song they chose for participating at Eurovision. It was written by their father, I understood. I am wondering why they asked all those composers to write a song in the end? Apparently they knew beforehand what it should be like.”

“Maybe I’m not allowed to say it, but choosing such a song adds some royalty value to the family.”

And today O’G3NE clapped back at the criticism, making it clear that BLØF’s contribution simply wasn’t good enough.

“You mean the attempt that didn’t even get through the first round of the selection process by unanimous voting? Sadly, it’s just all BLØF. #Ouch”

Their father Rick isn’t amused either — and he let the world know on his personal Instagram profile.

Responding to Jakobsen’s accusation that the song had been decided on beforehand, he said:

“…After reading the interview, I understood my daughters very well [for reacting that way], but personally I’m very angry. Whatever musicians/composers think of my song, everybody knows that my wife and her suffering were the inspiration for “Lights and Shadows”. It came from deep inside our hearts and it couldn’t come from deeper. A lot of people in the Netherlands embraced the song and stood behind OG3NE. How amazing was that. It should have been an indication for the men of BLØF. But compassion and empathy has turned into arrogance. It is debatable if there were another song that was better than mine, but that the royalty value was important to us is the most scandalous statement in the article.”

BLØF attempted to represent the Netherlands at Eurovision in 1998, but later withdrew from consideration.

They said that Eurovision participation is very unlikely.

“Haha. No. Impossible. You can’t play live music there…I think we shouldn’t do it. But something has changed. If you had asked me six years ago, I would have shouted ‘no!’ But after Anouk and the Common Linnets, I would think about it. It can be good for your career.”

BLØF’s guitarist Bas Kennis co-wrote Adil Aarab’s song “In Our Nature”, which was one of the five tracks in the Belgian national selection in 2016. It placed third in both the televoting and with international juries, though far behind the top 2 entries from Tom Frantzis and Laura Tesoro. 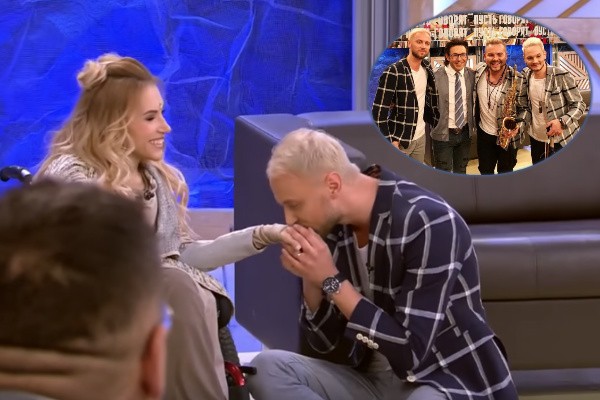 REPORT: Lady Gaga was approached to perform during Eurovision interval instead of Ruslana

If you are unsure about iOS 11 compatibility with your iPhone or not, here is a complete list of iOS 11 supported devices that can install and download iOS 11 on launch day.

vShare VIP is one of the most mysterious application available that allows you to download other applications on your device.

Apple finally released iOS 11 beta download profile for iPhone and iPad developers. The iOS 11 update is available to download. There is no need to register an iOS UDID to run the latest firmware.

It is high time that Apple updated their Maps system with iOS 11. That way, it can finally step up and pose a tough competition to Google with the help of the new drone’s technology. iOS 11 Download

We’ll never know if Bløf’s song would have had a bigger impact on the results; but once Rick Vol put forth a song of his own, it was a foregone conclusion that the family would get first priority in this matter. Or does the group believe that no other song ever had a chance, once a family member submitted one?

But then again, this band is 25 years old. Who’s to say that whatever they gave O’G3NE wouldn’t sound as nostalgic as what the girls ultimately went with? In any case, the public wasn’t sold on what they sent.

I like BLØF, but why so bitter? Maybe they didn’t know beforehand and just wanted to see what else could have been picked. Then again, I thought Lights and Shadows was kind of an average song.

It is Amy not Aimee

Holland has some jackasses 😀 who knew… in fact that song just didnt connect to the public as much as the jury’s , i think it was the running order that hurt them , the song was well ritten and composed , OG3NE sounded great , alot better then Australia and Norway that placed higher, so they should all be proud. As far as that BLOF group , we all have met such idiots at some point in our lives 😀

Did anyone hear the songs they rejected? The song they eventually performed, wasn’t very good, but it could have been the best choice. It’s a decent album track at best.

Personally, I don’t think it’s very tastefull to come to Eurovision with such a personal story… It’s an entertainment show and I wouldn’t want to entertain people with my family’s darkest stories.

What is ”royalty value”?

The money you get from royalty/copyright payments.

Aren’t OG3NE allowed to pick whatever song they want? Sounds like sour grapes from a group not good enough to get chosen themselves to me. If you are a serious songwriter, you need to deal with rejection all the time!

Well, I thought the same when the decision was revealed. When they shortlisted to three songs, I already know they were going to choose the one writen by their father. So obvious… I understand the personal weight the song has and they have strong beautiful voices, but overall the performance looked like a Christian comercial. I deeply dislike the song too.

Whatever the real truth, the system was not very transparent – so it’s understandable that other songwriters may have this impression. Both parties could have used a little more tact, though.

I believe they are kinda right. It’s not so far to have your dad write a song for you as you are more connected especially if it is written for your mother.

OGENE would have had a better chance with a better and catchier song, especially in televoting.

“It can be good for your career.”
As I said before, some acts are doing Eurovision to promote themselves rather than their countries.

How does anyone know that they wanted to pick their father’s song beforehand?

helooooo, chances are that they would pick a song written by their father and the BOYFRIEND of one of the girls. LOL.

If that was the intention from the start, why have the song writing camp?
Try thinking it through first, dude.

that was a shady answer…. ok he has a point that why to have an open call for songs while you want to pick your fathers song. The girls could have answered a bit more politely.

that pun though. I am living for this post ESC drama!

Salvador, Robin, Alex, O’G3NE, Sunstroke Project, Yulia, Manel and Jacques….at this rate only Nathan the adorable will remain shining rather than shaded.