This year more than 40 Eurovision 2017 stars graced the red carpet ahead of the Opening Ceremony. None of them are waiters or waitresses, but they most definitely served it. But who strutted down the carpet with the fiercest threads and hottest look? And who wowed you with their fashion, accessories and, most importantly, attitude? You voted — nearly 11,000 times, in fact — and the results are in: Alma from France is your undisputed queen!

Alma had to represent her country not only on the Eurovision stage, but also in the fashion stakes. And she did it with poise, elegance and sublime beauty.

The French diva was disappointed to finish in 12th place on the Eurovision scoreboard with her “Requiem”, but she brought high fashion to the red carpet and stole the show.

Clad in a waist-revealing Elisabeta Franchi gown, the Lyon-born stunner turned heads and wowed media and fans alike. The designer dress from Italy seemed tailor-made for Alma’s statuesque figure, showing off her delicate shoulders while keeping her ample assets firmly under wraps.

She told us that she chose an Italian gown instead of a French one in order to celebrate diversity, as per this year’s slogan. The black, sequinned top was joined with the skirt via a gold buckle at the waist, which drew attention to the singer’s gym-honed abs.

The Parisian sweetheart teamed the gown with a pair of Cosmo Paris peep-toe stilettos with an extra tall spike…and nothing else. No joke: Edoardo Grassi, France’s Head of Delegation, revealed in our red carpet interview that Alma dared to bare and was not wearing any lingerie. Oh la la! And we thought she couldn’t be any sexier!

In second place we find another Big 5 diva: The United Kingom‘s Lucie Jones, who secured 940 votes (or around 9%).

Dressed in a floral, floor-sweeping ball gown, the 26-year old Welsh sensation sashayed down the red carpet in style. She accessorised with a silver necklace and her trademark smile.

The special dress was designed by Charlotte Balbier, who is also making Lucie’s wedding gown. Aww!

The teenage heartthrob looked dapper in his blue suit and white button-up, which he paired with some simple white trainers. The absence of the tie made the suit age-appropriate and Brendan kept it simple, his only accessory being his undeniably charming Irish accent.

Mr. Murray picked up 915 votes, or more than 8% , making him the best dressed guy on the red carpet! Yass!

What do you think about the results? Was France’s Alma the queen of the red carpet at the Eurovision 2017 Opening Ceremony? Let us know in the comments! 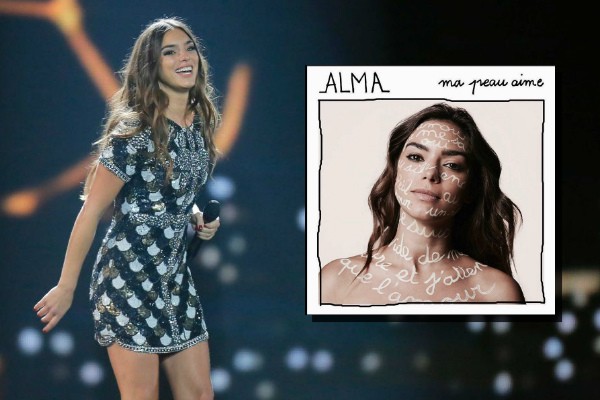 LISTEN: Amir lends his vocals to OneRepublic’s “No Vacancy”

Alma equals french elegance! She was stunning! Nailed it!

In my opinion Kasia Mo?, Ilinca or Blanche had better outfits

She was the star of the night. Bravissima, Alma!

And Grazie for promoting Italian fashion!

That’s the French charm!! 😉 it’s too bad that it doesn’t work much when it comes to voting…

Well-earned. It was a fashionable ensemble.

She wear same dress in final in parade of nations.