She’s the Eurovision 2006 singer known for her dramatic styling and her reputation as the Queen of Balkan Pop.

And on Monday Severina continued to slay her way through the music scene with the release of her latest music video ”Mrtav bez mene” (Dead without me).

The dark and honest track features Severina’s signature ethno edge and is the third single from her upcoming album, which will be released in two parts — the first in July, the second later this autumn.

The opening lyrics, which have caused quite a stir in Croatia, set the tone as Severina exacts the trauma and triumph of love:  “I regularly dream of choking you with my teeth, pulling out your heart with my hands and putting it on the ice.”

Pulling out someone’s heart but keeping it as a warm memento — relationships make you do the darndest things!

Sung in Croatian, the track showcases Severina’s strong yet sexy vocals, which fit perfectly with the melody. Even if you don’t speak the language, you’ll feel the strength of a warrior. And that makes sense given the ominous threats present in the lyrics.

”Do you know you’re dead without me?” she sings. “You’ll live without your shadow and cut your body everywhere, where those kisses are crazy.”

Written by Marina Tucakovi and Damir Handanovi, the song translates well to the music video, which was directed by Darko Drinovac.

As ever, Severina serves face and body, slipping into a number of fashion-forward pieces that show off her many assets.

Yet despite the pouting, expressions of torture and dramatic choreography, there’s a sense of minimalism, even as she crouches on a table in a black slip negligée. Stripped down and pared back, this really packs a punch.

Severina placed 12th at Eurovision 2006 with the song “Moja Stikla”, which was more overtly folksy than Severina’s recent offerings.

As her career has moved from strength to strength, Eurovision fans have repeatedly called on her to sing at Eurovision. Now that Croatia has managed to make the Eurovision final for two consecutive years, it’s more conceivable that Severina might consider giving the contest a go. We’d all be served well if she did!

What do you think of Severina’s “Mrtav bez mene”? Shout out your thoughts on the wiwibloggs app, or let us know in the comment section below. 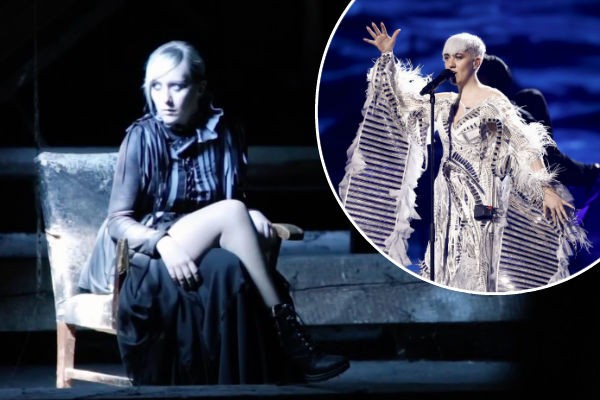 Severina’s songs are getting better and better. She is amazing. Hope to see her back someday with a song like this one. <3

Off Topic:
Lena’s new song If I wasn’t your daughter!
She was on a TV show Sing my song last night and went straight to 1 on iTunes in Germany that night. Beautiful Song and so sad.

What happened to her father?

He left the family when Lena was 2. It seems that he does Not care about her.

Better translate.. you’ll live without your shadow and cut yourself everywhere where she kisses like crazy:)

This is a masterpiece!! I love it!!