Eurovision 2017 was a bumper year for stage props, with many countries getting highly creative in their staging. But why should appreciation for these props end at Eurovision? Here are ten props we’d like to see given a second chance and auctioned for charity. Fuss and fight won’t get you tons, but it will get you Dihaj’s surreal set. As the blackboard says, it’s all about fantasy. You can make believe you’re a schoolteacher who’s had to call the janitor to change a lightbulb. He’s fixed the light, but being half-man, half-horse, he won’t come down from the ladder until you give him some carrots and tell him he’s a good horsie. Chalk not included. 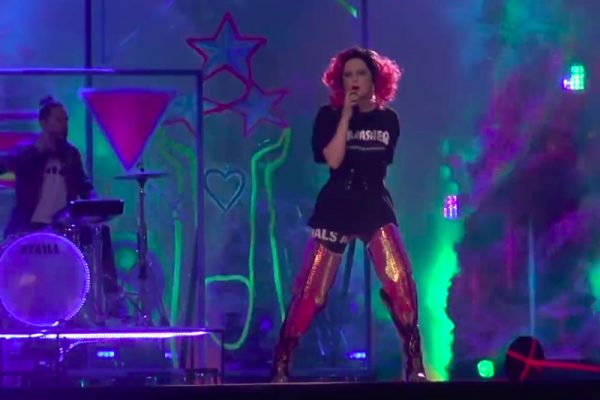 At first glance this transparent board seems to have been decorated with a likeness of Riga’s iconic Freedom Monument. But with just a flick of the lights, details change and suddenly it looks more like yer classic cock and balls graffiti in all its urgent masculinity. But does it have to be one or the other? Get you a staging backdrop that can do both! The real moon is nice and all, but it’s pretty lame how it just hangs out in the sky, getting bigger and smaller every month and controlling the tides. Instead here is Nathan Trent’s far superior moon. It is covered in tiny mirrors! You can sit on it, stand on it and — if the mystical smoke has been summoned — you can enter a higher state and walk on air. Literally. No tricks. Please note: there was also a little plexiglass table that came with this, but we’re not sure what it’s for so we’re using it as a coffee table at Wiwi HQ. Has it been a long day performing in high heels? Do you have tired, achy feet? Demy’s foot spa is the answer to your troubles. Now you can relax your tired toes in a little splashy pool. The foot spa comes with two eager man-swan attendants. Do you love the romance of hot air ballooning but suffer from a crippling fear of heights? This could be the answer to your woes. Brendan’s hot air balloon will let you experience the charm of a balloon ride without ever having to leave the ground. Just watch out for overheard power lines, ok? As far as artillery equipment goes, cannons are pretty awesome. But they’re even better when they’re covered in disco mirrors. Spice up any party with this Romanian disco cannon. Your jealous friends will be like “Dude, there’s not really any room here for it. Where is everyone going to sit?” Please note: disco cannon does not shoot confetti, but an animated gif of a cannon firing glitter will be provided at no extra cost. O.Torvald’s giant head makes the ideal gift. You know why, though? Because as you present the giant head to your friend, you’ll be able to say, “Never let it be said that I don’t give good head!!!!!!” Just imagine how hilarious that will be. And because your friend will have nowhere to store the giant head, they’ll be forced to regift it to someone else and will thus again utter that golden line. The circle of life continues. Want to go somewhere but you just can’t be bothered walking? Robin Bengtsson’s treadmills are the answer to your problem! Now you — and four friends — can travel up to two metres without even breaking a sweat. Jump on at one end and this modern technology will magically transport you a short distance within seconds. Assembly required. Which props and costumes would you like to see auctioned for charity? How much would you pay? Share your thoughts below! Fino A Che Volerò! Nathan Trent is running on air in Italian version of his Eurovision 2017 song

I want the glitter-pot of Joci

Ah yes, the long winter nights in new zealand must fly by when your dreaming up wiwiblog articles.

Some props you missed…..Levina’s hairspray can, the russian wheelchair, Manel’s last place award, NaviBand’s boat that sunk in final from the male’s toneless croaking, Montenegro’s suit, Blanche’s malfunctioning non-existent orb of light that never appeared and left her all alone and the seedy lights, Salvador’s tiny violin that was playing when he railed against fireworks and fast food music

I want none of those. I’d prefer Lucie’s huge mirror

Is Blanche’s dress considered as prop? Because if it is, please take my money so I can burn it.

Switzerland stairs are good if you have small dogs that want to look out the window.
Off topic – If I’ve learned something from this year’s esc, is that Crimea is such an important cultural center………..
everybody who’s anybody has been there…hahahahaha
People in Crimea must be full of culture and spirituality hahaha

Oh yeah, that spirituality. To come for cheap wine and to get to some monastery that’s been reclaimed after greeks were thrown out of peninsula, while reading politcorrect crimean history. Most beloved tour by average russian who never saw some Turkish resorts 🙂

I’d buy Isaiah’s circular treadmill to take the grind out of unstacking the dishwasher and putting away the glasses … if it would fit in my kitchen …!

I know it’s probably important, but what do you think the going rate is for Joci Papai’s milk jug? 20 Euro since it’s blinged out?

Definetely Timebelle’s staircase would be beautiful for my house!
And the saxophone please!

I don’t want either alone, but if a deal can be made to have the NaviBand skimmer rendezvous with the Lucie’s glam-clam at sea, I am IN

What about the hosts? They’d look great in a wax museum.

The most epic and saxiest sax of course! Take my money now!

ANSWER: All of the above. 😀

I want Miruna’s and Blanche’s dress.

None of those. Although I’d be willing to buy Naviband’s boat!

I agree with everything except the sax. An instrument is something else, it could be like Edvin Marton’s violin (Russia 2008) that is 7 millions dollars Stradivarius. I don’t think the sax is 300 years old, but for musicians the instrument is very important.

I bid the Gorilla of Italy for $10 please

That was part of the problem Niel, it only looked as if it was worth that much

Lucies mirror was the best prop. I would love to have one like that 😉