On June 20 he released “Fino A Che Volerò” — the Italian-language version of his Eurovision 2017 song “Running on Air”.

And on Friday morning Austria’s Nathan Trent said sí to another take on the catchy track, this time releasing it in Spanish.

"Aire" is finally out! I hope you like it! Link in bio and here https://www.youtube.com/watch?v=DYYhGchCrfM and Listen to it on @spotify A todos los hispanohablantes, gracias por vuestro apoyo y el amor que me dais! Esto es para vosotros! #aire #verano2017 #español

The translation is smooth and on-point, fitting with the rhythm and giving the song a somewhat sensual undertone. The theme of perseverance remains central, but we’re too lost in the lovely sound to ponder that idea too much.

Of all the versions of the track, this is the brightest and most spirited — and one definitely worth a download. So put on your sunglasses, pour the coconut water and take in that Ibiza spirit!

Nathan, a master of the tongue who speaks five languages, consistently wowed us with his English skills throughout the Eurovision season.

So with the release of today’s track we just had to ask him to rank his skills with his various languages.

“Well I’m half Italian (I learned it parallel to German), so I’d say my German and Italian are the strongest,” he tells us. “Then English, then Spanish — I learned it at school and I have some Spanish-speaking friends — and then French.

What do you think of Nathan’s latest version of “Running on Air”? Which is your favourite? And what language do you want to hear Nathan sing in next? Let us — and Nathan — know in the comments box below. 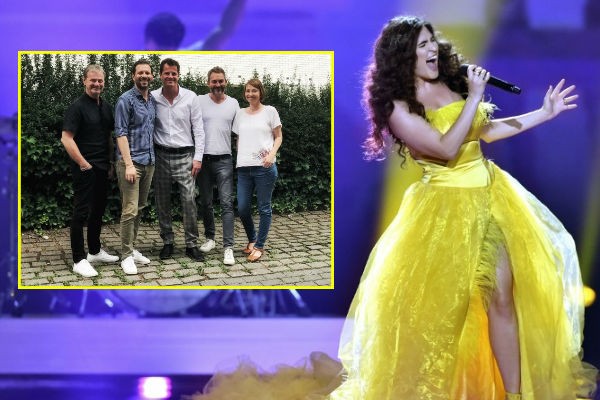 really? sometimes you should know when to say stop. 5 languages, countless covers, one song and nil points.

That’s the struggle for staying relevant, my dear. 🙂

btw. Austrians have a natural talent for other tongues. I am not half Italian, but I do speak English, French, Italian, Spanish and Czech. If you threw me out on the streets of Portugal or Netherlands, I’d be fine too. I have many mates that speak a lot of languages.

The Nathan/Manel shippers are gonna go crazy over this one

What a cool summer breeze. The televote results were certainly also due to the the bad starting slots…

Much better than the English version!

Some of the lyrics are a bit strange for native Spanish speakers. The construction of some phrases or the use of some expressions, could be distracting as a Spanish.

Anyway, Nathan is still a great artist and a better person. Thanks for bringing us this new version!

I know right, I’m Spanish and he kept using the word “Yo” which means “I” but we don’t really use “Yo” unless you cannot tell what gender/form it is.