It’s that time of the year again, beautiful people! This tired Icelandic housewife makes her unavoidable list of the hottest guys of this year’s Eurovision Song Contest. And yes: I disagree with most of you. Over the past four years I think we’ve established that I’m a special flower on Team Wiwi and my taste is nowhere near the so-called “norm”. #CelebrateDiversity and inclusion — of taste and attraction!

Eurovision 2017 was swarming with men. It was probably the most versatile collection of guys so far, and I really had a hard time deciding who would make my top five. But after long consideration — and a lot of wine — here we are. Before we start, I just want to say that I need this. I wasn’t in Kyiv (silent cries) and this is my outlet!

Daaamn. That boy portrays the best of both worlds — Mediterranean heat mixed with Armenian fire that is almost too hot to handle. I was already a fan of Hovig prior to the contest and when I saw just how well he pulled off those dance moves to “Gravity” I was sold. Completely! He can be my heart and my company any day of the week. Just tell me when, Hovig, and I’ll let you be MY gravity!

When I was a teenager, I, like Lasse, was a piano playing geek. I relate and am attracted to geekiness all the way! This talented and good-looking Finn is hooooooot (and musical and clearly in touch with his emotions to write a song like “Blackbird”). Oh, I am also attracted to Finnish men, and Lasse is Finnish through and through — from the minimalist styling to the apparent stoicism to the pale to paler colouring. I’ve had the giggles since February, no joke, and it’s all because of him. Kiitos for being you, Lasse.

Aaww yeah, we’re still in Scandinavia. Winter is coming and the force was strong with the Nordics this year! Aleksander epitomises the hipster/lumberjack type. And I have such a thing for that type! He looks so strong and manly, kind and…and..and he can definitely cook! I’m sure of it! Aleksander is simply gorgeous. Even though he threatens to kill, kill, kill…Wait a minute, he’s got a bit of a bad boy vibe too? Oh be still, my beating heart!

Yes, all three of them. And yes, I am probably being greedy now. Yes, yes, yes…I know, I hear you, but in my defense, they ARE a trio and to leave one out, when they’re all alluring AF would be stupid and pointless. So, Sergei, Sergey and Anton come in strong as the runners-up on this list, because….wow!! Those moves, that voice, that……hip thrust with the saxophone ….Swooning!!! I need to sit down now.

Mi amore Francesco! Quirky and fun with a mischievous smile, and a memorable presence in every way. I was totally smitten from the very beginning and if he would at any point offer me a cup of coffee or a bruschetta, I would say “Si!” faster than Trump could say “FAKE NEWS!” Hell, Francesco could probably offer me roadkill and I would take it. Does that sound a little bit off? Hmmm, yeah, but I’m okay with that, because I am at peace with myself. Namaste! 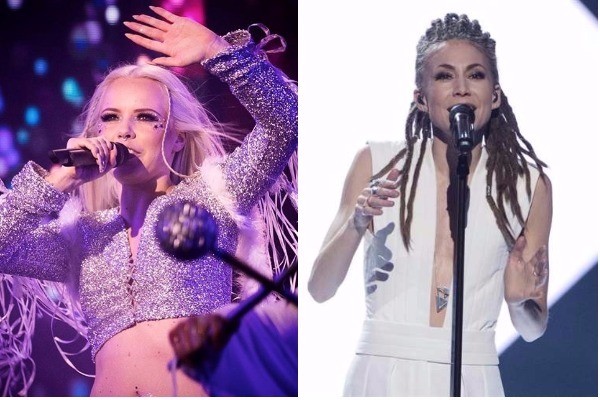 Is this the nightmare icelandic woman from the escnation forums who won’t shut up about men and every other thought that crosses her mind?

Gippa
Reply to  Fed Up

You’re too fed up. Relax.

When will we see the top 5 of hot women, made by male Icelandic ESC-fans?

Wiwibloggs is far to gay biased!

Music is the key
Reply to  Kermit

So true! Nothing wrong with gays. But there is a lot of straight male fans. And lots of female fans. It’s so silly how some sites / ESC_fans try to “make” ESC a “gay event”.

A pity that they so often underlines these stereotypes. Not inclusive.

Some of the Wiwi-articles are great. But this thing annoys a lot of people. I know, many have commented on that different places.

So let’s hope for a change please 🙂

Iberian
Reply to  Music is the key

For God’s sake. You’ve got enough “straight events” all year long – and nobody moans about this. So if ESC is considered a “gay event” that is fantastic. Deal with it! And no, there are not many straight ESC fans.

Iberian – you seem to be one of those heterophobic fans who only wants ESC to be for “your people”. Get out of your bubble. Why is it so “fantasitc” is ESC is gay? since when does it make it more inclusive and popukar? Of course not. And it’s NOT gay!

I know a lot of straight male fans. Only in my city. And lots of females…I more wonder how many fans you actually know.

Stop behaving as gays own the ESC…they don’t

Oh yes, everybody says this about Eurovision: “It’s such a gay show.” And we love people saying that. It’s ours. Get over it. There may be a couple of straight males who watch it, but they’re not die hard fans.
And noone is going to tell me how to behave, it’s sad you can’t not accept the truth, but ESC is considered the “gay olympics”, whether you like it or not. You must be blind if you don’t see that most guys in the public at the ESC shows are gays, which is fantastic.

There’s room for everybody. Stop fighting.
It’s the Olympics of music, not the gays. Gays can watch and participate in the original Olympics as well.
Let’s celebrate together!!!

I am a Real Housewife of Romania and I want an article of my own, b**ch please! To prove my point I’ve made a top 10, not only a top 5… OK??? 10. If I’d be into Ken dolls I’d obviously pick Robin Bengtsson. He seems too perfect… Perfect face, perfect eyes, perfect smile…. Too bad he looks kinda plastic, too…. 9. Hovig – The Cypriot beauty with Armenian roots made quite an impact. He’s got beauty, he’s got style…but unfortunately there were others who caught my attention this year… 8. Koit Toome – He may have missed the final… Read more »

No doubt that Francesco is the most hot and charismatic singer in Eurovision this year!! You have to see the videos and photos his fans have spread all over instagram! That guy exudes hotness when he´s not even trying!! ahahha That smile and those sparkly eyes like a little kid enjoying life, that precious sense of humour, intelligence and the love he puts when he shares his passion doing music on stage! Ohhhhhh and when he is wearing only a simple white t-shirt, jeans and playing is red guitar like he´s having an orgasm and making love with music on… Read more »

A little goodie of Francesco´s hotness, talent and charisma on stage to all of his fans 😉 https://youtu.be/hBCzL2oysn8?list=PLCm4jRdnxpWacCNf7FiMBH5ouIWzq5MAA

can you please comment Francesco’s hotness in this photo? Caution!! not recomended to kids or sensible housewifes!! ??? https://www.instagram.com/p/BWGaJ7Llofl/?taken-by=dolcegabbanipt&hl=pt
ps. I really like this article, is very good being a “little bit off” and funny sometimes! The best moments we can get in life! 😉

Definetely agree with #1.
Francesco is the most adorable guy! And so talented!
I’m not a fan of Scandinavian guys this year.
Yes to Sunstroke Project (all of them) and Hovig.

If I’m honest, I miss Imri in this list, he’s so handsome.

Oh my… That’s so weird! For two consecutive years we’ve got the same winner, Francois and Francesco! 😀 Same rare kind of taste 😉

Icelandic housewives obviously have good taste. I approve of this list.

Well, Francesco definitely is the embodiment of Italian charisma. So I see her point.

Finland and Norway? Over Israel? No way!
And the Nordics weren’t strong this year, Kristin; only Sweden and Norway were.
The other three failed another time…

Agree on Italy tho xD

I totally agree! Francesco Gabbani is the hottest and the most charismatic singer!

Yas, go girl! I was so meh about the Eurovision next top model male poll. 🙂

Hi Kristin, I know you like rock so I was expecting some O.Torvald.
Maybe next year will be more rock bands.

Music is the key
Reply to  Robo

Same here! We need more rock in ESC! A pity there wa only ONE real rock song this year. However, one is better than 0

She has the same right to say her opinion like Susanne Adams.

Hey it was fun. And I’m always pro housewife rambling on about things regardless of the top.

Melissa — the story points out that Kristin does this EVERY year. It’s a tradition. She isn’t a RANDOM Icelandic housewife. She’s a wiwiblogger who reflects a different demographic than the stereotypical Eurovision fan. That in itself makes it interesting. But you sound a tad too limited to understand that. Pointless? That would be YOU.

Weirdest article on Wiwibloggs ever, ever, ever!!!

Because it is a bad thing. One of those “Let’s make esc gay again attempts”

Some people seem to love those silly esc-gay cliches, which media / some gay fans have created. So one dimensional, unfair and far to exagerrated