He’s a former host and three-time participant of Melodifestivalen. Now Swedish media is reporting that David Lindgren will again return to host Melodifestivalen 2018. But there’s a scandal brewing — the Melfest team’s choice for David’s cohost was nixed by SVT management.

The hosts of Melfest 2018 have not yet been officially confirmed by broadcaster SVT. However, Aftonbladet reports that multiple sources have confirmed that David Lindgren has been signed up for an encore hosting. This follows his co-hosting of Melodifestivalen 2017, where he joined vlogger Clara Henry and legend Hasse Andersson.

But there’s no news of who Lindgren’s 2018 co-host (or co-hosts) will be. But there has been some Mello-drama.

Aftonbladet reports that a potential co-host was at the top of Christer Björkman’s wishlist. But SVT put their foot down and denied the casting. The broadcaster reportedly did not consider the potential host — a comedian and actor — to be right for Melodifestivalen.

This decision caused chaos in Melfest HQ, and has required a rapid rethink of other potential hosts. SVT is said to be in negotiations with at least one other person who will be David’s co-host when the Melfest 2018 tour starts in February.

The full lineup of Melfest 2018 hosts will be revealed by SVT at a press conference at a later date.

David Lindgren first appeared at Melfest as a contestant in 2012, when he placed fourth with “Shout It Out”. He returned the following year with “Skyline”, which placed eighth. His third Melfest appearance was in 2016, when his song “We Are Your Tomorrow” placed 11th.

David Lindgren made his Melfest hosting debut last year, along with Dirawi and Hasse Andersson. Lindgren blended both comedy and musical talent in his hosting, including his show-stopping medley of Melfest classics. He also licked Robin Bengtsson’s face.

What do you think of David Lindgren returning as Melodifestivalen host? Who should be his co-host(s)? Or should David do it solo? Share your thoughts below! 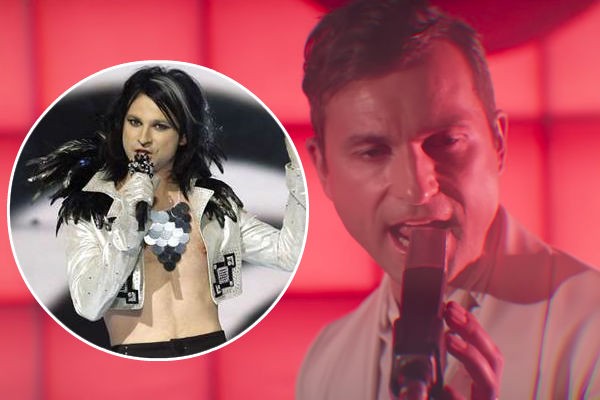 He was great last year!

Great news and I hope SVT will choose the right co-hosts except Zelmerlöw and Dirawi. My favourites would be Petra Mede and Ola Salo.

David is very charismatic and entertaining to watch at Melfest. Whether its on stage performing, doing interviews or just reacting to getting points he’s just always full of fun. I’m so glad he’s now a host.

he can be OK, but to be honest, some of his “jokes” last year was quite lame and stereotypical. WHich can be blamed on the scroipt. Hasse was fun though!

Him again? None of the 2017 hosts were great, quite boring. Why not Måns?

Great choice, Lindgren was a funny and talented host last year. As cohost, they should bring robin back so he can have his vengance and lick David by surprise 😛

You are right! Somehow I thought she was only one of the guests in 2016 – but no, she did every single show, like the champ she is. I’ve updated the post 🙂

Hi Robin. I think there are two little mistakes with this article.
The right spelling of Gina’s surname is Dirawi, and for the last paragraph Lindgren hosted Melodifestivalen 2017 with Clara Henry and Hasse Andersson.

Thank you! Spelling someone name right is so important and respectful. I have corrected those. 🙂

That’s a great decision, David was a great host!