He’s the performer who represented Russia at Eurovision 1995, and is also known as a producer and songwriter. Now the maestro Philipp Kirkorov has been awarded Russia’s prestigious Order of Honour medal. The honour was presented by Russian president Vladimir Putin.

The award is presented to Russian citizens who have made high achievements in the field of either economic, government, public, scientific, sociocultural, sport or charitable work.

It can specifically be aimed at those who contribute to the promotion of Russian culture, and for “very fruitful public, charitable and community activities”.

In Kirkorov’s YouTube description of the award ceremony, he notes the honour was for “his great contribution to the development of a variety of arts of the country and many years of fruitful activity.”

Putin pinned the medal to Kirkorov who had dressed for the occasion in a black velvet blazer from Dolce & Gabbana. The blazer is part of D&G’s recent Heraldic Sicilia collection, which pays tribute to the crests of aristocratic Sicilian families.

The award was initially confirmed on 30 April, Kirkorov’s 50th birthday. At the recent ceremony, Kirkorov had the opportunity to make a speech, where he profusely thanked Putin and wondered if the president was a fan of his music. He told Putin and the audience:

How much you have done for us, for our country, can not even be understood. But we try not to lag behind, and in my jubilee, at 50, I also tried to do something for people, for the theatre, for the musical stage. Thank you very much, this award is a very important sign for me that you sometimes listen to music that is for the mood.

As well as representing Russia at Eurovision 1995, where he placed 17th with “Kolybelnaya dlya vulkana”, Kirkorov has built a behind-the-scenes career.

He has co-written several Eurovision songs, sometimes as part of the so-called “dream team” with Greek maestro Dimitris Kontopoulos. These include “Work Your Magic” (Belarus 2007), “Shady Lady” (Ukraine 2008), “Shine” (Russia 2014) and “You Are the Only One” (Russia 2016). Kirkorov has also served as Russia’s Head of Delegation.

As well as his Eurovision contributions, Kirkorov has built a substantial music career in Russia and still enjoys a career as a popular entertainer.

However, it hasn’t always been smooth sailing. In 2010 he was accused of slapping, dragging and kicking a female assistant when he was unhappy with the lighting at a concert.

Kirkorov initially denied the reports, but later sought a psychiatric assessment in Israel, before releasing a statement saying, “Twice a year I have serious attacks, when I do not remember or understand anything that I do.”

He later returned to Moscow and was declared mentally sound. 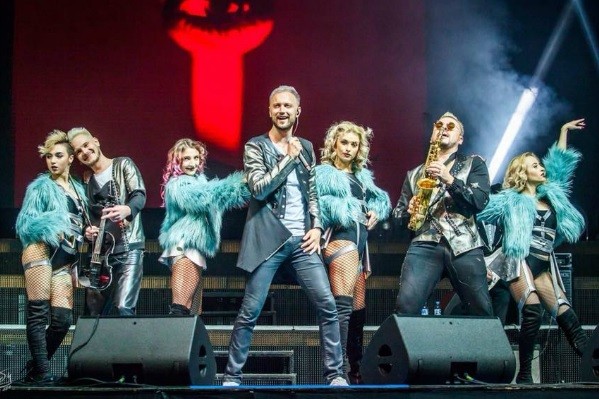 Kirkorov is a disgusting person. A person who verbally insulted female journalists on several occasions, physically assaulted a woman, a show director at the Kremlin concert palace, verbally assaulted gays in one of his track (though being a gay himself) would never obtain that much attention as he gets here on “usefulidiotsbloggs”.

WTF Wiwi? What’s next – Debbon having a cosy beach-side chat with Robert Mugabe?

Unfortunately, the West is full of useful idiots ready to spread Russian messages. Sometimes they are conscious collaborators. All this in spite of a hybrid war going on.

Philipp Kirkirov is not a very likeable person, I’m afraid, despite writing some great entries. A shame to see him taking an award from the man who instigated the evil anti-gay laws, and turns a blind eye to the horrific violence against gay people in Chechnya…sigh.

What is your opinion based on?

Congratulations! So happy for him 🙂
Also, thank you Robyn for your amazing work and contribution to Wiwibloggs! Not obvious at all ?

How can you compare the organiser of a festival (Bjorkam) with a legend like Kirkorov?

You know the sad thing is that he is Bulgarian born in my home town of Varna and we are not happy with Kirkorov at all. Russia only tries to mess with us all the time.

Bulgarian born Armenian, although Armenians don’t really like him. They don’t even let Kirkorov to tour in Armenia.

Putin is a crook! Any award presented by him is a joke

Why does such protection always include terrorizing neighboring countries?

What country are you from? Who is your country leader? Is he a crook? Will you ever call him this name? Why do you feel free to insult Russians who are reading this blog?

OMG how tall is that guy?

Do you want news about Melofestivalen, that mean nothing, because are only rumors? What news do you want?

There’s literally not been a post about Russia in a week. Chill out

Oh please there hasn’t any post about Russia for a week now. Don’t narrow it out to a single country.

Robyn! Good job on writing these blogs! I’m proud of you! Also I’m excited to read the JESC reviews of all songs.

Are you kidding me? No other country receive so much attention from Wiwi. I’m disappointing.

In comparison, Sweden was mentioned twice as often as Russia.

This is such a soap opera. I can’t wait to see the artist for Russia 2018.

It won’t be Julia. That is for sure.

Guess. You’ve already seen her a bit more than half a year ago. Nothing has changed.

“He’s the performer who represented Russia at Eurovision 2015” – Robyn, do you mean that Kirkorov is Polina Gagarina’s alter ego ?